Stallions have sights set on competing for state title. 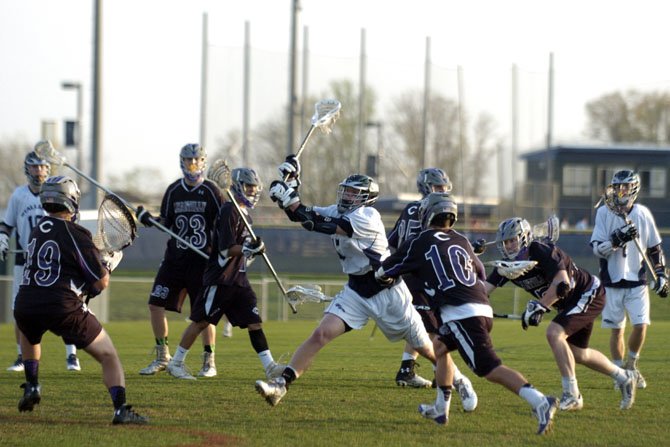 The South County boys’ lacrosse team still has plenty of work to do in order to fulfill its hopes of winning a state championship. On Tuesday evening, however, the Stallions proved they deserve to be mentioned as a title contender.

South County jumped out to a 4-0 lead and never trailed during an 8-6 victory over defending state champion Chantilly on April 22 at South County High School. Both teams entered the contest undefeated, but it was the Stallions who took control early.

“It means a lot, but you can’t let it get to your head,” senior midfielder David Symmes said. “… It’s just a statement win. It shows we’re contenders.”

SOUTH COUNTY handed Chantilly its first loss since the Chargers fell to Madison in last season's AAA Northern Region championship game on May 24, 2013.

“I think it just puts us in the conversation right now as one of the best teams in the region,” said first-year South County head coach Dale Nalls, who spent last year away from coaching after leading the Mount Vernon boys’ program from 1994-2012. “That’s where we want to be; we want to be in the conversation as a team that’s going to be a tough out, hopefully, when we get to the playoffs.”

Players on both teams struggled with footing after first-half rainfall left the grass playing surface slick. South County managed to build an early lead, however, starting with Symmes’ first goal less than 2 minutes into the contest. Sophomore midfielder Nate Cho and junior attackman Austin Fitzmaurice also scored in the first quarter, giving the Stallions a 3-0 advantage.

Quigley scored in the opening minute of the second quarter, extending the Stallions’ lead to 4-0.

“With our physical abilities, we use it to our advantage,” Symmes said. “I think we have a faster tempo than any team out there, in my opinion. We really beat people into the ground. We’re relentless.”

Chantilly junior midfielder Colin Meehan got the Chargers on the board with a goal at the 9:08 mark of the second quarter and senior attackman Jonathan Popham added a goal with 6:33 remaining in the first half, cutting the South County lead in half. Fitzmaurice responded with his second goal in the final minute of the second quarter, giving South County a 5-2 halftime lead.

SYMMES’ SECOND GOAL gave South County a 6-2 advantage with 8:21 remaining in the third.

Symmes, who will play college lacrosse at West Point, broke the shaft of his stick while contacting a Chantilly player in the second quarter. Symmes used the shaft of a teammates’ stick to fix his own and returned to the field to score his second goal.

“He’s vital to our offensive success,” Nalls said. “He draws shutoffs --- they were shutting him off for a lot of the game. Other teams have to game plan for him so that sometimes throws their own players out of sync a little bit. When that happens, then other players on our offense benefit and reap the rewards. … It wasn’t just David, but David creates mismatches for other guys and that opens things up for Nate Cho and Kevin Quigley and Austin Fitzmaurice and David Krein and Tyler Alexander.”

Goals by Chantilly’s Zach Gilbert and Nick Jung cut the South County lead to 6-4 in the third, but the Stallions extended the lead back to four with goals by Krein and Quigley.

With the win, South County improved to 9-0. The Stallions host Osbourn Park tonight and will host Lake Braddock at 7:15 p.m. on Friday, April 25.

“Really, the district is sort of looking at the small picture to us," he said. “We’re looking for something bigger --- state championship. If you’re going to go to the state championship, you have to compete with teams like Chantilly.”

Chantilly dropped to 9-1. The Chargers face Yorktown tonight and will travel to face Woodson at 7:15 p.m. on Friday, April 25.