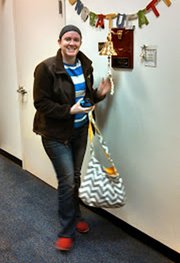 Erin Kelly after her last radiation treatment on Tuesday, Nov. 19, 2013.

Arlington — Erin Kelly spends her professional life tending to critically ill children as a pediatric nurse on the cardiac intensive care unit at Children’s National Medical Center. What patients and their parents may not know is that she has spent the last three years in her own health battle, one with a stubborn brain tumor. The 26-year-old Arlington resident will be running the National Race for Hope on May 4, a 5K run in Washington D.C. that raises funds the National Brain Tumor Society.

Kelly, a native of Massachusetts, moved to Arlington in 2009 to work at Children’s Hospital. Two years later, she would begin to experience symptoms that would force her to spend much of her personal time in medical centers.

“I went to see a doctor in November 2011,” Kelly said. “I had symptoms for six months. I just had headaches to start with, and then it got progressively worse. I started throwing up and had headaches every day. The doctors kept telling me I had migraines. What made me go see a neurologist were changes in my vision.”

Kelly said that symptoms of brain tumors can vary, and she did not even experience seizures, a very telling sign of a tumor.

She sprang into action with her treatment the second her neurologist at Washington Hospital Center mentioned the word “tumor.”

“I had been up for almost 24 hours and Johns Hopkins [University Hospital] was at that point the closest to me,” Kelly said. “My doctor wanted me admitted that night. They didn’t even have an initial read, so they had me go to the Emergency Room at Hopkins right away.”

Kelly wasted no time on wallowing. She said she was glad in some ways to finally be confronting the issue head on, and that she had not been imagining the symptoms she had been enduring for months.

“I almost felt a relief because for so long I felt like I was making up those symptoms,” Kelly said. “It kind of all clicked in my head. I didn’t have to see the MRI to believe it. I just knew what it was.”

Kelly had surgery at Hopkins that was supposed to rid her brain of the tumor. She said she was supposed to be in the clear for another 15-20 years. The foreboding headaches returned, though, 18 months later.

“THAT’S WHEN I had my second surgery, this past summer at Hopkins,” she said. “Then I went home to Massachusetts after that.”

She spent a few months at home for chemo, radiation and other treatment. She returned to Arlington and her job at Children’s Hospital as soon as she could. She feels her time is better spent helping her patients at work than dwelling on her own issues.

People can donate to Onward with Erin at:

“I have been back in Arlington since December,” she said. “I left Massachusetts a week after I finished radiation. I would much rather be thinking about other peoples’ problems than my own.”

Kelly said a lack of research contributes to doctors being in the dark regarding her prognosis, and that she hopes much more is done in the next decade so that there will be more hope for her and other people facing brain cancer.

“They honestly don’t know my prognosis because there are no studies on it,” she said. “There are no large sample groups and outcomes vary widely among people who have it. So, they hope it’s good and that they were able to get the entire tumor out. We hope so but there is no prediction.”

Kelly still has two rounds of chemotherapy ahead of her. Between treatment and other doctors’ appointments, she maintains a positive attitude and a normal routine for a 20-something.

“I just don’t let it interfere with my day to day,” Kelly said. “I Iive my life as if I had never been diagnosed. I do what I need do to treat it, but don’t let it run my life”

She participates in multiple fundraisers and events for the National Brain Tumor Society. Her current efforts include fundraising for the Race for Hope in Washington D.C. on Sunday, May 4, and the Boston Brain Tumor Ride on May 18.

Kelly’s friends put together a team, Onward with Erin, for the 5K. This is her first year doing the road race, though she and her family have made the Boston Brain Tumor Ride in Massachusetts an annual event.

KELLY’S COWORKER and friend, Betsy Focht, started the race team in honor of her friend, who she said is impossible not to admire.

“I have so much respect for Erin, as a friend and a co-worker, so I was really, really upset when she told me the tumor had come back,” Focht said. “Over the last several months, I’ve watched her plow through her recovery from brain surgery and then treatments with nothing but strength and grace. She hated missing work after her surgery, missed her patients and co-workers and looked forward to coming back as soon as possible. I don’t think I’ve ever heard her complain about the circumstance she’s in. She just keeps going, dealing with things with a smile.”

Focht said she and her husband couldn’t think of someone better to rally around for the Race for Hope next month.

“I thought starting a team would be a good way to gather friends, family, and co-workers to celebrate Erin's hard work and progress, and hopefully raise some money for a worthwhile cause,” Focht said. “‘Onward with Erin’ was the team name that best reflects her continual, inspirational progress.”

Team Onward with Erin’s fundraising goal is $1,000. Kelly’s goal for the Boston Brain Tumor Ride is to raise $2,500 for the National Brain Tumor Society.

“They are very, very far behind in research, so whatever money can be raised is great,” Kelly said. “Brain cancer has one of the lowest survival rates. We need more money for the Brain Tumor Society. Right now, we have done the maximum treatment that we can. For now, anything more is experimental.”