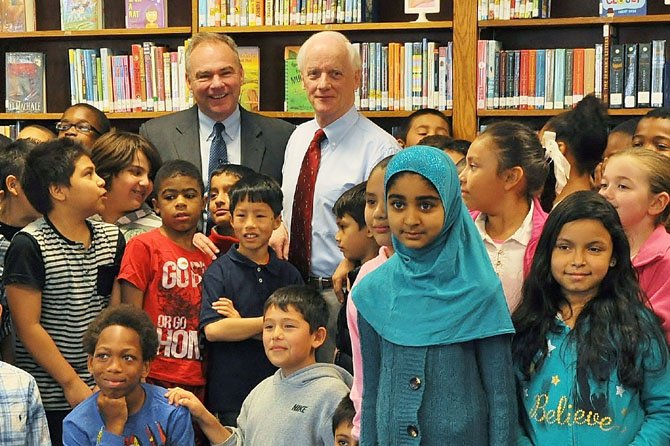 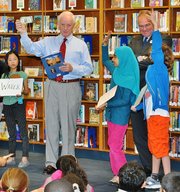 Former Oklahoma Gov. Frank Keating, president and CEO of the American Bankers Association, held up a dollar bill as a prize for the student who correctly answered the question about how many terms President George Washington had served. Student Iris Porter (left) represented the budget item Water, Alisha Hassan held up the sign for item Pet and Luke Selnau represented item Bike during the financial lesson held by Keating and U.S. Sen. Tim Kaine.

U.S. Sen. Tim Kaine and former Gov. Frank Keating, president and CEO of the American Bankers Association, visited Hollin Meadows Elementary School on Friday, April 11 to teach a financial literacy lesson to the school’s fourth graders. The event was sponsored by American Bankers Association and was part of its 18th annual Teach Children To Save Day.

Kaine and Keating gave lessons on the basics of saving, the benefits of creating a budget and conceptualized how interest helps money to grow. Students were selected to represent various budget items in a lesson that illustrated the difference between needs from wants. Students were asked to compare the wants of buying a bike with the needs of paying for water. All the students actively participated in the discussions, demonstrations and question and answer sessions.

“The kids were astute on all the answers,” said Kaine. “They’re so bombarded by so many commercials” as he described the influences that affect children’s spending habits today. “Trying to save money is difficult.” However, he noted that this generation has “lived through the bust” and that new “laws make it harder to borrow so much.”