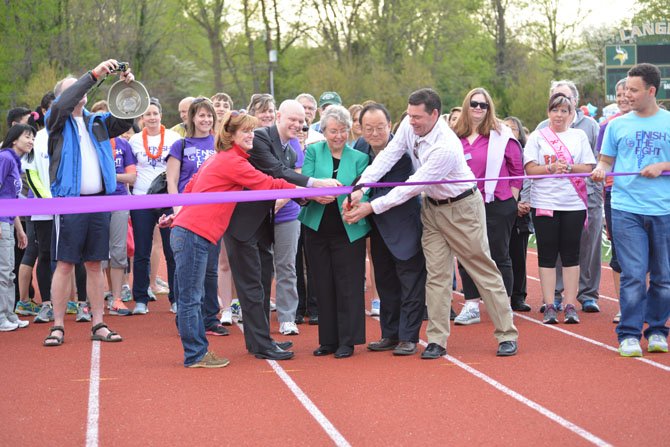 From left, the leaders of the 2014 Relay for Life to Fight Cancer, Langley High School event Co-Captains Harris LaTeef and Ava Shomaker, McLean High School Co-Captains Ann Liu and Margaret Duvall led dozens of students who devoted hundreds of hours to make the Relay a success.

The First Lap of the all night Relay belonged to honored cancer survivor guests, who were joined on the track by Langley and McLean administrators and guest dignitaries.

Showing their enthusiasm and dedication to the cause, Fairfax County School Board Member At Large Ryan McElveen and Chairman Ilryong Moon raced to the finish of the first lap in the Langley and McLean High Schools Relay for Life fight against cancer fundraiser.

From left, Langley Relay for Life Sponsorship Chair Will Pfadenhauer, Publicity Chair Clare DaBaldo, Co-Captain Harris LaTeef and Co-Captain Ava Shomaker take a moment to smile for the camera before heading back to ensure that everything is going according to plan.)

White paper “Luminaria” bags lit by candles spelling out the words “Hope” and “Cure” were set up on the bleachers during the Relay for Life fundraiser. Dozens of people purchased bags to honor loved ones lost to cancer, cancer survivors, and family and friends still engaged in the fight with cancer.

The students of Langley High School (LHS) and McLean High School (MHS) most often see each other as arch rivals, particularly when vying for local supremacy on sports fields and courts, so the fact that the two schools joined forces and pulled off a joint effort in the American Cancer Society-sponsored Relay for Life fundraiser on Saturday, April 26, made the event much more special. Langley Co-Captains Harris LaTeef and Ava Shomaker started planning the 2014 Relay immediately after the 2013 happening, which was Langley’s first time to participate, and which won them Best Rookie Relay in the region while raising $57,000. Knowing that upcoming renovations to Langley would probably mean that a 2015 event would have to be on borrowed ground from MHS, joining forces for this year’s Relay just made sense. McLean Co-Captains Margaret Duvall and Ann Liu, both seniors, rallied their troops and the combined energies and efforts of the two schools was a sight to behold at Langley’s track and field stadium when the opening ceremonies began just after 6 p.m.

“Cancer doesn’t care if you go to Langley or McLean, or if you’re associated with one or the other,” said LaTeef. “It really is something special that these two schools could do this together,” added Will Pfadenhauer, the Sponsorship Chair for the Langley group. “This really turned out to be a community thing.”

Another factor that made this fundraiser unique is that it was completely student organized. “We are one of only two student-run events in the state, and the only one in the county,” reported Langley Publicity Chair Clare DaBaldo. Considering that some 5,2000 communities in 20 countries hold Relay For Life events each year, no wonder the Langley and McLean students see their all-student organization as something to be proud of. “But we couldn’t have done it without a lot of help,” said Co-Captain Shomaker. Both schools were quick to acknowledge the support of a large cast of students, teachers, administrators, staff, friends and family, thanking them during the opening remarks.

SEVERAL SPEAKERS took to the podium to welcome the crowd of more than 600. Fairfax County Public Schools (FCPS) Board Chairman Ilryong Moon praised the efforts of all, and added his words of honor to the guest cancer survivors who had been treated to a lunch earlier in the school cafeteria. Moon said that he had not planned to speak, but seeing the “incredible spirit and cooperation between these schools” and having been a cancer survivor himself, he felt compelled to add his personal congratulations and express his admiration. FCPS Dranesville District School Board member Jane Strauss, who was greeted with wild applause, also addressed the crowd. She, too, has been touched by cancer, having lost her husband to the disease six years ago. She particularly praised the “millennial generation.” “You will be the ones who go forth and ‘Finish the Fight,’” she said. Langley Principal Matt Ragone spoke of his family’s own loss of his young brother Tim to cancer, as he and Mclean Principal Ellen Reilly added their congratulations and thanks before it was time to cut the ribbon and get the relay under way.

The various dignitaries and the cancer survivor honorees took the first lap around the stadium. LaTeef and Shomaker then announced each team in the order of the amount of funds each raised and set them on the track. In keeping with their mantra, “Cancer Never Sleeps So Neither Will We” – at least during the Relay – someone will be walking around the track at all times from the first lap until the following morning at 6 a.m. Contests, games, music, and special “theme” laps will help keep the participants and the support staff awake and going strong throughout the night. Publicity Chair DaBaldo described the “Mz. Relay” contest in which male students volunteered to don dresses “and maybe heels” to walk a lap. A “Luminaria Lap” was also scheduled for 9 p.m. White paper bags, lit by candles and labeled in honor of lost loved ones, current cancer fighters or survivors were purchased by the dozens. The bags were set up on the bleachers to spell out the words “Hope” and “Cure” during this special lap. “It’s very emotional. Very moving,” noted LaTeef, who in addition to co-captaining the Langley Relay for Life will be joining the Fairfax County School Board as its Student Representative for the 2014-2015 term.

IF THE GOAL of the student organizers of the 2014 Langley/McLean Relay for Life was to raise funds to fight cancer, and to prove that working together really does make a difference, then the results of their efforts proved their point. They hoped for 500 participants. They got more than 600. They hoped for at least 50 teams. They got 52. They were looking to raise $70k. As the first relay lap was completed, LaTeef announced that they had just passed $90k. On Sunday morning that figured jumped to more than $102k.

“You just know you can do something. Make a difference in your own community and all around the world if you just get together and try,” was LHS Co-Captain Shomaker’s comment.