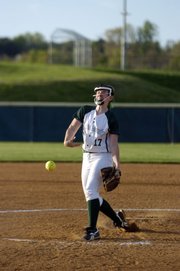 In a battle of the top two teams in Conference 7, South County pitcher Rebecca Martin shut out the Lake Braddock softball team for 12 innings, only to have Bruins hurler Ashley Flesch answer every step of the way.

Frame after frame, Martin and Flesch matched one another with goose eggs on the scoreboard during a memorable pitching duel.

While Martin’s right arm had kept the Stallions alive against the undefeated Bruins, it was her bat that would put an end to the Thursday night marathon.

With two outs and a runner on first in the bottom of the 13th, Martin doubled to deep left, driving in the game’s only run as the Stallions defeated the Bruins 1-0 at South County High School.

Martin’s walk-off knock was South County’s only hit of the night against Flesch, who suffered the tough-luck loss. Flesch, a senior right-hander, walked one, hit two batters and struck out 19 in 12 2/3 innings prior to surrendering Martin’s game winner. Flesch threw 154 pitches, including 112 for strikes, and tossed a first-pitch strike to 27 of 42 batters faced.

MARTIN, A SENIOR RIGHT-HANDER, received a no decision, allowing eight hits in 12-plus shutout innings. She walked five, hit one batter and struck out 13. She threw 183 pitches, 119 for strikes. She threw a first-pitch strike to 34 of 52 batters faced.

“Ashley is such a great pitcher,” Martin said. “It’s always really fun whenever we play Lake Braddock because it’s always such a close game. You have to really focus hard and not make any mistakes. If you miss one pitch or throw it right down the middle, that’s going to give up the game, so you have to really keep focused for the entire game.”

“[I] just felt like we needed to change it up there [after] the triple,” Dillow said, “and just show them something a little different because they had been up so many times against Rebecca tonight.”

“It’s always really fun whenever we play Lake Braddock because it’s always such a close game. You have to really focus hard and not make any mistakes. If you miss one pitch or throw it right down the middle, that’s going to give up the game, so you have to really keep focused for the entire game.”

The move paid off as Wilkinson struck out right fielder Emma Rakaowski, retired shortstop Amanda Patterson on a comebacker and struck out third baseman and leadoff batter Patty Maye Ohanian to leave Newman stranded at third.

“She had a phenomenal finish,” Martin said.

While Wilkinson earned the win with a clutch relief appearance, Martin did the heavy lifting for South County in the pitcher’s circle. It wasn’t the first time in her career she was locked in scoreless, extra-innings duel. As a freshman, Martin threw a 12-inning, one-hit shutout against West Potomac in the 2011 Patriot District championship game. On that night, she struck out 17 and needed 178 pitches to out-duel then-Wolverine senior Morgan Maniglia as the Stallions won 2-0 at West Springfield High School.

Martin said the experience as a freshman helped with her mental approach.

“[Martin] just competed her butt off,” Dillow said. “She pitched a great game. [The Bruins are] one of the best teams in the state, I think, easily, and she held them to no runs through 12-plus. … The ball is always moving. She doesn’t throw much of anything straight. … She just keeps people off balance, she hits her spots and she just competes.”

Martin pitched well, but the Bruins had their opportunities.

LAKE BRADDOCK left 16 runners on base, including seven in scoring position. The Bruins loaded the bases with one out in the 10th, but Martin got out of the jam with a strikeout and a fly out to left field.

Lake Braddock pitcher Ashley Flesch struck out 19 and surrendered just one hit in 12 2/3 innings against South County on April 24.

“We lost it because we stranded those runners,” Lake Braddock head coach George Rumore said. “We definitely stranded more runners than they did. Then we had the girls at third base with less than two outs and we just couldn’t get them in, so there’s your ball game right there.”

While Lake Braddock had several chances to score, South County had just three batters reach base against Flesch prior to Martin’s walk-off hit. Shortstop Jade Williams was hit by pitches in the fourth and 13th innings, and came around to score the winning run. Right fielder Carley Kastner drew a leadoff walk in the seventh. Kastner put a charge into a ball in the 12th inning, but flew out to deep left, just a few feet shy of the fence (220 feet).

“[Flesch] was great,” Rumore said. “Rebecca Martin was great, too. Both pitchers did an outstanding job, there was no question.”

Jones hit the ball hard several times during the contest but fell victim to solid South County defense. With runners on first and second and two outs in the sixth, Jones lined a 0-2 pitch to the left side, but Stallions shortstop Williams snagged the line drive to keep the game scoreless. Jones flew out to deep left in the eighth inning and, with a runner on first and one out in the 12th, Jones again hit the ball hard to the left side of the infield, but South County third baseman Caitlin Maglich made a nice pick and threw to second base for a force out.

“We’re fine,” Rumore said. “We’ve each got to play each other three times, probably, so we’re fine. Nobody expects to go undefeated. It takes a huge effort to do that.”

The Stallions and Bruins were scheduled for a rematch on April 29 at Lake Braddock Secondary School, but the game was postponed due to inclement weather.

“They’re a great team and it’s so much fun playing against them,” Dillow said, “because we always have epic games.”