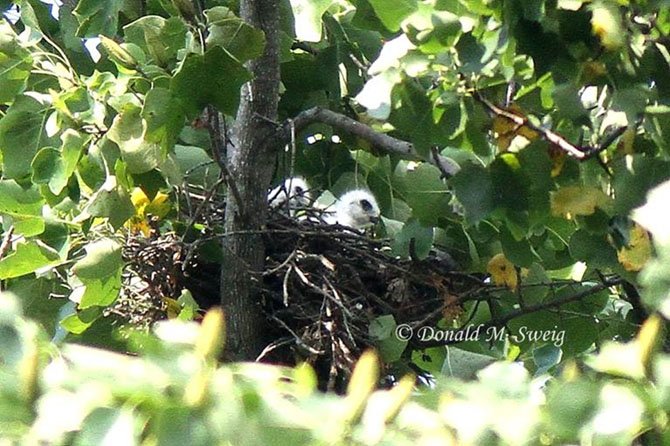 There are some quite unusual birds nesting in Burke this year.

A pair of Mississippi Kites have built a nest and are currently feeding two young chicks in a large tree on some private land near Jackson Street in Burke, attracting birders from around the area.

Mississippi Kites (Ictina mississippiensis) are a common nesting raptor in the Carolinas south down into Florida and then west as far as East Texas and then up into Kansas and Southern Colorado. The adults are generally light gray with a lighter head and sometimes a darker tail, and long pointed wings. When hunting and chasing after dragonflies and cicadas, their favorite prey, they can transform themselves into miraculous aerial acrobats, swooping and diving through the air. Until about 10 years ago Mississippi kites had never been known to nest in Fairfax County, and they are still rare here.

This is the second year that the kites have nested in this area of Burke, a couple of very special summertime residents for sure. By the end of August they will have left to return to their winter home in South America.