Art mural by Keith Naquin on view at Station Street in Herndon. 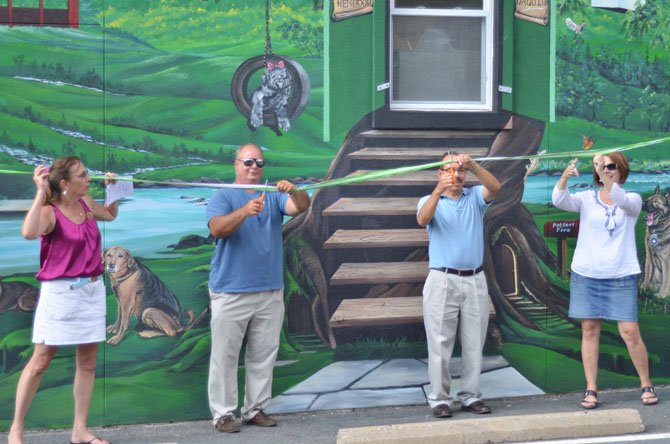 Associates and friends of the Council for the Arts of Herndon (CAH) assembled to celebrate the dedication of a mural at the Dominion Animal Hospital at 795 Station Street in Herndon. The mural, painted by former Herndon High School art teacher Keith Naquin, is a 95-foot long piece of art, and was commissioned by the CAH. Almost 100 persons attended the outdoor dedication ceremony on Sunday, Aug. 17. 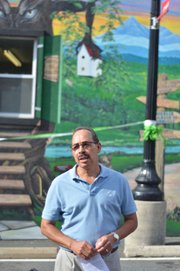 Owner of Dominion Animal Hospital in Herndon, Dr. James Boone, says a few words at the dedication ceremony held on Aug. 17 for the new mural completed by Keith Naquin.

“The Council for the Arts of Herndon really outdid themselves this time with their latest public art project,” stated Mercia Hobson, a resident of Herndon and Vice President of the Herndon Foundation for the Cultural Arts. “It’s bright, invigorating and engaging. How can you not smile at the fairy-tale like scene Keith created for the Town of Herndon?” There are 23 animals depicted on the mural, which includes a variety of cats and dogs.

The purpose of the mural was to produce a tribute to the furry friends of the community as part of a campaign to highlight the town's support for the arts. The mural is on a wall adjacent to a town parking lot used year round as well as daily parking for local shops, offices and restaurants. This is the town’s 4th large scale mural. Naquin painted two other outdoors murals in downtown Herndon. One mural is on a wall of the Ice House Café building, and was completed in the fall of 2012. “It is a great accomplishment and a great asset for the town of Herndon,” said David Segal, a resident of Herndon and member of the CAH.

The mural is directly across the street from the Town of Herndon Municipal Center with a view for the Municipal Center’s visitors. “The murals in downtown Herndon add to the ongoing development of our downtown,” said Hobson. “Art is the place maker that makes all the difference.” Karen Shoemaker, a CAH board member, helped raise funds and campaign for the mural project. The mural dedication ceremony followed one of the most successful CAH fundraisers ever, with $14,000 raised for scholarships.

Former Herndon mayor Mike O’Reilly, president of the CAH, opened the dedication event. “The latest mural sponsored by the Herndon Council for the Arts brought the entire community together to celebrate Herndon, Herndon families and Herndon pets,” stated O’Reilly. “We partnered with businesses and pet owners to recognize the Dominion Animal Hospital and the many animals that its staff cares for and has cared for over the years. This new mural displays the Herndon that we all know and love, a vibrant, caring community.”

Current Mayor Lisa Merkel was welcomed to give some remarks, as was the owner of Dominion Animal Hospital, Dr. James Boone. “We have heard so many compliments about Keith’s work… God has given him a gift,” said Boone. Reverend Laverne Gill, Treasurer for the CAH, shared some history on the founder of the Dominion Animal Hospital, Dr. Kermit O. Cockrell. In the mural, there is a red barn with name “Doc Cockrell” painted on it. To finance the mural project, for a limited time the CAH opened sponsorship opportunities. Herndon organizations including the Herndon Woman’s Club made donations to have names placed on passageways on the landscape.

“We have been overwhelmed at the support this mural has received from the residents of the town,” said Signe Friedrichs, executive director of CAH. “The painting of the mural was like a piece of performance art, passing children and adults took every opportunity to speak with the artist as he worked. It was really a pleasure to see this mural become part of the conversation about art, which is what public art is meant to inspire.” After a layer of stucco was applied to the wall, Keith Naquin painted for almost three months. Naquin thanked Sherwin Williams for donating the paint used for this project, and thanked the audience and town of Herndon. “I am hoping everybody is pleased with the result,” said Naquin.

“I love how vibrant the mural is and how much it means to the community to have their cherished pets represented on it,” said Herndon town council member Grace H. Wolf. “This mural was the first mural idea we thought of when we created the outdoor art program several years ago. Myself and then Executive Director Vicky Dorman approached the Animal Hospital to see if they were interested and they were supportive from day one.” Work on the mural was delayed until 2014 when sufficient funds were available to cover the expense of the project. “I am so pleased we selected mural artist extraordinaire Keith Naquin to paint this,” said Wolf. The CAH is a nonprofit that creates opportunities for local artists to showcase their talents and provides local arts programming to businesses and the public sector in the vicinity of the Town of Herndon. For more information about the Council for the Arts of Herndon, visit herndonarts.org.