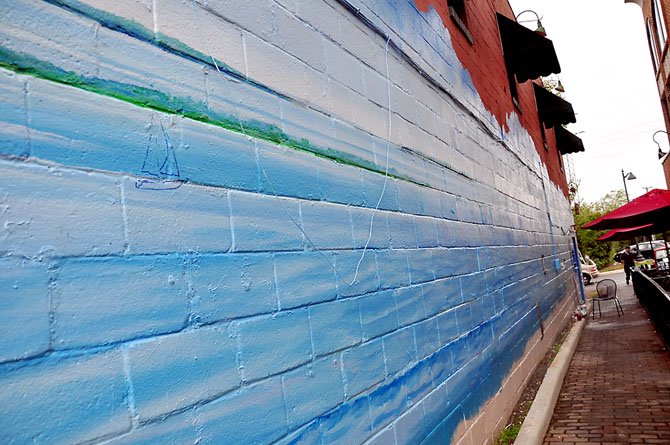 The mural on the side of the Ice House Café, which is being painted by artist Keith Naquin, is expected to be finished within the next four to six weeks Photo by Alex McVeigh.

Herndon — Downtown Herndon has been a bit more colorful in recent months, and artist Keith Naquin is a major reason why. Over the summer, the retired Herndon High School teacher turned the gray wall behind the NAPA Auto Parts building into a scenic, pastoral mural. Now he’s moved onto his second project, transforming the red brick wall of the Ice House Café. 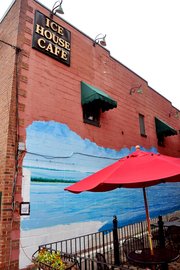 The wall of the Ice House Café in downtown Herndon, which is the site of the latest mural painted by Keith Naquin and commissioned by the Council for the Arts of Herndon.

"The owners said they wanted something like a Chesapeake Bay scene, since the Ice House Café is an Oyster Bar, so it fits," Naquin said. "The hardest part is working in an alley, it’s hard to step back and get a perspective of everything."

This project, like Naquin’s last one, is sponsored by the Council for the Arts of Herndon. The wall of the café is about 66 feet long, which is almost 30 feet shorter than the NAPA building.

The mural will feature the full spectrum of nautical uses, with the "work" section starting at the building’s rear with the back door being transformed into a fishing shack.

From there, the mural will depict crab and oyster boats before segueing into more recreational uses of the water, such as families fishing, boating and at a coastal tiki bar.

"I did some research, visited the Chesapeake area and took some photos of boats and the surroundings for ideas," Naquin said. "This wall was a little harder to prep than the other one, it took about a week to do two coats of primer and fill in a few of the cracks. But when it’s done, it will turn a standard brick wall into a scene that hopefully adds some depth."

Patrons of O’Sullivan, which is next to the Ice House Café, have already been enjoying the view. The bar has several large windows which face the mural, and patrons using the patio are right there.

"I can’t wait for this mural to be finished, it certainly beats staring at a brick wall," said Joseph Barnett of Herndon. "Just the fact that there are some light, sky-like colors, the blues and greens, really change the whole impression of the alley. Even when you’re not focusing on it, having that scene, of boats and water, in your peripheral vision will change the atmosphere enormously."

Only part of the mural is visible to drivers going west on Elden Street, but it has been enough to make a few drivers pull over and take a look at what the sudden change is.

"I was just headed to the store when I noticed the wall, that had always sort of blended in with the other nearby brick buildings, was super colorful, and since it was a Sunday, I could pull over into one of the parking spots and take a look," said Jean Jordan of Reston. "I think it’s a great addition, and once the whole scene is painted in, it will look great. Kudos to the arts council for finding a way to make downtown more of a signature destination."

Naquin is currently in his second week of work on the mural, and he hopes to be finished in about a month.