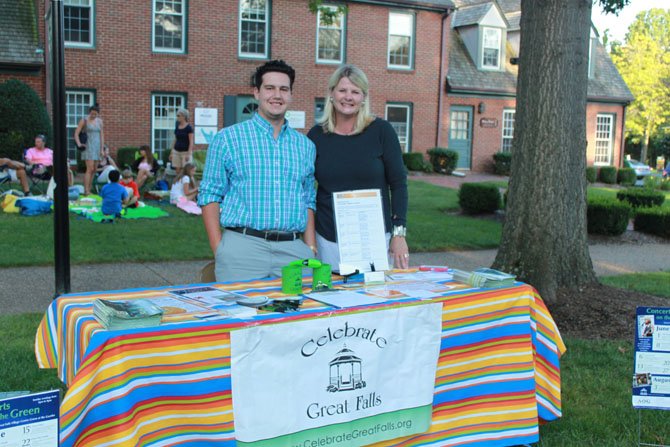 Celebrate Great Falls intern Mike Stys and director Erin Lobato at the information booth during the Concerts on the Green Sunday.

In an effort to drum up volunteers, Celebrate Great Falls is making some changes soon.

A more membership driven service and a new event under its wing - the Turner Farm Independence Day fireworks - it hopes to drive the number of people willing to donate their time to make CGF’s events happen.

“We have seven major community events annually, and we’re asking for them to operate just one so they can enjoy the other six,” said CGF board member Mike Kearney.

He said that in the future, members can only join if they agree to sign up to volunteer for at least one event - even if just for a few hours.

“We’re not looking for event chair people,” he said. “We’re looking for people who want to help.”

THE FOUNDATION director, Erin Lobato, said there are 50 people in the community who get called whenever a position needs to be filled for an event. However, she said more - up to 300 - would be preferable so no one gets overworked.

She said the foundation is a great way to learn more about the community and make new friends.

“We moved here in 2012, and I’ve been struck by how quickly all of us felt we were a part of a community,” she said.

She was invited to a coffee social and volunteered for Spooktacular. Through the foundation, she made friends she regularly socializes with.

“While you’re giving back, you can meet someone you can really hit it off with,” said Lobato. “In the 21st century, to maintain that sense of community, it’s nice to be able to slow down and do something like that.”

Great Falls is unique in that it is often touted as a small town just outside of the nation’s capital. According to George Mason University Senior Research Associate at the Center for Regional Analysis David Versel, that may be part of the problem with CGF’s volunteer shortage.

“In Great Falls, I would venture to say that if you like there, you have to go elsewhere to earn your paycheck,” he said. “There are dozens of places in D.C. that have a small town feel. You have people who live in proximity of the business center - biking or walking distance - who are there every day of the week.”

He said the only surefire way of a bedroom community to get the residents to become community minded is to give them an incentive.

“People are only going to volunteer if they feel it is worth their while,” he said.

To create that small-town feeling, Lobato said the foundation is hoping to have five or six potluck dinners at local businesses so volunteers can meet their neighbors and make new friends.

She also said that when the Independence Day fireworks did not go off at Turner Farm this year, many residents learned it had nothing to do with a lack of funds - it was because the organization that was planning it did not have enough volunteers. Next year, the fireworks will be under CGF’s wing to organize.

“The Fourth of July is a cautionary tale of what happens when people can’t donate their time,” said Lobato.

The group’s current volunteers are looking forward to meeting people interested in joining the group.

“It’s the best kept secret,” said Barbara Morehouse. “If you only knew how much fun it is to go to a meeting at The Old Brogue and have a beer or glass of wine. And we get so much work done.”

She said interested community members might worry about the group being cliquey or exclusive, but they are always looking for new people to help out.

“The parade was my first volunteer experience with them,” she said. “I was raised here so I got to go to a lot of the events Celebrate Great Falls put on. “

She agreed with Lobato’s statement that many residents just expect the events to happen and do not know how much volunteer hours each of the members have to put into it because of the small numbers.

For more information about Celebrate Great Falls or to sign up to volunteer, visit http://celebrategreatfalls.org.