Warriors beat Woodbridge on first day of Under the Lights tournament. 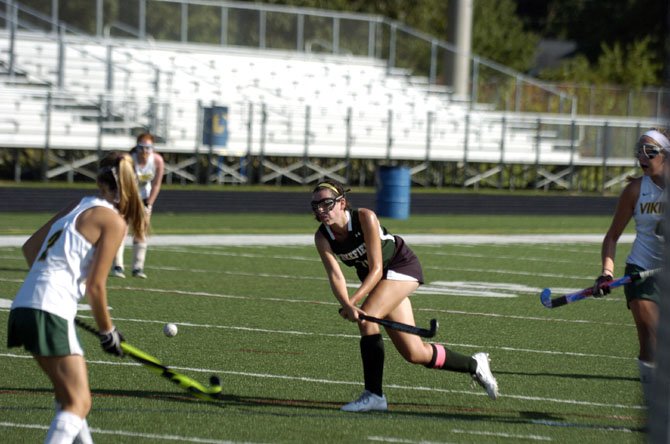 Georgia Allin is a senior captain for the Wakefield field hockey team. Photo by Craig Sterbutzel.

Senior Alexis Campbell, center, and junior Bryana Ortiz (15) each scored a goal for Wakefield during a 2-1 win over Woodbridge on Monday.

Georgia Allin is well-versed in the struggles of the Wakefield field hockey program.

As a freshman on the varsity in 2011, Allin was part of a Warriors team that won just twice. The following year, Wakefield failed to win a game. As a junior in 2012, the Warriors again won a pair of games.

On Monday, Aug. 25, the 2014 season started with more of the same. Despite having been competitive in a pair of preseason scrimmages, including a win against Falls Church, Wakefield’s first game in the Under the Lights tournament at Lee High School ended with a 6-0 loss to the host Lancers.

Allin, a senior captain, said the loss brought the team down. Luckily for the Warriors, they had a chance to do something about it.

A few hours later, Wakefield defeated Woodbridge, 2-1. Bryana Ortiz and Alexis Campbell each scored a goal for the Warriors. Seniors Kiana Cauley and Allin each had an assist.

“The first game was a mess, and the second game was just so much better,” Allin said. “… It’s such a confidence boost. That first game was so rough and I feel like it really brought everybody down, but having this win … all the girls are happy and smiling, it makes all the really hard practices worth it.”

On Tuesday, Wakefield lost to Battlefield, 6-0, and defeated Hylton, 4-0.

With two wins under their belts, the Warriors are hoping for bigger and better things this season. They know it won’t be easy, though. Many of the girls in the Wakefield program arrive at the high school level with little or no field hockey experience. From there, it’s all about hard work to try and catch up.

“This is my last year here and I’ve watched us go from wining [two games] a season and then winning no games. The expectation now is that we really should be winning.”

“It’s really hard when you’re going up against [girls that] are ninth graders,” Allin said, “but they’ve played for more years than you have as a senior.”

Luci Grause is in her third season as head coach of the Wakefield field hockey program.

While the Warriors have traveled a bumpy road, third-year head coach Luci Grause has helped the program grow. In 2012, Wakefield did not have JV field hockey program, Grause said. This year, enough girls came out for field hockey that Grause had to make cuts.

“These girls are so amazing,” Grause said. “I just can’t say enough about them.”

The feeling is mutual.

“She’s amazing,” Allin said of her head coach. “If girls can’t afford cleats, she gets them for us. She’s so great about organizing things. She organized parents to make lunches for us for the tournament. She’s really hard on us. If we mess up, we know it.”

“This is my last year here and I’ve watched us go from wining [two games] a season and then winning no games,” Allin said. “The expectation now is that we really should be winning.”