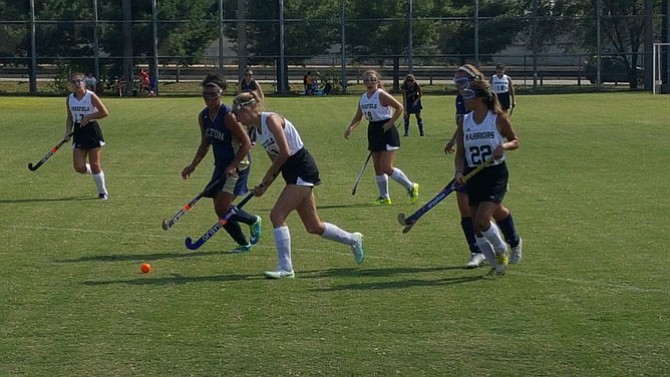 The Wakefield field hockey team opened the season with a 6-0 victory over Hylton on Aug. 24. Photo by Jon Roetman.

It took just one game for the Warriors to experience a new — and exciting — result.

Wakefield opened the 2015 season with a 6-0, mercy-rule victory over Hylton on Monday at the Under the Lights tournament at Lee High School. Senior Bryana Ortiz led the Warriors with four goals, and senior Ingrid Jacobsen and junior Inge Nealis each had one.

Wins have been scarce for Wakefield in recent seasons. Last year, the Warriors finished 4-12 and actually doubled their win total from 2013. Wakefield failed to win a game in 2012, and won just two in 2011.

The Warriors did more than win their season opener Monday. They produced a morale-boosting blowout.

“The feeling of winning is sort of different for us,” Jacobsen said. “It’s a really good feeling to come in and be someone that people have to worry about.”

What changed for the Warriors?

“This year, we really changed the program around in terms of teaching them a different style of field hockey,” said Wisniewski, who was an assistant with the team last season. “[We’re] introducing them to just what field hockey actually looks like and they’ve not really seen that in their prior history.”

Wisniewski said he wanted the Warriors to stop playing “huddle-ball hockey” and focus more on passing and spacing. Wakefield spent ample time working on drills in the preseason and it paid off with a convincing first win.

“This,” Wisniewski said about Wakefield’s 6-0 win over Hylton, “for [the players] cemented the fact that what I’m teaching them works.”

Along with the lopsided final score, Jacobsen had an individual experience in the opener that helped prove the value of what the Warriors have been practicing.

Ortiz, whose four goals were a career high, praised Wisniewski.

“I think he’s a very good coach,” she said. “He’s really changed the team. He’s made us a lot better and he’s really fun to be around.”

It turned out that the Warriors were just getting started. In Wakefield’s second game of the day, the Warriors produced another lopsided win, mercy-ruling Gar-Field, 6-0.

Wisniewski said senior midfielder Amelia Wilt “could play Division I if she wants to.”

On Tuesday, during the second day of the tournament, Wakefield defeated Hayfield 2-1 and lost to South Lakes 2-0. Ortiz and Schneider scored against Hayfield. Ortiz finished the tournament with six goals.

“It’s incredible,” Wilt said after Wakefield beat Hylton. “My friend Julia [Rogers] and I are two of the seniors who have been on varsity all four years, and our freshman year we were losing games 8-0, sometimes. To go from that to this, it feels amazing. Some of the newer girls are like, ‘Oh yeah, it’s exciting,’ but to us it means so much.”