Ushering in Holiday Season in Centreville 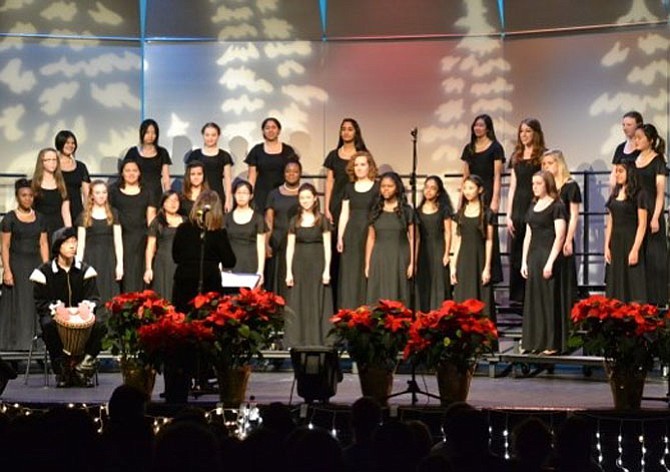 Centreville High’s Choral Department will present its annual Winter Concert on Thursday, Dec. 18, at 7:30 p.m. in the school theater. The concert is free to all, and refreshments will be served afterward.

“Every year my students amaze and delight me and their audiences with their talent and the passion they bring to the music,” said Choir Director Lynne Babcock. “This year is no different. I’m so looking forward to this concert, and I hope the whole community will turn out to support these wonderful singers. This concert is a joyful, entertaining way to usher in the holiday season.”

All five of Centreville’s choirs will perform. The program will begin with “Bright Mornin’ Star,” an Appalachian folk tune. All the choirs will sing it together, followed by “Amavolovolo,” an African folk song.

Next, Women’s Ensemble will sing “El Cant de Ocels,” a song in the Catalonian dialect, as well as “Lazy John,” an Appalachian folk song, and “This is the Day,” a gospel tune. Men’s Ensemble will perform “Keep Your Hand on that Plow,” a spiritual, and “Bar’bry Ann,” an Irish folk tune.

Concert Choir will sing the bluegrass tune, “Down to the River to Pray,” plus the Spanish folk song, “Oy Es Dia del Placer,” and the Australian aboriginal “Tunggare.”

Rounding out the first half of the program will be the Madrigal Ensemble, singing two Renaissance Madrigals: “Pase el Agoa” and “Ecco Mormorar L’onde,” followed by a contemporary arrangement of “Greensleeves.”

“Madrigal Ensemble is a highly select chamber choir,” said Babcock. “The students sing music from the Renaissance for most of the school year. They also carol in and around the community during the Christmas season. Each year at the Winter Concert, Madrigal Ensemble can be seen and heard caroling outside the theater before the concert starts, to entertain the audience members as they come in to the theater.”

Opening the second half of the concert will be Bella Voce, the advanced women’s choir, singing the Appalachian folk tune,“Bring Me Little Water, Silvey,” the Sephardic song “Take a Step,” and “J’ai vu le loup,” a French folk song. The finale of its set is “In My Dreams,” which was written and recorded by the British military women’s choir, to honor their loved ones serving Iraq and Afganistan. The male soloist, singing a duet with the choir, will be Joshua Ewalt.

Then Symphonic Choir will perform its traditional version of “Carol of the Bells,” followed by “In the Bleak Midwinter,” arranged and conducted by Centreville Choral alumnus Emily Dohse. Its next three songs will be “Northern Lights,” a beautiful tone poem, “Old Horatius Had a Farm,” a satirical paroady, and “Hold On,” an African-American spiritual.

Rounding out its set will be an arrangement of “If I Had a Hammer” which the group sang in October with the National Symphony Orchestra at The Kennedy Center for “A Concert against Hate.” The soloist and guitarist on this piece will be Seth Kim.

The concert’s finale will consist of three numbers. The first, the African folk song “Tshosholoza,” will be performed by all the men in the Choir Department; Ewalt will again solo. The bluegrass tune “Will the Circle Be Unbroken” will follow.

“Then the evening will culminate with ‘An Irish Blessing,’ the traditional finale for every CVHS Winter Choral Concert,” said Babcock. “Each year, choral alumni in the audience are invited to come on stage and join in the singing of this lovely piece.”

Instrumentalists for the concert will include Mike Maher on piano, fiddle and banjo; Karsten Kim and Francisca Idio on percussion; and Seth Kim and Bree Verrill on guitar.