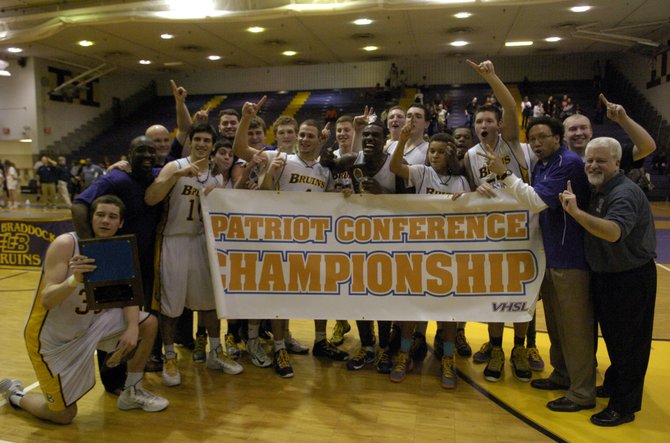 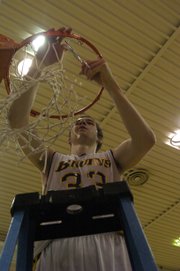 With the score tied and less than 3 minutes remaining in Friday’s Conference 7 championship game at Woodson, Lake Braddock senior Will Gregorits twice stepped to the free-throw line with a chance to give the Bruins a lead.

With 2:18 remaining, Gregorits missed the front end of a one-and-one. Twelve seconds later, he missed a pair.

“I choked down the end,” Gregorits said. “… I missed those [three] free throws, but my team had my back.”

Other Bruins made plays down the stretch, giving Gregorits a chance at redemption. With the Bruins down one and 13.5 seconds remaining, Lake Braddock went with the play “one down,” which gave Gregorits a chance to attack the basket or dish to a perimeter shooter.

Gregorits drove to the rim and scored with 4 seconds remaining and the Lake Braddock boys’ basketball team held on to beat Woodson 62-61 at Lake Braddock Secondary School. It was the Bruins’ second consecutive conference/district championship, and the first time Lake Braddock had repeated since winning three in a row in 1986-87-88.

“[Head coach Brian Metress] said go score it, because I know you will,” Gregorits said. “It just happened to work and I’m so happy.”

Gregorits’ bucket put Lake Braddock on the winning side of a wild, back-and-forth finish.

Trailing by one, Woodson’s Eric Bowles knocked down a pair of free throws to give the Cavaliers a 59-58 lead with 1 minute remaining. At the other end, A.J. Alexander made a pair from the foul line to put Lake Braddock back on top, 60-59, with 42.2 seconds left. With 13.3 remaining, Woodson’s Andy Stynchula made both attempts from the charity stripe, putting the Cavaliers back in front, 61-60.

“It’s 10-times better. It’s the second time in a row, it’s expected. It would have been a big upset if we would have lost --- [to] us, at least. I don’t know about everyone else around the district.”

That’s when Gregorits answered, giving the Lake Braddock a 62-61 advantage. After a Woodson timeout, Bowles missed a runner at the buzzer.

“It’s 10-times better,” Alexander said when comparing Friday’s win with last year’s district title. “It’s the second time in a row, it’s expected. It would have been a big upset if we would have lost --- [to] us, at least. I don’t know about everyone else around the district.”

Woodson point guard Eric Bowles goes up for a shot against Lake Braddock on Friday night during the Conference 7 championship game.

Lake Braddock improved to 3-0 against Woodson this season with the three victories coming by a combined eight points. The Bruins entered the tournament as the No. 1 seed and the Cavaliers No. 2. Last year, Lake Braddock upset top-seeded Woodson in the district semifinals before beating South County in the championship game. The Bruins went on to lose in the region quarterfinals, while the Cavaliers won the Northern Region title and reached the state semifinals.

“For us … I thought maybe this year was a little bit more climatic because it was the 1 and 2 playing each other,” Metress said. “Last year, we played South County, who was a very good team, but … in basketball, it’s Lake Braddock and Woodson.”