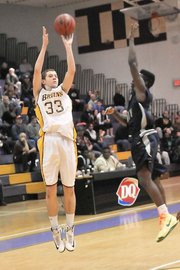 The following evening, when Lake Braddock trailed late in the district final, the Bruins had enough gas left in the tank to overcome a fourth-quarter deficit and capture their first championship in more than a decade.

Lake Braddock won its first Patriot District title since 2002 by defeating South County 50-40 on Feb. 15 at Lake Braddock Secondary School. The fourth-seed Bruins held a four-point advantage entering the fourth quarter, but the seventh-seed Stallions took the lead a minute later after a 3-pointer and a layup by Justin Williams. The South County senior scored again with 3:05 remaining in the contest, giving the Stallions a 37-35 lead, but Lake Braddock closed the game on a 15-3 run to secure the title.

“We knew they were going to come in there, give us a run for our money,” Lake Braddock sophomore A.J. Alexander said, “but we just had to stay settled down, keep a cool head and we knew we were going to pull it out.”

Alexander and junior Will Gregorits led Lake Braddock, with each making a significant contribution in the paint. Gregorits finished with 21 points and six rebounds, and Alexander scored 16 points and grabbed eight boards.

“We don’t win if [Alexander] and Will don’t rebound like they did,” Lake Braddock head coach Brian Metress said. “That was our whole emphasis before the game: we said, championship if you rebound.”

Gregorits was named tournament MVP. According to stats from the Washington Post’s website, the junior forward scored 15 points against Lee in the quarterfinals and 19 against Woodson in the semis. He started early in the championship game, burying a 3-pointer from the left wing and making a layup to give the Bruins a 5-0 lead.

“We do a lot of things to try to get him the ball,” Metress said. “He’s sort of the wheel that everybody kind of rotates around. He’s crafty. He’s a 6-foot-5 left-handed kid that kind of plays unconventionally. We’ve always thought that lefties are always a hard cover, but he’s crafty, quick and he can finish around the basket and he can shoot.”

Gregorits credited Metress for putting players in the right spot at the right time.

“I think we have the best coach in the region,” Gregorits said. “He always designs a new play or something to get someone open and it happened to be my night.”

“It’s the best feeling in the world. I’ve never had a feeling like this. It’s probably the single-greatest event of my high school career so far. To be over 10 years without winning [a district title], we had to get it—we just had to.”

The Bruins led 18-11 at halftime and built a 13-point second-half lead, when a steal and layup by Sica gave Lake Braddock a 26-13 advantage. South County chipped away and took the lead in the fourth quarter, but couldn’t hold on.

“It’s the best feeling in the world,” Gregorits said. “I’ve never had a feeling like this. It’s probably the single-greatest event of my high school career so far. To be over 10 years without winning [a district title], we had to get it—we just had to.”

Alexander was named to the all-tournament team, along with Woodson’s Eric Bowles, T.C. Williams’ Landon Moss and South County’s Williams and Justin Hampton.

Williams led the Stallions with 16 points in the district final. Hampton, a first-team all-district selection, went scoreless in the first half, but finished with 10 points, including a trio of 3-pointers. The senior converted a four-point play in the third quarter, cutting South County’s deficit to 26-17.

The Stallions finished district runner-up for the second straight season.

Lake Braddock followed its district championship with a 60-43 victory against Stuart, the No. 4 seed from the National District, in the opening round of the Northern Region tournament on Feb. 18. The following night, Lake Braddock’s season came to an end with a 46-43 loss to Robinson, the Concorde District’s No. 2 seed, in the region quarterfinals.