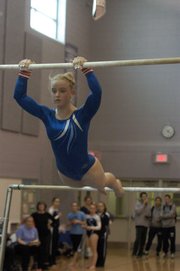 Members of the Yorktown gymnastics team sat and waited for the announcement of the team results following the Barbara Reinwald W-L Gymnastics Invitational on Jan. 25. As it turned out, the Patriots finished less than three one-hundredths of a point behind W-L for first place.

There was one more announcement to be made, however, the results of which likely washed away any frustration felt by Yorktown gymnasts.

While the VHSL’s six-class realignment eliminated districts, members of the former National District decided to keep tradition alive by using the W-L Invitational as a de facto district championship meet.

“It means a lot to them, I think, because they’ve been so close this whole year,” Yorktown head coach Joanne Price said. “Other years, we’ve known [W-L has] been a clear winner, but this year [the Patriots have] always known that they could. I think it means a whole lot to them and a big boost to their self-confidence to actually do it.”

“We’ve had some good teams, but it’s been a little while since they’ve been collectively good like this. We’ve had a lot of bright spots, but this team’s had more depth than I’ve seen in a long time.”

“We’ve had some good teams, but it’s been a little while since they’ve been collectively good like this,” said Price, who has coached at Yorktown for more than a decade. “We’ve had a lot of bright spots, but this team’s had more depth than I’ve seen in a long time.” 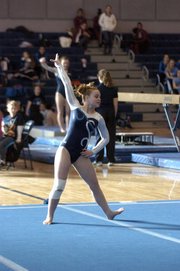 Washington-Lee freshman Sylvia Shea placed third in the all-around at the W-L Invitational on Jan. 25.

“The kids really wanted to win the invitational,” W-L head coach Joe D’Emidio said. “They worked real hard for it.”

“I think she is really coming along,” D’Emidio said. “Her transition from club gymnastics (Arlington Aerials) to high school gymnastics is coming along really fast. … She’s an outstanding club gymnast. High school is a little different. It’s more of a team type of an atmosphere. She did really well. … She’s getting better every meet. She’s getting more comfortable with high school gymnastics. As for a freshman, she’s becoming a star in the school.”

Annie Hatcher placed first on vault, earning a 9.625 for her Pike Tsuk.

“She nailed it tonight,” D’Emidio said. “It was a beautiful vault. With that type of vault, she’s a state contender.”

Yorktown and Washington-Lee, now members of Conference 6, will compete in the conference championship meet is at 6 p.m. on Feb. 3 at McLean High School.