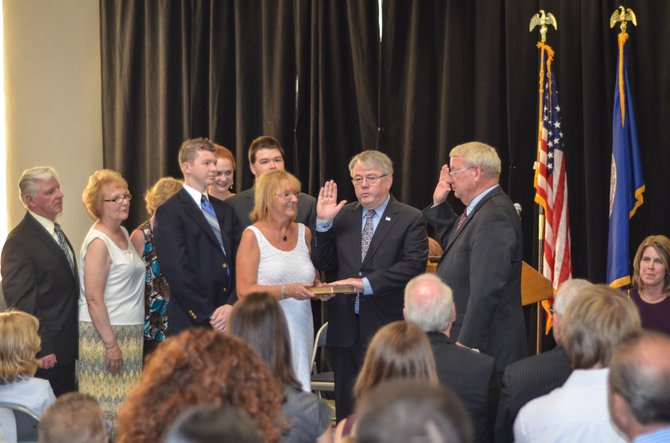 At a special ceremony held Sunday evening on June 29 at the Herndon Municipal Center, Town of Hendon Mayor Lisa C. Merkel and members of the 2014-2016 Herndon Town Council were sworn into office by the Honorable John T. Frey, clerk of the Circuit Court for Fairfax County. The Town of Herndon is the third largest town in the Commonwealth of Virginia and home to over 23,000 residents.

In addition to Merkel, members of the 2014-2016 Town Council are Jennifer K. Baker, David A. Kirby, Steven Lee Mitchell, Sheila A. Olem, Jasbinder Singh and Grace Han Wolf. Master of Ceremonies for the Sunday event was former Herndon Vice Mayor Darryl C. Smith, Sr. “It is great to see so many Herndonites and so many friends from around the county,” said Smith.

For the event former Herndon councilmember and President of the Herndon Foundation for the Cultural Arts Board of Directors Harlon Reece sang the Star Spangled Banner. Reverend Stephen Smith-Cobbs of Trinity Presbyterian Church led an invocation for the new council. “Keep them aware of who they are to serve as they serve the whole Town of Herndon,” said Rev. Smith-Cobbs.

CONGRESSMAN CONNOLLY was welcomed to say a few words. “I truly believe local government is one of the most noble forms of government,” said Connolly. “You live on the edge when you are on local government because of the level of accountability… Congratulations to the Town of Herndon for building such a special community.” After the oaths of office were performed, Supervisor John Foust introduced Mayor Lisa Merkel to the podium.

In her remarks, Merkel called Herndon “the gem of the Dulles Corridor, a walkable small town with a world view, a close-knit community that celebrates history and welcomes innovation.” Merkel pledged to remain focused on planning for Metrorail, development in Herndon’s downtown and enhancement of town services. “Your town council and I will continue to work hard to make certain that, when Phase 2 of the silver line opens, we are ready to capitalize on the tremendous potential it represents both culturally and economically for our town,” said Merkel.

“We have rezoned the town owned land, approved the downtown pattern book and architectural guidelines, and dirt is finally turning on the new Vine Haven project, signaling the start of a smart, planned re-development in our downtown,” said Merkel. “Our innovate metro plan will also allow Herndon to attract world-class business to marquee spaces along the toll road, increasing our commercial tax base while elevating our stature in the Dulles technology corridor and throughout the region.”

Merkel encouraged citizens to stay involved. “We’d love to see you at council meetings,” she said. “Call us, email us, find us on Twitter and Facebook, whatever works for you. Let us know what you think. Help us set the agenda for Herndon, now and into the future. Herndon’s future is bright and I look forward to seeing you there.”

“I am very much excited about the new council,” said Herndon resident and Executive Director of the Council for the Arts of Herndon Signe Friedrichs who attended the event. “I am glad to see Lisa complete the agenda for the Town,” said Town of Herndon resident Al Hobson. “She strikes a good balance between keeping a family friendly feel yet also welcoming new business ventures.” Also attending the ceremony was Herndon Police Chief Maggie A. DeBoard. “We look forward to working with the council and accomplishing great things,” said DeBoard.

MATTERS the Town Council may later address include developments with the Herndon Silver Line station and overcrowding in local public schools. In 2009, Herndon Elementary was number 21 on the district’s list of schools to be renovated, but by the following year, renovations were pushed back to 2021. The Herndon Station is part of Phase 2 that is expected to be complete in 2018, taking passengers to Reston Parkway, Herndon, Route 28, Dulles International Airport and Ashburn. Phase 1 of the Silver Line is expected to open on Saturday, July 26.

“I thought the event was wonderful,” said newly elected councilmember Steven Lee Mitchell. “I cannot express the gratitude I have for the Town and I look forward to working for them.” Merkel and the 2014-2016 Herndon Town Council will hold their first public hearing on Tuesday, July 8. The July 8 public hearing will consider amending the budgets of the General Fund, Water and Sewer Fund, Chestnut Grove Cemetery Fund, Golf Course Fund, and Downtown Parking Enterprise Fund. The meeting begins at 7 p.m. and is held in the chambers building at 765 Lynn Street. Agendas, minutes and streaming video of public hearings are available on the town’s website at www.herndon-va.gov.