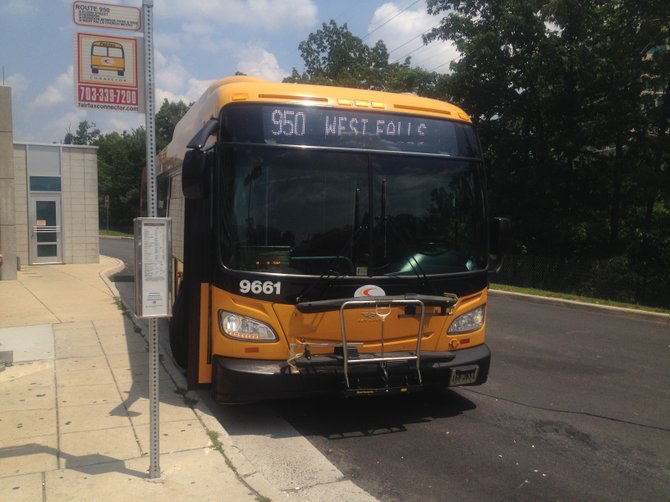 Five Fairfax Connector bus routes will be eliminated once the Silver Line opens. Route 950 will continue to serve Sunrise Valley Drive as it does today and connect to the Wiehle station after serving Herndon-Monroe daily. Photo by Ryan Dunn.

On July 26, the Silver Line, an extension of the Washington Metro rapid transit system will have its opening day. Silver Line riders will be able to board trains at the Wiehle Avenue station in Reston at noon that Saturday, according to an announcement by Metro General Manager Richard Sarles. Officials anticipated the Silver Line would open months earlier, but the decision was put off because of construction delays. Among the changes are elimination of old bus routes and the closure of the Sunset Hills Interim parking in Reston near the intersection of Sunset Hills Road and Town Center Parkway.

The $2.9 billion first phase of the Silver Line is 11.4 miles of track from Wiehle Avenue to East Falls Church, where the route meets the Orange Line. The Silver Line will have one station in Reston and four in Tysons Corner. Ultimately, the Silver Line will extend to Dulles International Airport and serve passengers traveling to Tysons from the Dulles Corridor to the west, and from Arlington and the District of Columbia to the east. 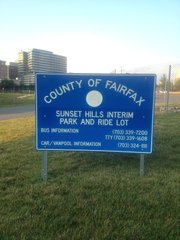 The Sunset Hills Interim parking in Reston near the intersection of Sunset Hills Road and Town Center Parkway will be closed beginning July 26.

Fairfax County transportation experts have been preparing the public for the new transportation routes bus services will offer at Silver Line stations.

Route 950 will continue to serve Sunrise Valley Drive as it does today and will connect to the Wiehle station after serving Herndon-Monroe daily. In addition, routes 924, 926, and 929 will connect Herndon-Monroe and Wiehle during weekday rush hours. For the year 2013, the most used five Fairfax Connector bus routes were Routes 401 and 402: Backlick - Gallows Road, Route 171 Richmond Highway, Route 950 Herndon – Reston, Route 980 Herndon-Monroe Park and Ride, and Route 310 Franconia Road - Rolling Valley.

Metrobus will provide service to and from the new McLean and Tysons Corner stations. The Fairfax Connector will handle the bulk of the bus service to all five new stations.

The second phase of the Silver Line will be 11 miles and six stations which will extend to Washington Dulles International Airport and eastern Loudoun County, at an estimated cost of $2.7 billion. It is intended to open in 2018. The second phase of the silver line will be built by Bethesda-based Clark Construction. The project from Falls Church to Loudoun County is being paid with this formula: 16.1 percent from Fairfax County, 4.8 percent from Loudoun County, 4.1 percent from the Metropolitan Washington Airports Authority (MWAA), and 75 percent from Dulles Toll Road revenue, less contributions from the Federal Transit Administration and the Commonwealth of Virginia. Fairfax County created two special tax districts to fund the bulk of their Silver Line contribution. Federal funding was provided to Phase 1 of this project but no federal funds are currently committed to Phase 2.

For more information on the Silver Line, visit silverlinemetro.com.