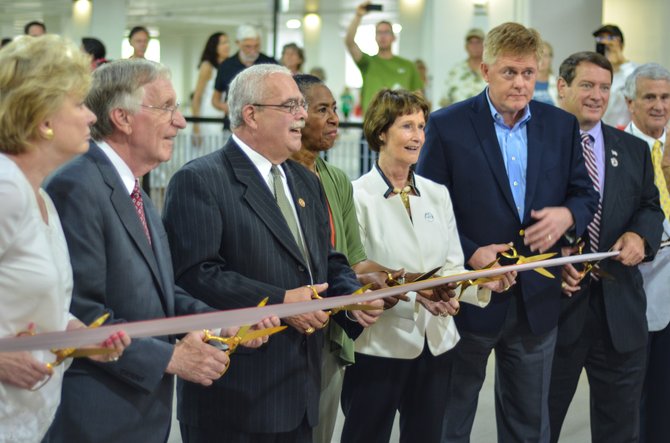 Comstock Partners built the garage, paying 23 percent of the $90 million price tag. The company picked up a 99-year ground lease to build a 1.3 million-square-foot mixed-use development above and around the site. “As a chamber, we believe in public-private partnerships,” said Reston Chamber of Commerce Board Chair Karen Cleveland. “Without Comstock Partner and Fairfax County partnering for this project, this would not have happened,” said Cleveland. 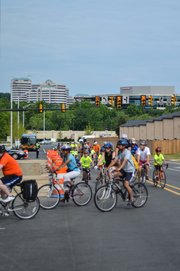 Dozens of bicyclists rode to the ribbon cutting ceremony held at the Wiehle-Reston East garage on July 19. The garage has a bike room that is the first of its kind for Fairfax County. There will be vertical and regular parking, as well as room for oversized bikes or bikes with trailers.

Wiehle-Reston East will be the end of the Silver Line for at least five years, when Phase 2 will take passengers to Reston Parkway, Herndon, Dulles International Airport and Loudoun County. “I think overall it is a very good thing for Reston,” said Ken Knueven, President of the Reston Association. “Short term issues will have to be sorted out, but the long term goal of a metro to Dulles International Airport is a wonderful plan.”

THE STATE OF THE ART transportation facility at Wiehle-Reston East is poised to bring economic benefits and ease the transportation needs of Northern Virginia. A group of local bicycle enthusiasts including Supervisor Cathy Hudgins biked to the event. Reston founder Robert “Bob” Simon also attended the event.

“Let’s thank Fairfax County staff and Comstock Partners, LC for the tremendous accomplishment in completing this project,” said Supervisor Hudgins. “This is the beginning of a new changed Dulles corridor.”

“This week marks another turning point for Reston, Tysons and the Dulles Corridor,” said Congressman Connolly. “With the opening of the Silver Line, commuters will have new choices for getting to and from the jobs centers here in Fairfax County that are driving the economies of the Commonwealth and the National Capital Region…This is a glorious day, I look forward to riding the rail with you one week from now.”

United States Under Secretary of Transportation for Policy Peter M. Rogoff said the project was a model for the country. “This project has been underway for so long,” said Virginia state senator Janet Howell. “I can promise you we are going to fight to keep the tolls low.”

Commuters using the Dulles Toll Road have been some of biggest investors of the Silver Line. Commuters are vulnerable because tolls are the one share of the Silver Line project’s funding formula not capped at a fixed dollar amount or percentage of the final tab. The result has been five years of increased toll charges that spiked a common round trip from $2.50 to $7. Had the Silver Line not received federal loans as well as $300 million in state grants, toll road users were about to cover more than half, 52 percent, of the line’s costs.

“We really are at the next phase to use rail as a mass transit medium,” said Del. Ken Plum. “This garage is transformational to the Dulles corridor,” said Del. Tom Rust. “With the opening of the Silver Line we will have access to a network of transportation options,” said Chairman of the Fairfax County Board of Supervisors Sharon Bulova.

The Reston-Wiehle East Station features Fairfax County's first enclosed, secure bicycle parking facility with a capacity for over 200 bicycles. Bulova presented Supervisor Hudgins with the first bike locker key at the Reston station. The bike room is secure and membership only. It includes fix it stations and air pumps for biker’s convenience. “We are hoping it will encourage more people to bike,” said Charlie Strunk, Bicycle Coordinator for the Fairfax County Department of Transportation.

Bicyclists, including Supervisor Cathy Hudgins, biked to the ribbon cutting ceremony held in July at the Wiehle-Reston East garage. The garage bike room is secure and membership only. It includes fix it stations and air pumps for biker’s convenience.

Smaller bike stations are planned for the future Silver Line stations at Herndon Monroe and Innovation Center near the Fairfax/Loudoun county line. “We are excited about the bike room,” said Bruce Wright, Chairman of the Fairfax Advocates for Better Bicycling (FABB). “We think a lot more people will ride to the station than drive.” Bicycle related groups including FABB, the Reston Association Pedestrian and Bicycle Advisory Committee, and Green Lizard Cycling store had booths at the event.

There was a ceremonial ribbon cutting at 10 a.m. Visitors were then free to visit and tour the facility. A Fairfax Connector store will be in operation at the Wiehle-Reston East station to offer schedules, fare media, and information about the traveling options in the Northern Virginia region.

THE BUS STATION at Wiehle-Reston East features 10 bus bays on the north side of the Toll Road, and five bus bays on the south side of the Toll Road. In addition to Fairfax Connector service, Washington Flyer will operate its Silver Line Express from the north side, and Loudoun County Transit will operate bus service from the south side.

When Phase 1 of the Silver Line opens July 26, Wiehle-Reston East will be the only onsite parking garage at the five new Metro stations in Phase 1. The garage was built as a public-private partnership by Comstock and Fairfax County. The county owns the commuter garage, and Metro will collect parking fees. Rates will be the same as at other Metro garages in the county: $4.85 per day; $65 a month for reserved parking; and $75 a year for using the secure bike room. The $75 fee includes a one-time $15 registration fee and $60 for the first year’s annual membership.

The 3,300-space garage in Reston opens at 9:30 a.m. on July 26. Parking will be free that day as it will be on all weekends. Two thousand three hundred of the spaces are public spaces so those will not change. Comstock owns the other 1,000 spaces. They are available now but will go away when there are leaseholders in the buildings on the plaza.

“We will finally be one step closer to connecting our nation’s capital with its premier international airport, a vision first mentioned in a 1962 federal transportation report,” remarked Congressman Connolly. “That report spoke of a ‘Super Rail’ connection between downtown and Dulles Airport. The proposal for what would become the Silver Line wasn’t far off, and I would venture to say that what we see before us today is more than ‘super’ - it’s stupendous!”