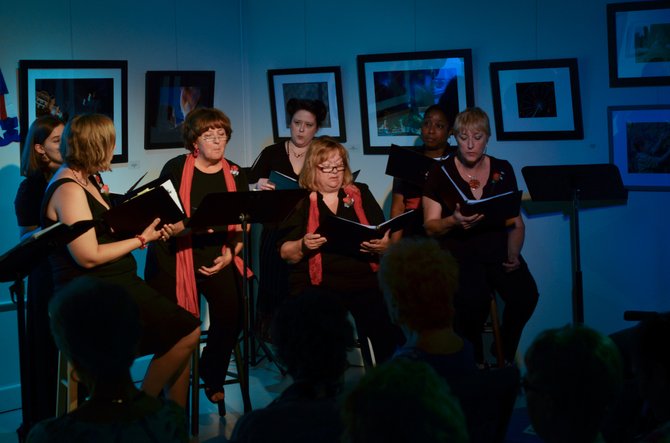 The women of Voce Chamber singers had a summer concert at ArtSpace Herndon on July 12. They sang hit songs of the 1940’s and ‘50s. Photo by Ryan Dunn.

Although school is out and summer is in, downtown Herndon is still being active. On July 9 and July 10, reporters from channel NBC4 visited downtown Herndon to share some of the special qualities of the town. “We wanted to emphasize how great Herndon is incorporating the community,” said NBC4 reporter Angie Goff. Goff is an alumnus of Herndon High, and was able to visit several sites and attractions that make Herndon unique. Herndon is the third largest town in the commonwealth of Virginia, and will be seeing some new rails soon with the addition of the Metro Silver Line.

“With the metro coming, we are going full circle as a rail town.”

“It really has this small town charm, that’s the feel you get when you come to downtown Herndon,” said Goff. Goff and her team visited the historic Herndon Depot museum where they spoke with former Herndon council member Charles D. Waddell, president of the Herndon Historical Society. Goff spoke with Herndon council member Grace Han Wolf when they visited the ArtSpace Herndon on 750 Center Street. The video segments were later broadcast on WRC-TV, channel 4, an NBC owned and operated television station.

ArtSpace Herndon is displaying images taken within Herndon by local photographers. This exhibit will be on display until July 27. An artists’ reception open to the public will be held the evening of Saturday, July 26 from 7 p.m. to 9 p.m. On July 12, the community gallery hosted a concert by women of the Voce Chamber singers. The theme of the concert was music of the 1940s and 1950s. 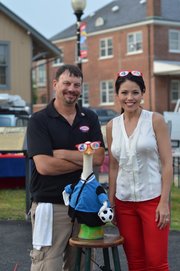 “It is a nice facility,” said Chris Borton, a member of the Voce Chamber singers. Borton accompanied the singers on the piano for the July concert. The concert audience and singers had the opportunity to view the photo exhibit. “It was fun to sing some music which we do not normally sing,” said Voce Chamber board member and founding member Gretchen Newman. In August, ArtSpace Herndon will display an exhibit on the customs and life in Konko, a village in Ghana.

The NBC4 reporters had a meal at Jimmy’s Old Town Tavern, and visited the Herndon farmers market. The Thursday morning farmers market has been held on Lynn Street in front of the caboose in downtown Herndon. A feature of the farmers market is entertainment by local artists. Performances are open to the public 10:30 a.m. to 11:15 a.m. on Thursdays on the Town Hall lawn at 730 Elden Street and will continue until August. On July 17 there will be a show by the band Rocknoceros, July 24 features Paul Hadfield "The Funny Guy", and July 31 will have a reading by children's author Kwame Alexander.

“It is pretty amazing to think that Herndon is preparing for the biggest transition we have seen in decades, the Silver Line,” said Goff. “With the metro coming, we are going full circle as a rail town,” said Herndon Mayor Lisa Merkel. In November of 2013, the Town Council, upon recommendation by the Planning Commission, incorporated a new chapter into the Zoning Ordinance to permit the type of development envisioned in the Herndon Metro Station Area Plan. The Town Council rezoned the 38 acre Herndon Transit-Oriented Core to the new zoning designation Planned Development - Transit-Oriented Core (PD-TOC).