A Music ‘Out of This World’
Votes

A Music ‘Out of This World’ 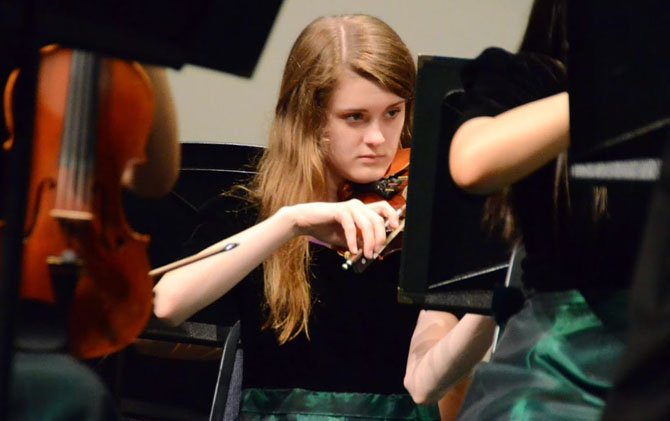 Natalie Fahlberg, this year's president of the Tri-M Honor Society, plays the violin during the senior-exclusive performance of "Transformers." Photo by Chi Pham

The Langley High School Orchestra performed its final concert of the year on Tuesday, June 3, in the Langley HS Auditorium.

The “Out of This World” themed concert was the perfect combination of presenting music and honoring the seniors as they performed on their high school stage for the last time. Directed by Dr. Scott McCormick and Ms. Bo-Min Son, Langley Orchestra enthralled the audience with music inspired by the mystery of space, receiving a standing ovation from the full house.

“The concert was a great way to end the year and the pieces performed were very captivating and fun to listen to as well as play. ‘Transformers’ was a terrific piece to close the concert and send the seniors off to graduation,” said sophomore Minh Pham.

The concert opened with the Sophomore Orchestra playing familiar music by John Williams from the movies “E.T.” and “The Empire Strikes Back.” The Philharmonic Orchestra performed another John Williams composition, “Across the Stars,” assisted by former Langley student Alyssa Katahara, who is currently studying harp at the Interlochen Arts Academy. The acoustical limits of the auditorium were tested by the Philharmonic Orchestra’s rendition of “Jupiter,” a boisterous movement from Gustav Holst’s “The Planets.” Senior Benjamin Nguyen performed an interesting piano interlude, “Attack of the Titans.” The Freshmen Orchestra presented fantastic renditions of classics in popular culture: the themes from “Star Wars,” “Jurassic Park,” and “Raider’s March.” In an attempt to release the audience’s inner nerd, the Symphonic Orchestra performed “Halo,” from the popular video game, with seniors Alex Blankinship (electric bass) and Aaron Sun (synthesizer), and guest Joseph Reilly (electric guitar). The Symphonic Orchestra combined with the Chamber Orchestra to boldly go where no Langley HS musicians have gone before in their performance of music from “Star Trek.”

Although the Langley Orchestra is an entirely string orchestra, this pops concert was performed with full orchestra which included brass, wind, and percussion instruments. Orchestra students were grateful for the opportunity to collaborate with professional musicians and Langley band students, as the variety of instruments enhanced the music and truly brought it to life. 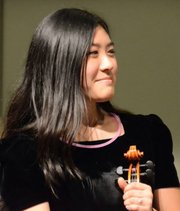 At the last concert of the year, Langley Orchestra recognizes each senior for their plans after graduation. Co-concertmaster Julia Hara smiles as she is recognized for her college plans in an honors program.

“This year was truly brilliant and we will miss the seniors so much! This concert was fantastic and the rising seniors and I will work our hardest to ensure that every concert is even more memorable next year!” said Sara Zahir, incoming president of the musical honors society, Tri-M.

In the spirit of Orchestra Tradition, the final concert of the year recognized the senior class for their four years of contribution to the orchestra. Soon-to-be graduates shared their favorite memories from Langley Orchestra when introducing songs during the concert. Following each member receiving individual recognition for their plans after graduation, the 50 seniors came together and performed a medley from the popular movie “Transformers.” Craig Hunter, Langley Orchestra alumnus, arranged the music, and Senior Aaron Sun created special musical effects on the synthesizer. “The orchestra concert was a phenomenal experience and a great way for the seniors to end their journey with a bang. From fun music to cool sound effects, everything about it was a blast!” said Langley High Junior Ali Farzad

This concert was not only the final concert for seniors, but was also the final Langley Orchestra concert performed in the Langley Auditorium until the high school has completed its renovations. The hard work of students, parents, and the Langley directors ensured that Langley Orchestra ended the year with a bang. The concert was a collaboration with the LHS science department’s Astronomy teacher Sarah Ell and her students, who brought the Outer Space theme to life in their astronomy exhibits. The LHS student tech crew, under the direction of LHS German teacher Herr Rademacher, conveyed the wonders of Space by projecting lasers onto the ceiling in time with the music.

As he bid farewell to the students of the Class of 2014, Director Dr. Scott McCormick encouraged all to “Live long, play beautifully, and prosper.”