You’ll Be In My Heart at Langley High School
Votes

You’ll Be In My Heart at Langley High School 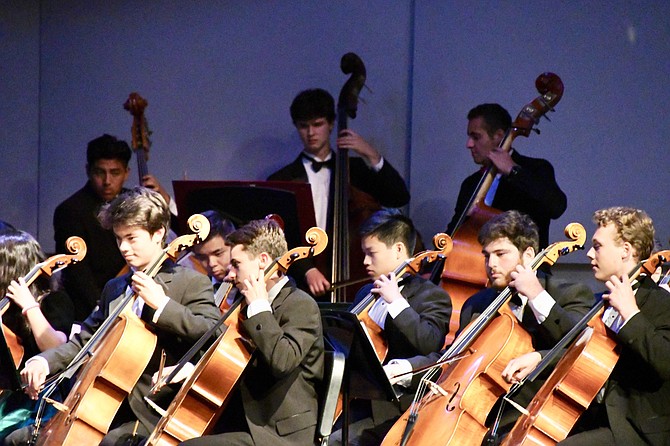 A slideshow played in the background of the senior orchestra, showing each member's plans for next year, as they performed for the last time on Langley's stage.

“If ya could change your fate, would ya?” Zachary Sutton’s question resounded in the packed Langley HS auditorium; his mimicry of a Scottish accent barely faltered. The senior bassist was presenting the Concert Orchestra’s rendition of "Brave" – the beloved Pixar animated film centered on headstrong Princess Merida.

With its dancing tune, the piece was just one of the many highlights of the Langley High School Orchestra’s Music & Animation Concert. The concert marked the end of the high school orchestral career of the Class of 2019, the largest orchestra class in the history of Langley. A final trip down memory lane, the evening was filled with senior festivities and the nostalgic songs of animated favorites.​

The evening began with the Philharmonic Orchestra and their rendition of the flight of Mother Pegasus from the 1940 Disney classic, "Fantasia." Featuring the first movement from Beethoven’s "Pastoral Symphony," the piece was a singsong masterpiece, complete with stunning animated visuals, courtesy of Langley’s amazing tech crew. The audience sat spellbound, watching the baby Pegasi and centaurs frolic in sync with the melodies of the violins and cellos. The pastel clouds of Fantasia were soon replaced with the anime characters of Hayao Miyazaki, the renowned illustrator of "Spirited Away." While various movie clips played in the background, the Philharmonic Orchestra filled the auditorium with Joe Hisaishi’s heartstring-tugging piece, "One Summer’s Day." Cao-Linh Pham, a junior cellist, was featured on the piano playing the iconic backbone of the song.

The Philharmonic Orchestra’s final piece was the main theme of "How to Train Your Dragon" by John Powell, arranged by Langley Orchestra alum Craig Hunter (Class of 2011), who was on the percussion set that night. Just as the movie showcased the tight friendship between dragon and Viking, the piece was brought to life with the aid of Langley’s own band students. ​

NEXT ONSTAGE was the Concert Orchestra led by Langley Orchestra’s assistant director, Mr. Adam Willett. Their first piece of the night was "Zooster’s Breakout," from DreamWorks’ much-loved "Madagascar." Written by Hans Zimmer and arranged by Paul Lavender, the piece had the audience’s blood pumping, and head bopping. The audience was then transported to the Scottish Highlands with the Concert Orchestra’s performance of the music from "Brave," written by Patrick Doyle, and arranged by Robert Longfield.

Lastly, in honor of Disney’s newest live action release, the Concert Orchestra presented their version of Alan Menken’s themes from Aladdin (arranged by John Moss). Featuring tunes of "Arabian Nights," "A Whole New World," and "Friend Like Me," concertgoers had a tough time refraining from singing and dancing along.

As the Concert Orchestra exited on their magic carpet, the cello choir ascended onto the stage. The ensemble of more than 20 cellos took the audience back to the fantasy world of Hayao Miyazaki, as they performed Joe Hisaishi’s "Merry Go Round of Life" from "Howl’s Moving Castle."​

The Junior Orchestra then embarked on the stage. Their first piece, themes from the "Black Panther" was soothing while containing undertones of the dramatic "Avengers" theme. Written by Ludwig Goransson and arranged by Larry Moore, the piece was complete with the percussion effects and stunning visuals of Wakanda. Next was the Junior Orchestra’s "Salute to Henry Mancini," arranged by Kazik. Beginning with the classic "Pink Panther" detective theme, the piece included Mancini’s biggest hits such as the soulful "Moon River" and the lively "Peter Gunn." These were followed by Leonard Cohen’s version of "Hallelujah" arranged by Robert Longfield, a fan favorite from "Shrek." The tune had the audience swaying with their tears in their eyes. The Junior Orchestra concluded their performance with an homage to the Marvel’s recent blockbuster, "Avengers: Endgame." Their presentation of Alan Silvestri's main theme from "The Avengers" (arranged by Larry Moore), along with the various "Avengers" video clips, had audience members (Marvel fans or not) enthralled.

Following the Junior Orchestra was the last Senior Spotlight of the night. On the far left side of the stage, pianists Alex Tran and Lauren Cain brought to life the melodies from "Beauty and the Beast." A nearly three-month effort, the piece was actually arranged by Jessica Maebius (a senior cellist in the Symphonic Orchestra) and Alex Tran. ​

As the grand finale of the night, the Senior Orchestra presented their Class Song, Phil Collins’ "You'll Be in My Heart” (arranged by Larry Moore) from "Tarzan."

The audience watched as a slideshow played in the background, showcasing each senior's picture and the logo of their chosen university. Thunderous applause consumed the auditorium as the heartfelt song came to an end. The seniors rose, smiling with tears in their eyes. The orchestra director, Dr. Scott McCormick, thanked the seniors for their contributions over the past four years.

For a moment, they reminisced over the orchestra trips, the concerts that wowed audiences, and the unbreakable friendships they had made along the way.

"If I had the chance to change my fate, would I? No!" laughed Julia Bullock, a senior violinist in the Symphonic Orchestra. She continued to explain that while there were moments she wished she could “do-over” in high school, the memories that she made via Langley’s Orchestra program were simply something that could not be replicated, nor something she would want altered. This was a sentiment shared by many of the teary-eyed seniors, as they departed the stage for the last time.

In a few days, the seniors would be Langley High School graduates; in a few months, they would be off beginning their new adventures. Although a whole new world awaits the seniors, they can rest assured that they will forever be in Langley Orchestra’s heart.