Memories of a Bittersweet Year
Votes

Memories of a Bittersweet Year

Langley Class of 2014 graduates, remembering the two who died. 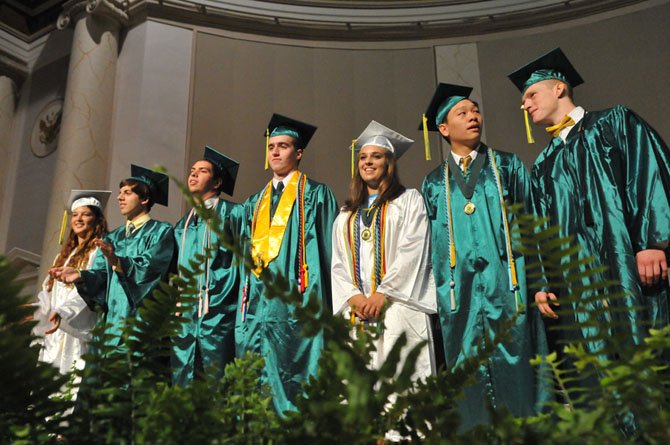 They said their goodbyes with a little bit of old and a little new.

More than 400 Langley High School seniors moved their mortarboard tassels from right to left Tuesday, June 17, at Constitution Hall, marking their transition into alumnus of their high school.

“No matter what happens, we will forever be a part of the fraternity that is the Langley Class of 2014,” said class president Jonathan Meyer during the student address.

The graduation was a bittersweet one, with many references to the two students that committed suicide in February. Although the graduation speakers interspersed jokes throughout their speeches, there was nary a dry eye among students and parents by the time the diplomas were being handed out.

Meyer’s speech began as an ego boost to the class of 2014, with vocal chants stating how great the seniors are and how students are heading to seven of the eight Ivy League colleges. 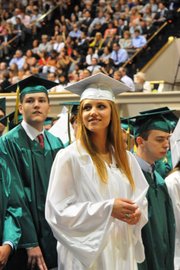 Entering the Hall the Langley High graduates scan the balconies looking for family and friends at the graduation ceremony on Tuesday, June 17.

“We would have had students go to all eight Ivy League schools, but one of them is Brown, and we don’t see color,” Meyer’s said jokingly.

However, his speech ended with a quote from one of the students who committed suicide this year, bringing the student community together to mourn and seek change within the school.

Principal Matt Ragone relayed how his favorite song, Don McLean’s “American Pie,” is actually about the 2014 graduates even though it was written in 1971.

“One of the lines is ‘February made me shiver,’” he said. “Buddy Holly died in February, and that’s when we had our tragedy.”

He said it relates to the tragedies LHS has gone through in the last year and how the community gathered to heal together.

“It’s about the loss of innocence,” he said. “It’s about young people.”

Although the song keeps stating, “this will be the day that I die,” he said, it shows how alive the singer - and the class of 2014 - is.

“You’re graduating from a world full of rejection, far removed from the rejection you experienced in high school,” he said.

McElveen is a researcher for The Brookings Institution John Thornton China Center and the youngest person to be elected to the FCPS school board.

He talked about losing all of the hair on his body to a rare disorder his senior year in high school. He remembers shopping for a hairpiece at that age at a wig shop filled with elderly women.

“Let me tell you, you have not experienced true angst until you try to fit a mortarboard over a hairpiece,” he said.

“Go out and live your life on the edge of what’s possible,” he said. “Go out and get rejected.”