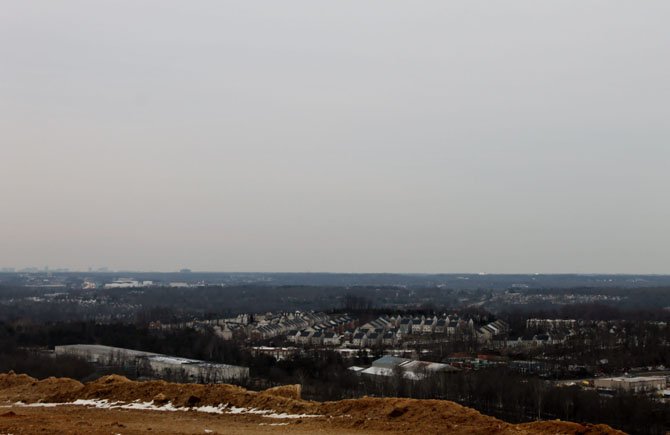 A view from the top of the landfill in Lorton. If the new application is approved, the landfill will operate until 2040 and will be home to a green energy triangle. Photo by Janelle Germanos.

On Thursday, the Fairfax County Planning Commission was set to make a recommendation to the Board of Supervisors on whether EnviroSolutions should be permitted to continue the operation of the Lorton Landfill until 2040.

However, according to Troy Manos, the communications director of Fairfax County Board of Supervisors Chairman Sharon Bulova, a motion is expected to be made by a planning commission member to delay the vote in order to establish a group to discuss issues at stake between those on both sides of the debate.

But many opposed to the application, including some members of the South County Federation, believe that promises were broken in the past. These feelings stem from a previous application in which EnviroSolutions was to build a park on the landfill after it closed in 2019.

EnviroSolutions says that due to liability issues, they are unable to take ownership of the park.

“We were required to build the park. The park authority would own the land, and we would not be part of that,” said Conrad Mehan, EnviroSolutions’ director of government relations. “At the end of the day, had the park authority not reversed its commitment, we wouldn’t be sitting here today. It’s that simple.”

According to Bill Lecos, who is working on behalf of the EnviroSolutions’ green energy proposal, liability was the main issue at stake.

“ESI is not equipped to manage the liabilities associated with people mountain biking down the property,” Lecos said.

In 2010, when it was clear to him that the park was out of the question, Mehan said he went to the South County Federation to discuss possible alternative uses for the landfill.

“I also talked about the fact that we had just gone through a horrific recession. For the construction industry, it was a depression, not a recession. I told them we would not be able to fill up the site by the time it was set to close,” Mehan said.

Around this time, EnviroSolutions was approached by a Washington Gas representative about putting wind farms on the landfill.

“As these conversations were going on, there was also a county effort to identify where there were public-private partnerships available and how that could positively impact the county’s sustainability goals,” Lecos said.

SOUTH COUNTY FEDERATION members, however, cite the buyout provisions in the application and don’t believe the green energy will come to fruition.

“There are no guarantees that they will even build any of the green energy. In fact, they can buy their way out of building them at all,” said Nick Firth, president of the South County Federation. “ESI is not a green energy company. They are a trash company. It will be a lot easier for them to buy themselves out of this than to hire an external company or third party to initialize and go through the intricate approval process explained in the SEA-2.”

Mehan said that there aren’t any loopholes, and that EnviroSolutions wants the green energy components to work out.

“If we fail, we can be shutdown,” Mehan said. “Because they brought this up, there’s a penalty cause in the application, that if for whatever reason, we do not install and operate one of the four green energy technologies, we have to pay money. It’s the equivalent of what it would cost for us to do it.”

Supporters and opponents of the application are also debating the impact the closure of the landfill will have on truck traffic.

Currently, trucks that enter the landfill must do so from the south to avoid driving through roads that pass by communities. If the current application is not approved and the landfill closes by 2019, a recycling center will be built across the street, as determined in the 2006 application.

According to Mehan, about 400 trucks a day come to the landfill.

Mehan said the trucks will likely use the route from the north to come to the recycling center, and EnviroSolutions cannot afford to apply the same condition that prohibits truck traffic from the north on the new application.

“That condition drives up the cost of the trucking operations,” Mehan said. “The cost of the recycling facility is much higher than the landfill.”

The trucks wouldn’t be going down residential streets, but would be able to use roads such as Hooes and Lorton.

“I’m very disappointed to hear the applicant state that they aren’t willing to put in that same restriction if they open the recycling center. I consider that offensive as a member of my community,” Firth said.

Some community members have concerns with environmental aspects of the green energy park, specifically regarding the wind turbines.

Catherine Ledec, who spoke on behalf of Friends of Huntley Meadows Park, which opposes the application, said the group is concerned about the wind power aspect of the green energy park.

“Not all renewable energies are suitable for every site. We support renewable energy, but this needs to be done in the right way and in the right places. For this project, the question is, are the renewable resources to generate the energy that you want to generate present at that site and in enough quantity to justify the cost, both the monetary cost and other costs, including environmental impact,” Ledec said.

A Virginia Annual Average Wind Speed Map at 80 meters does not offer a zoomed-in view of the Lorton area’s wind resources and isn’t specific to the height of the project, Ledec said, but it demonstrates that wind resources are between 4 and 4.5 meters per second at an annual average. Areas with 6.5 meters per second or greater annual average wind speeds are appropriate for wind development, according to the U.S. Department of Energy.

Ledec also cited the presence of birds, including bald eagles, at the landfill.

“Wind power has the potential to negatively impact resident and migratory birds and bats in the project area, especially a large concentration of bald eagles,” Ledec said.

According to Ivy Main, the chair of the Virginia Chapter of the Sierra Club, which has endorsed the green energy park plan, bird deaths from wind turbines are minimal.

“In general, however, the research seems pretty clear, that wind turbines fall very low on the list of ways that we humans kill birds,” Main said.

However, Main said at the public hearing that if an eagle study in accordance with federal guidelines shows that wind turbines can’t be built without hurting eagles, the wind turbines shouldn’t be built.

“I suggest that a better contingency would be to have any money not spent on wind turbines to be earmarked for solar on county land or facilities, preferably on schools,” Main said.

Mehan said that EnviroSolutions is dedicated to protecting wildlife at the landfill, and is open to bird-friendly technologies.

The Fairfax County zoning staff has recommended approval of the application. On March 13, the planning commission will make their recommendation to the Board of Supervisors.