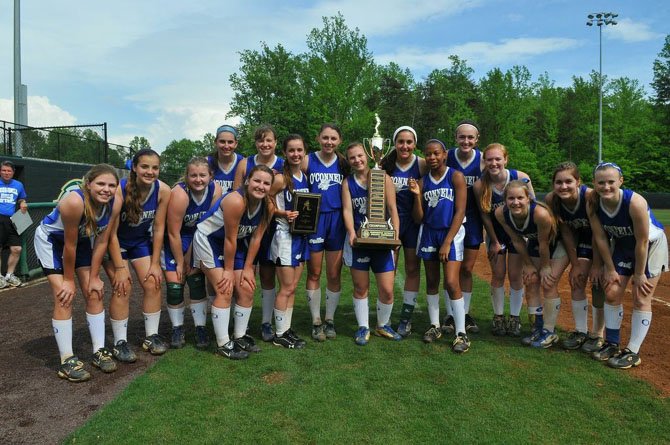 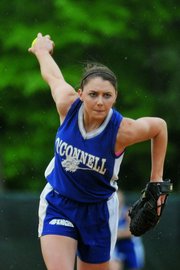 Fairfax — With rain having delayed the inevitable and extinguished excitement, the only matter of intrigue remaining when Bishop O’Connell and St. Mary’s Ryken returned to the field during the WCAC softball tournament championship game was whether O’Connell pitcher Tori Finucane would throw a no-hitter.

When the rain delay ended, O’Connell increased its lead to five runs in the bottom of the sixth before Finucane returned to the pitcher’s circle in the top of the seventh. Three pitches later, Ryken's Jordan

Aughinbaugh singled up the middle, ending the no-hit bid. Unfazed, Finucane retired the next three batters, putting an end to the contest.

Bishop O’Connell defeated St. Mary’s Ryken 5-0 on May 11 at George Mason University, securing the program’s 10th consecutive WCAC tournament title. Much like her team, Finucane is rarely tested and barely beaten. Aughinbaugh’s seventh-inning single was a minor blemish for Finucane, who walked three and struck out 11. The University of Missouri-bound pitcher also went 2-for-3 at the plate with a triple and two RBIs. O’Connell improved to 27-1, including an undefeated mark against WCAC competition.

O’Connell took an early lead when Finucane’s two-out fly ball in the bottom of the first inning was dropped by the Ryken center fielder, allowing a run to score. That’s all Finucane would need, as she mowed down the Ryken lineup, allowing just one runner to reach third base.

O’Connell led 4-0 with one out in the bottom of the sixth when game was delayed by rain.

“I think the rain kind of made us lose a little energy toward the end,” Finucane said after a seemingly subdued postgame celebration by the Knights, “but we’re still ecstatic.”

Finucane improved to 23-1 with 306 strikeouts in 147 innings. She entered Saturday’s contest with a 0.25 ERA. Finucane is such an accomplished pitcher — she was a first-team All-American last season — her ability in the batter’s box can go overlooked. After Saturday’s game, Finucane was batting .578 with five home runs and 41 RBIs. She’s a natural right-hander who hits from the left side of the plate and can do so with power. Head coach Tommy Orndorff said Finucane is “underrated” in the batter’s box.

“We just won our 10th title in a row for WCAC and I’m not happy. It’s like I’m still making [the players] reach for the stars. But if they’re there, there are goals there that we can achieve, why don’t we want to do that? We won 17 out of 19 state titles, what’s wrong with winning 18 out of 20?”

“She’s really a good hitter and she’s very good in the clutch,” Orndorff said, “and her ball seems to find holes.”

O’Connell led 2-0 in the third inning when Finucane belted a 0-2 pitch to left field for a two-run triple.

“My favorite [location] … is low and outside and that’s exactly what she threw me,” Finucane said, “and I was not about to take that, especially 0-2.”

Finucane was held out of the lineup a few games this season due to back issues. When she’s batting in the clean-up spot, her presence also helps catcher Jillian Ferraro, O’Connell’s slugger in the three-hole. Ferraro was also a first-team all-American last season and will play at the University of North Carolina. She entered Saturday’s contest batting .464 with seven home runs and 47 RBIs. Ferraro is so respected as a hitter, that she was intentionally walked with the bases loaded during a game in Cumberland, Md., this season, something Orndorff said he had never seen during his 50-plus years of coaching. When Finucane is in the lineup, teams have to think twice before pitching around Ferraro.

On Saturday, Ferraro went 1-for-3 with a double.

“For me, it’s been hard because all year long I’ve been pitched around a little bit,” Ferraro said. “… [T]hey put a little bit more strategy when they’re pitching to me. They know I like outside. I love it — and everyone in this area knows that. So this year I got a lot more inside, a lot of high and inside, which I hate.”

O’Connell will face Cape Henry in the quarterfinals of the VISAA state tournament on Tuesday, at 4 p.m. today. If the Knights win the three games necessary to capture a state championship, they will reach 30 victories in a season for the first time in program history.

“We just won our 10th title in a row for WCAC and I’m not happy,” Orndorff said. “It’s like I’m still making [the players] reach for the stars. But if they’re there, there are goals there that we can achieve, why don’t we want to do that? We won 17 out of 19 state titles, what’s wrong with winning 18 out of 20?

“I push them, but [Finucane and Ferraro] are especially motivated, themselves. That’s why they’re going to where they’re going. They’re special kids. They love this. They like to compete. Jillian comes off as the bad guy and really rough, tough in her build and all that stuff; Tori is just as vicious inside. She smiles and is really nice … [but] if she thought ripping your heart out would win the game, she’d rip it out.”