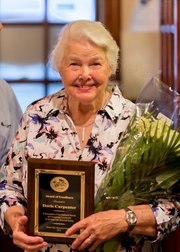 Carpenter served as Corresponding Secretary that year, then Recording Secretary for the years 1998-1999, 2000-2001 - and with an exception here or there has been serving in that position ever since. Over the past 17 years she has served as an officer or board member of GFHS continually. When Carpenter worked at the Great Falls Library, she set up a system to keep local oral histories on file. Carpenter has been steadfast in purpose, constant and steady in action, never veering from her commitments or turning aside from the task at hand - whether showing up every Saturday morning to create a public presence for GFHS at the Great Falls Farmers Market; supervising the digitization of the GFHS photo collection - even though it took one year to accomplish; remaining a loyal to your friend, Thelma, providing research on mom and pop stories. The community appreciates her exuberant personality - marching with the GFHS float at the 4th of July parade; creating the most crowd-pleasing entertainment on the showmobile at Great Falls Day 2013, and delighting little children with outdoor activities this year; and collecting Ghost Stories for Oktoberfest.

Carpenter is honored for her long and steady contribution to the Great Falls Historical Society.