Local chefs offer advice for slicing the star of the Thanksgiving table. 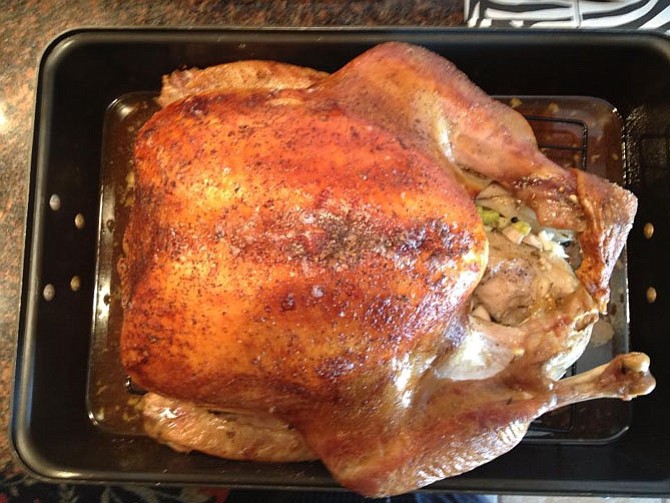 Few things symbolize Thanksgiving like a whole roasted turkey on a platter, but when it’s time for dinner, neatly sliced pieces of meat look even more appealing. Whether it’s sliced at the table or in kitchen, turkey carving can be a daunting task, however. A few local chefs share their favorite turkey-carving methods to create an impressive holiday platter.

“The first thing you want to do is put the turkey on a carving board and remove the string that’s tying the legs together,” said Susan Magruder, a caterer in North Potomac, Md. “You can do that easily with the tip of a chef’s knife.”

“Allow the bird to rest for about 30 minutes before carving to lock in its juices,” said Kristen Robinson, a chef instructor at The Art Institute of Washington. She also manages dinner service for the Art Institute’s restaurant, Culinaire, in Arlington.

“Remove the breasts first, sliding your [carving] knife on one side of the breast bone first and keeping your knife as close to the rib cage as possible,” said Robinson. “Once the breast is removed from the carcass, it will be easy to slice.”

Place the breast meat on a cutting board and slice it vertically, said Magruder. “Cut each piece about three-quarters of an inch thick,” she said. “This will give the best presentation on the platter.”

Use a carving fork to keep the turkey steady, “then face the legs of the turkey toward you and place your knife between the thigh socket. If you gently push the legs out, the socket will pop then you can remove the legs completely and place them on a cutting board,” continued Robinson. “Skin side down, you can easily remove the thighbone and slice the thigh meat.”

Magruder prefers to leave the legs intact, but according to Robinson, “the leg meat can be deboned by making a single slice along the leg bone and rolling the meat off the bone. Be sure to save all the juices and add them to your gravy.”

Removing the wings is also optional, said Robin McManus of Arlington, a graduate of the Culinary Institute of America. “If you decide to remove the wing, partially cut through the wing joint and then twist to remove the wing.”

McManus says her top tip is keeping a roll of paper towels handy, because “creating a pretty turkey platter is a messy job.”