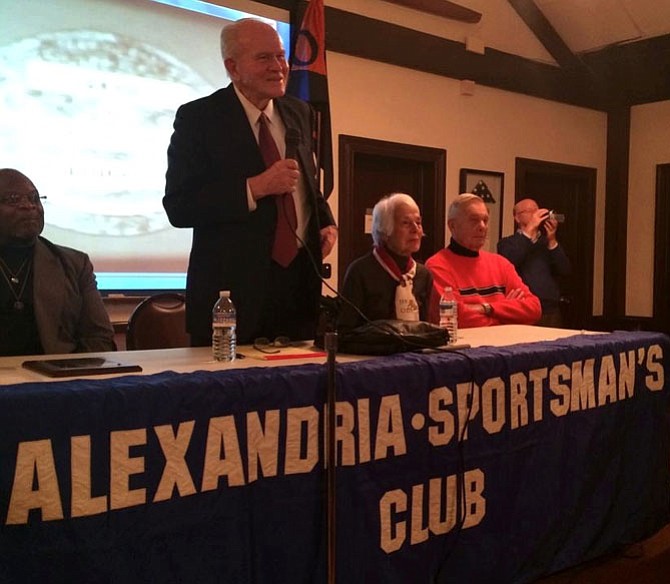 “The late 1940s marked the height of popularity for the game,” said local sports historian Greg Paspatis. “The crowd could reach 10,000 to 12,000, and in 1947, George Washington began a defense of nine consecutive Bucket victories.”

According to Paspatis, GW football standout Tommy Ennis returned from World War II that same year. His quest for a forum for the fellowship of Old Oaken Bucket participants gave birth to the Alexandria Sportsman’s Club, which hosted a tribute to the Old Oaken Bucket rivalry Nov. 18 at the Old Dominion Boat Club. 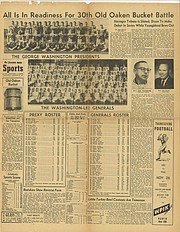 “The inaugural game was played at King Street’s Baggett Field,” Paspatis said as game alumni and fans, including former Alexandria Mayor and GW cheerleader Patsy Ticer, gathered to reminisce about the rivalry. “The game was a 12-9 GW victory.”

Storied figures emerged from the rivalry over the years, beginning with GW’s first running back, Paul Shu. Shu starred at Virginia Military Institute and was a 10th round NFL draft pick in 1940 before landing in the Virginia Sports Hall of Fame. Legendary coach A.E. “Rasty” Doran skippered the GW squad from 1938 until 1945, culminating with his own Hall of Fame induction. 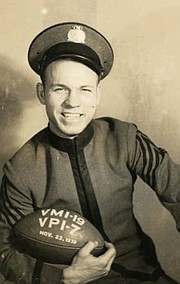 Paul Shu was a running back on the first GW High football team in 1935. A standout at VMI, Shu was a 10th round NFL draft pick in 1940 and elected into the Virginia Sports Hall of Fame in 1983.

Washington-Lee alumni Warren Beatty (class of 1955) and Super Bowl VII MVP Jake Scott (amidst the undefeated 1972 Miami Dolphins season), together with GW class of 1965 quarterback Skeeter Swift (who went on to play professional basketball), all became part of the showdown’s legacy.

The most famous Old Oaken Bucket game occurred in 1956, when in the waning seconds of a 0-0 tie, W-L’s Wayne Ballard set up for an improbable 42-yard field goal. With the season hanging in the balance, Ballard delivered a booming strike that rode the breeze, boomeranging towards the uprights.

As teammates would recall, all seemed lost from Ballard’s aim. The pigskin nevertheless collided with the crossbeam and bounced over for a stunning victory. The miraculous ending also gave Washington-Lee the Virginia High School Football State Championship. The story appeared in national publications such as Sports Illustrated, and 20 years later, the Washington Post fall sports previews recounted the tale.

Timeless narratives reignited as luminaries and competitors gathered to recall what the game meant to the area. 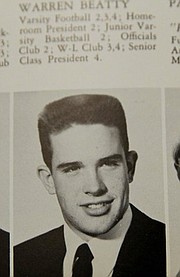 Warren Beatty, a standout football player at Washington-Lee High School, starred in the Old Oaken Bucket games in the mid-1950s.

“It seemed as if the whole of Northern Virginia flooded the stands and circumference of the field,” recalled Ticer of the crowd that gathered during her years as a GW cheerleader in the early 1950s.

Mayor Bill Euille, also a GW High School alumnus, told the ASC crowd of the strong communal spirit in the match’s later years while Carleton “Shady” Schelhorn, a defensive lineman for GW and then the University of Virginia, described his reverence for the earlier backfield tandem of Paul Shu and Lee Fones. Fones went on to play at Elon University before serving as director of the Alexandria Department of Recreation.

Washington-Lee was well represented as alumnus and Super Bowl X hero Reggie Harrison amicably touted his side’s dominance at the latter bookend of the rivalry. The final 1968 iteration featured a score of 46-6, thanks to six Harrison touchdowns.

Ballard, W-L’s hero from the 1956 match up, gathered at the ASC event with teammate Gene Sherman. The two were greeted by jeers and cheers as half of the packed ODBC hall applauded and the other half grimaced during a radio play-by-play broadcast (provided by W-L alumnus Murray Barnes, Jr.) that was seamlessly synchronized with black-and-white footage of the infamous strong-legged play that handed GW a crushing defeat.

The tradition came to an end with the institution of state playoffs after the 1968 season, thereby conflicting with a Thanksgiving Day game of stature. The matchup itself concluded with games in 1969 and 1970 on alternate dates, but the Old Oaken Bucket had seen its last true pailful of excitement. The final record ended at 21-12-3 in favor of Washington-Lee. 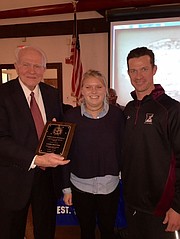 “It’s fitting for the Sportsman’s Club to host Old Oaken Bucket Night in the week before Thanksgiving,” said Paspatis, who was the driving force behind the event. “With many of the game’s most celebrated contenders and admirers together again, the bonds and relationships forged by the contest are as alive and formidable as ever.”