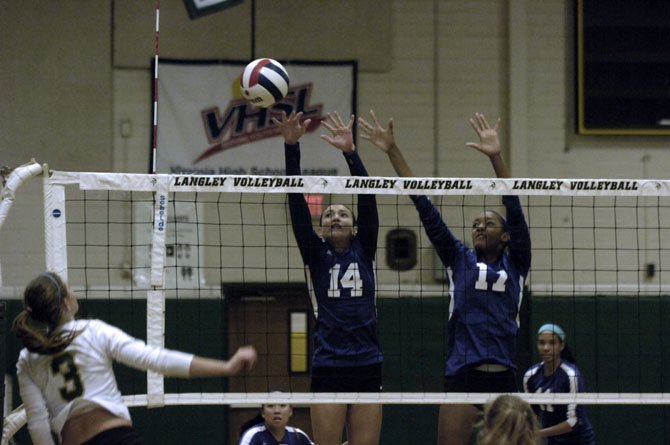 Chantilly's Julia Recto (14) and Simone Jeffries jump for a block attempt during Monday's match against Langley. Photo by Craig Sterbutzel. 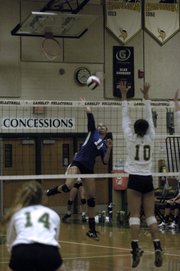 Chantilly senior Kathryn Young finished with 14 kills during a win over Langley on Monday.

In 2011, Kathryn Young and her fellow freshmen on the Chantilly volleyball team made a goal to reach the state tournament at some point during their four-year high school careers.

Now a senior, Young and the Chargers feel pretty good about their chances of qualifying for states. On Monday, Chantilly had an opportunity to test itself against defending VHSL 6A state champion Langley, and the Chargers passed with flying colors.

After dropping the first set, the Chargers re-grouped and defeated the Saxons 3-1 (24-26, 25-19, 25-22, 25-23) at Langley High School. Chantilly failed to hold a late lead in the opening set, but the Chargers didn’t let that slow them down for the remainder of the match.

“It’s just their personality,” Chantilly head coach Charles Ezigbo said of the Chargers bouncing back from losing the first set. “They usually are relentless. I really don’t have to say a whole lot to pump them up.”

The 2014 Langley volleyball team isn’t the same squad that won the state title last season. Alex Andrejev, the 2013 Virginia Gatorade Player of the Year, graduated and is playing for Columbia University. Junior outside hitter Jess Donaldson, an all-state selection in 2013, suffered a torn ACL earlier this season and is out for the year. However, the Saxons entered Monday’s match with an 8-1 record, including seven consecutive victories.

“It’s a confidence builder, beating a team like Langley,” Ezigbo said. “… A win like this will give the girls the feeling that they can compete with the better teams in the region.”

Chantilly improved to 5-2. Young, who is committed to the University of Virginia, led Chantilly with 14 kills.

“We knew we could at least hang with [Langley],” Young said. “It just validated that we can go [further in the postseason] than we have in past years.”

Chantilly senior outside hitter Madison Lutz finished with nine kills, including the match-winner in the fourth set. Sophomore outside hitter Julia Recto had four kills, and senior setter Emily Booker had three aces.

While Langley fell short, head coach Susan Shifflett pointed out there is still plenty of time to prepare for the postseason.

“I was actually very pleased with the way they played,” Shifflett said of the Saxons. “With Jess going down, we had to do some figuring out. We’re really young. To battle Chantilly like they did, I’m good with that. Our learning curve is going to be huge. We still have over a month to get ready for when it really counts.”

Senior Rachel Andrejev has been the Saxons’ go-to hitter this season. She finished with 11 kills on Monday. Kristian Stanford finished with a team-high 13 kills. Shifflett said Stanford has the ability to be a consistent contributor and help pick up the slack created by Donaldson’s injury.

“I think Kristian Sandburg can do it,” Shifflett said, “she just needs to get a little rhythm going.”