Senior signal caller has Cardinals at 5-1 after transferring from El Paso. 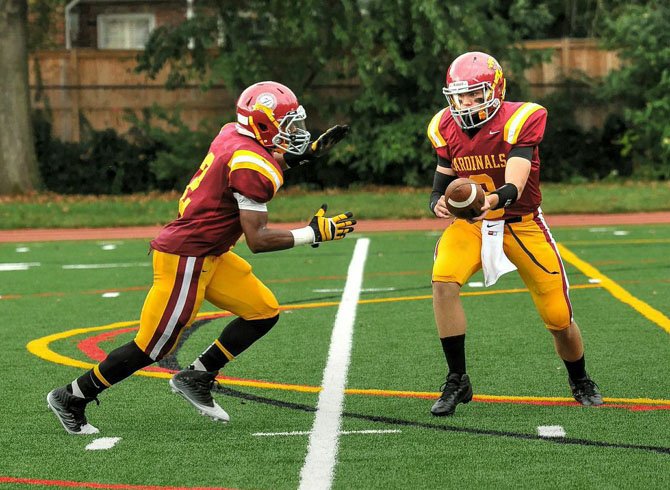 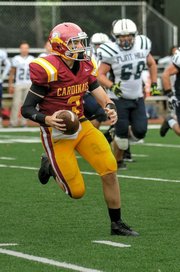 With his team down by four points in the second quarter against Flint Hill on Oct. 3, Bishop Ireton quarterback Joe Dickinson rolled to his right and looked for his fullback in the flat.

Dickinson’s first option wasn’t open, so the senior signal caller looked for the second read in his progression, a receiver running a streak route. A Flint Hill defensive back had the receiver covered, however, so Dickinson considered trying to pick up a few yards with his legs. But before he took off down field, Dickinson decided to look for the receiver running a backside post route. He noticed 6-foot-3 senior Ryan Scott matched up with a shorter Flint Hill defender and decided to attack.

Dickinson cut loose, throwing across his body, and delivered a perfect strike to Scott, who hauled in the pass for a 26-yard Bishop Ireton touchdown.

“I thought my arm strength was good enough [to] get it there,” Dickinson said. “It worked out for the best.”

Dickinson’s touchdown toss helped the Cardinals to a 24-21 victory over the Huskies at Bishop Ireton High School. Dickinson completed 15 of 24 passes for 152 yards and three touchdowns. Two of his touchdown tosses came while he was rolling to his right, including a 5-yarder to Drew Smith early in the fourth quarter.

Friday’s victory improved Bishop Ireton’s record to 5-1 and was the latest accomplishment for Dickinson, who has found a way to succeed while on the move.

Dickinson, a Fort Belvoir resident, transferred from Chapin High School in El Paso, Texas, to Bishop Ireton in January when his father, James Dickinson, now a major general in the U.S. Army, was assigned to Washington, D.C. Dickinson, who was born in Kansas, said his family has moved 12 times, including stops in Korea and Hawaii.

The 5-foot-11, 180-pound Dickinson started playing football as a freshman in Hawaii, where he was a slot back. He moved to El Paso as a sophomore, where he started at quarterback on the Chapin JV team. As a junior, he was the varsity backup quarterback, stuck behind Division I prospect Seth Gonzales, who is now a freshman on the Army football team.

Dickinson moved to the Washington, D.C. area during his junior year. His school choices came down to Bishop O’Connell and Bishop Ireton.

O’Connell was set at quarterback, with senior Michael Galvan entering his second season as the starter. Ireton head coach Tony Verducci offered Dickinson an opportunity to compete with three other athletes for the Cardinals’ starting quarterback position.

Dickinson got to work immediately upon arriving at Ireton and eventually won the job during the summer. How did a new kid in school go about competing for the most important position on the football team?

“I think a big thing is just leading by example,” Dickinson said. “Talk is cheap. Here, I had to be less verbal. A lot people do a lot of lip service. [I chose to] just be there for the guys — never missing a workout, never missing a practice, never being late to practice. I think once they see that, they start to think we need to step up. Joe is going to lead us; we’re going to back him up. The guys have been great.”

Bishop Ireton receiver Ryan Scott attempts to haul in one of Joe Dickinson’s passes during an Oct. 3 game against Flint Hill.

“I think If he had come in being loud and talkative, a lot of people would have tuned him out because he hadn’t been here for the four years,” Blaszkow said. “We have a great senior class, with guys like [receivers] Drew [Smith] and Brenden [Peifer], who have been together since their freshman year, and by just coming in and going about his business and working hard, he’s gone about showing [his teammates], I can help you guys and I can be a part of this.”

Verducci said it didn’t take the Cardinals long to buy into Dickinson as their quarterback.

“I was really impressed with how much of an expectation that Joe’s teammates developed without having ever played a game with him,” Verducci. “There was such a level of confidence in him … running the offense, it allowed him to just move forward, further grasping the concepts.”

Dickinson delivered once the Cardinals took the field. In six games during his first season as a varsity starter, Dickinson has completed 60 percent of his passes (103-171) for 1,391 yards, with 14 touchdown passes and five interceptions. According to stats from the Washington Post’s allmetsports.com, Dickinson is third in the Washington, D.C.-metro area in passing yardage and seventh in passing touchdowns.

“If you were to tell someone that he’s never started a game, I think they’d be shocked,” senior receiver Smith said. “He fits right in with what we do. He’s delivering the balls where they need to be, when they need to be thrown. He’s doing a good job.”

Smith has been Dickinson’s top target, catching 27 passes for 563 yards and nine touchdowns. Scott has 15 catches for 123 yards and a touchdown. Peifer has seven receptions for 117 yards and two touchdowns.

How has Dickinson done it?

“One of his best qualities is his ability to move on from a mistake and not dwell on it,” Blaszkow said. “He’s got a great head on his shoulders from that standpoint. He did a lot of the work himself, as well, by making his teammates believe in him through his work. He would go out and whether it was the weight room or on the field after school when we’d get together and run, a lot of people started to believe in him from that standpoint. 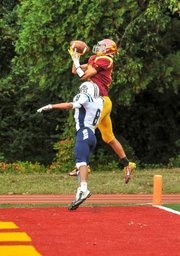 “… He’s an extremely coachable kid. He takes criticism and builds from it. There are some kids you coach, where if you say anything has gone wrong they shut down and he’s not that kind of kid. He rises to the challenge. He wants to compete and I think that’s one of his other great qualities: he’s a competitor.”

Off the field, Dickinson said it didn’t take him long to make friends, something he attributes to having moved so many times during his childhood.

“That’s always probably the toughest thing about being a military kid,” Dickinson said. “I learned at a young age, you can make friends here, but you’re going to move soon. I was kind of a quieter kid. It kind of forced me to be more outgoing, get to know people. Now it’s easy.”

Dickinson said keeping up with schoolwork at Ireton has been challenging. Bishop Ireton is the first private school he has attended and he said he had to adjust to the workload.

On the field, Dickinson and the Bishop Ireton Cardinals have earned the No. 2 spot in the VISAA rankings with their 5-1 start. Ireton will host No. 1 Benedictine at 1 p.m. on Saturday, Oct. 11. Dickinson’s performance will likely play a major role in whether the Cardinals can knock off the Cadets.

“I just really want to thank Coach Verducci for giving me a chance,” Dickinson said. “I always felt like I’ve been the underdog, that’s why it’s great coming to Ireton — because we’re always the underdog. I just thank him for that chance because a lot of people wouldn’t have taken a chance on me [with no starting experience].”