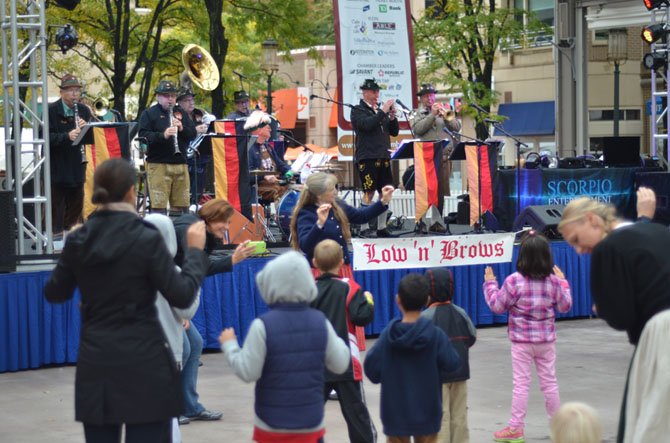 At the Reston Town Center Pavilion the Fredericksburg based Low 'n' Brows provided music for polkas, waltzes and other traditional German "hofbrau haus" music. They also performed the “Chicken Dance” which was popular for the children and parents. Photo by Ryan Dunn.

Despite overcast weather, the 2014 Oktoberfest was held again at Reston Town Center with Alpine Dancers, exhibitors, Oktoberfest fare, beer and carnival rides. On Saturday the Guns 'n Hoses Chili Cook Off was held as teams of Firefighters and Police Officers competed for the coveted “Best Overall Chili” and “People’s Choice” awards.

Winners of the chili competition were announced at 5 p.m. on Saturday, Oct. 11. One of the judges was Fairfax County Board of Supervisors Chairman Sharon Bulova.

Announced as winners of the People's Choice Award for the chili cook-off was the Fairfax County Police Department. The team consisted of Fairfax County Police Officer Dean Tran, his wife Sarah Tran, and Tom Divers. “We have done this a couple of years,” said Dean Tran. “We come together to have a bit of fun with people of the community.”

The Fairfax County Police Department’s chili was a sweet, savory chili with cinnamon, chocolate and Guinness beer. The team decided to use the same recipe from the 2012 Guns ‘n Hoses Chili Cook-off. “It is a perfect day for chili,” said Sarah Tran.

On Saturday, Oct. 11 the Guns 'n Hoses Chili Cook Off was held at Reston Town Center as teams of Firefighters and Police Officers competed for the coveted “Best Overall Chili” and “People’s Choice” awards. Winners of the People's Choice Award for the chili cook-off was the Fairfax County Police Department. In the photo are Police Officer Dean Tran, his wife Sarah Tran, and Tom Divers.

Team "Limp Brisket," led by Fairfax County firefighter George Hahn from Burke Station 14 was announced as winner of the Guns 'N Hoses Chili Cook-off. The chili they cooked was a 'drunken piggy chili".

“I would describe it as smoky with a southern kick,” said team member Drew Mitchell. Winners of the competition received gift cards donated by Reston Town Center.

“This is the first year we have had 16 craft beers at the event,” said Mark Ingrao, President of the Reston Chamber of Commerce. The Greater Reston Chamber of Commerce has produced Oktoberfest Reston for the past six years. Brews were provided by craft brewers including family-owned Old Ox Brewery and Old Bust Head Brewery. There was also a beer garden by the main pavilion with beer on tap.

AT THE RESTON PAVILION the Fredericksburg based Low 'n' Brows provided music for polkas, waltzes and other traditional German "hofbrau haus" music. The Maryland-based Alpine Dancers, an ensemble specializing in dance from Austria, Germany and Switzerland, performed at the Reston Oktoberfest and invited members of the audience to participate. “It was a wonderful event, we love dancing here,” said Carol Traxler who helps lead the Alpine Dancers. Bands which also performed at the pavilion included Lovely Rita and The Fuzz.

Some Reston Town Center store employees debated whether the festival brought increased customer traffic. “The festival did not generate us extra customers, I think the crowd which attends here is mostly to dine,” said Liz Gardner, resident of Reston and manager for the Appalachian Spring located on Market Street in Reston Town Center.

“If the weather was nicer, there may have been more customers,” said Ilona Bentsi-Enchill, an employee at women’s clothing store Talbots.

"This is definitely the place to be this weekend, with all the crowds in the Town Center and perfect fall weather this evening,” said Reston resident Adam Bennett. “Great time enjoying the music, food, and brew with friends.”