Mutiny at the Debate
Votes

Mutiny at the Debate 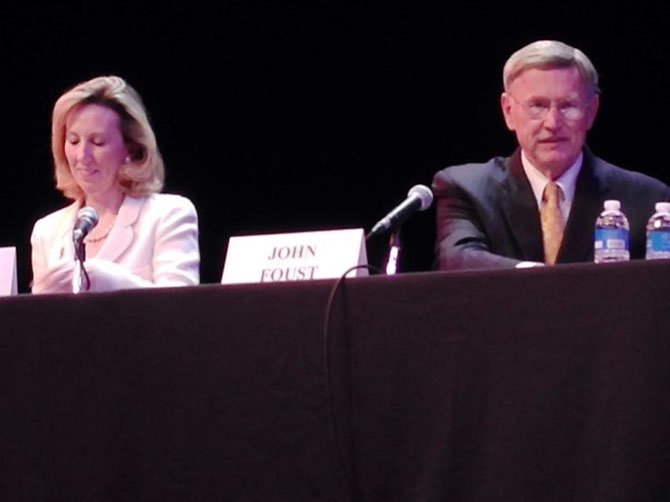 The stark stage at McLean Community Center’s Alden Theater served as the backdrop for the final debate between Republican Barbara Comstock and Democrat John Foust co-hosted by The McLean Citizens Association and the Great Falls Citizens Association on Sunday afternoon, Oct. 26. Photo by Victoria Ross.

The candidates took their seats next to each other on the stark stage of the McLean Community Center’s Alden Theater, and battled for 90 minutes over who would really bring a bipartisan approach to Congress.

Comstock cited her work on several bills that received bipartisan support in the Virginia House of Delegates, including legislation to combat human trafficking and Lyme disease. Foust said that as a Fairfax County supervisor, he has worked in cooperation with Republicans to balance seven county budgets.

In response to a question about how the candidates would help the region’s many federal workers impacted by sequester cuts and last year’s government shutdown, Comstock argued that she could be more effective than a Democrat.

“It’s important to have a Republican voice fighting for our federal employees, and I will be that voice,” she said. “We don’t need to have the budget balanced on their backs.”

She said the government shutdown of 2013, was “unconservative, irresponsible and it should never happen again,” drawing applause.

THE GLOVES WERE OFF for Foust, the Dranesville District supervisor who, political pollsters say, has lost some electoral ground to Comstock in the past few weeks. Foust repeatedly accused Comstock of being a “hyper-partisan” operative and confronted Comstock on her record regarding social issues, a topic that was off-limits in previous debates.

Foust called Comstock’s position on gun control “scary,” and blasted her vote to repeal Virginia's law limiting handgun purchases to once a month. “She gets an A from the National Rifle Association,” Foust said dryly.

Comstock said she worked on Virginia’s recent mental-health reforms that she said would make Virginians safer while preserving their Second Amendment rights.

She also said she supports adding school resource officers to schools. “We need to help prevent violence and keep students safe,” she said, “not just against guns, but for bullying and human trafficking. Virginia has been a model for other states. It’s another example of bipartisans coming together to protect our second amendment rights while making us secure.”

Foust was scathing in his reply.

“There have been 87 school shootings since Sandy Hook … that’s unconscionable. Frankly, Delegate Comstock’s position is scary,” Foust said. “She voted to let people have guns in bars. Virginia was the gun-running capital of the south, and Democrats said let’s limit the purchase of guns to one a month for 12 months. Last session, Delegate Comstock voted to eliminate that law. Virginia is now open for business, and it’s a huge step backwards.”

Foust also slammed Comstock for her opposition to the Supreme Court’s 1973 Roe v. Wade decision legalizing abortion, and her vote in favor of the controversial “transvaginal ultrasound” bill in the Virginia legislature.

“First of all, there are good people on both sides of these difficult issues,” Comstock said, “What we do in Congress is about federal funding of abortion, and I’ve always supported funding in cases of rape, incest or when the health of the mother is in danger.” Comstock said she also supports making birth control available to women over the counter.

“I don't demonize people,” Comstock added. “I want to work together, to find ways we can bring people together and not fight …”

"Of course you don't want to fight about it,” Foust shot back, calling Comstock’s position on abortion “beyond the pale.”

“What you really want to do is get people off your back for not standing up for a woman's right to make her own health care choices,” Foust said, drawing loud applause from his supporters.

Foust continued blasting Comstock for serving as co-chair of the Susan B. Anthony List, a political action group dedicated to electing pro-life candidates, and claiming that Comstock called herself “a ‘warrior’ in the pro-life movement.”

WHEN MODERATOR Sally Horn, MCA’s president, said there was no time left in the 90-minute debate for Comstock to give her rebuttal, and suggested the candidates move on to their three-minute closing statements, the audience became mutinous, booing and hissing at each other, the moderator and the candidates.

When Foust launched a call-and-response in his closing statement – asking several times if “Barbara Comstock can be trusted” – audience members competed with shouts of “yes,” “no” and “shut up.” The shouts interrupted his remarks so many times that Horn offered him an opportunity to start over. That action sparked a brief scuffle in the balcony section of the theater.