Power of teamwork on exhibit at the 22nd Annual Plane Pull Sept. 20. 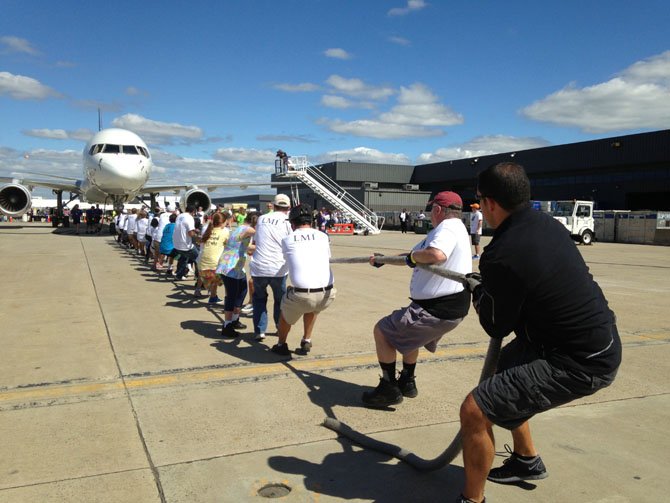 Teams of 25 will compete to see who can pull the airplane 12 feet the fastest. Photo contributed

Looking for a great way to unite friends, family and coworkers in a common cause? Rally your fellow weekend warriors and pull a 164,000+ pound Airbus at the 22nd annual Dulles Day Family Festival and Plane Pull, Sept. 20 from 11 a.m. to 4 p.m. at Dulles International Airport. All proceeds benefit Special Olympics Virginia.

Teams of 25 will compete to see who can pull the airplane 12 feet the fastest. Teams must raise a minimum of $1,500 – that’s just $60 a person – to participate. Worried about the possibility that a 164,000+ pound machine will prevail? Have no fear! Prizes will also be awarded to the teams who raise the most money, teams who show the most enthusiasm, the lightest and the heaviest teams, and even the slowest team.

Children also can get involved and earn bragging rights for school on Monday morning. The Kids Truck Pull provides a fun challenge for youngest fans to test their strength. Teams of eight will compete to see who can pull the big, red 123JUNK truck 12 feet the fastest. To participate, you must raise or donate a minimum of $10/person. All participants will receive a Plane Pull T-shirt; a prize will also be awarded to the person who raises the most money.

Not a runner? Don’t have the muscles to pull a plane or truck? That’s OK! You can still join as a volunteer, event sponsor, event exhibitor or even as a “fan” of Special Olympics Virginia. The Dulles Day Family Festival and Plane Pull, presented by the Metropolitan Washington Airports Authority and Software AG, will also feature live music, a car show, military and civilian aircraft displays, police K-9 demonstrations, business exhibits, and a special Kids Zone. There is no charge to enter the festival, although donations are appreciated. All attendees over the age of 18 will receive a door prize ticket for the chance to win a “weighty” prize.

Since the first-ever Plane Pull was held in 1993 at Dulles International Airport, Special Olympics Virginia has raised more than $2 million for athletes with intellectual disabilities throughout the state, and also started a worldwide plane-pulling phenomenon. Today, similar Plane Pulls are held throughout the year in Colorado, Maryland, Hawaii, Tennessee and Texas. The Plane Pull is a Law Enforcement Torch Run event. The Torch Run, sponsored by SunTrust and Enterprise, unites law enforcement across the Commonwealth to raise funds and awareness for Special Olympics Virginia.

For more information, to register your team, sign up to exhibit or volunteer, or for sponsorship details, visit www.planepull.com or call 703-359-4301.