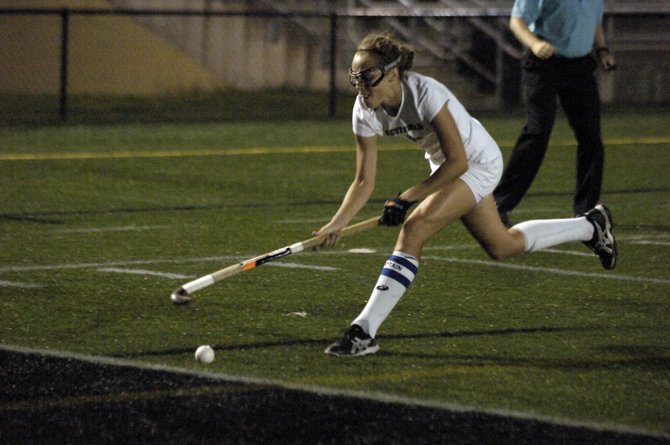 McNamara showed off her shooting skills shortly after, launching a rocket into the cage for a 2-0 advantage.

The senior’s skills are eye-catching, even when they don’t translate to success on the scoreboard. A well-struck cross that doesn’t find a teammate to finish? A nifty move through defenders that goes for naught? McNamara makes it look good.

On this night, McNamara, a VCU commit, finished with one goal and two assists, helping the Bulldogs beat West Springfield 7-0 at Westfield High School. She poses a threat as a goal-scorer and facilitator, totaling 15 goals and 10 assists in nine games this season.

“She’s extremely smart and extremely athletic,” Karl said. “When she decides that she wants to make the players around her better players, that’s when she’s at her best.”

McNamara is in her fourth year on the varsity squad. Last year, she helped Westfield win the first state championship in program history, scoring a goal during the Bulldogs’ 2-1 victory over First Colonial in the 6A final. McNamara was hardly a one-player show, however. Westfield had four seniors earn all-state honors — Katie Winesett, Katelyn Rennyson, Rachael Ulsh and Grace Horgan — each of whom went on to play Division I field hockey.

This season, McNamara is a team captain and senior leader.

“She’s taken more of a leadership role on the team,” Karl said. “She’s like the go-to person. … She’s dedicated herself and worked really hard. If I can get 60 minutes out of her every game, like, come to play and finish with 60 minutes, nobody could touch her.”

So far, so good for McNamara, who is one of the primary reasons Westfield is 8-1 this season.

“It’s weird being the oldest, with everybody looking up to me,” McNamara said, “so it’s a huge change, but we’ve adapted. … I’m definitely more vocal, and I feel more like a pathway from the team to the coaches — I’m the connector now, rather than another person.”

Along with her talents — she said she’s improved her skills in the past year — McNamara’s 5-foot-8 1/2 frame and long reach help her on the field.

“It’s my specialty,” McNamara said of her reach.

Westfield has more than one talented athlete. Junior forward Claire Eller and freshman midfielder Mackenzie Karl each scored two goals against West Springfield, and freshman forward Nicki McNamara, Emily’s sister, and sophomore midfielder Markert each scored one. However, Emily McNamara is the leader of a Bulldogs team looking for another successful finish to the season, starting with a home game against Robinson at 7:30 p.m. on Thursday, Sept. 18.

“She’s definitely one of the most talented kids I’ve ever coached,” Karl said. “I’ve had quite a few, but she’s absolutely up there.”