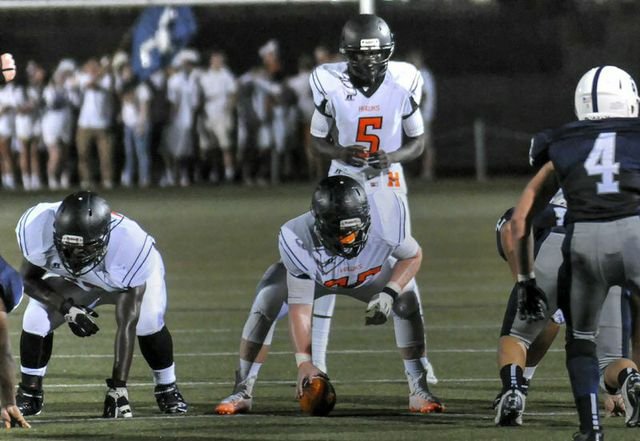 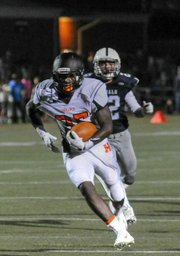 Midway through the fourth quarter of Friday’s contest against Washington-Lee, Hayfield quarterback Sheldon Isaac slipped a pass between a pair of defenders and into the hands of receiver Tyler Hodge for a 21-yard touchdown, putting the finishing touch on another stellar offensive performance.

This time, however, big-time statistics translated to victory for the Hawks.

After starting 0-3 against a brutal early-season schedule, the Hayfield football team produced a season-high point total and earned Eric Henderson his first win as head coach of the Hawks, beating W-L 49-20 in Arlington.

Isaac completed 22 of 30 passes for 351 yards and three touchdowns against the Generals. He also scored a rushing touchdown.

“It feels good,” Isaac said. “We’ve been working for a long time so it feels good to get the first win.”

Isaac, a 6-foot-3, 180-pound senior, passed for 947 yards in Hayfield’s first three contests, but the Hawks started 0-3, losing to South County (Stallions are 5-0), Westfield (2013 6A North region runner-up) and Centreville (2013 6A state champ). On Friday night, Hayfield scored on its first play from scrimmage, an 8-yard run by Isaac, and led for the remainder of the game.

“It feels so good to win a game,” a Hayfield player said on the sideline with the Hawks comfortably ahead during the fourth quarter. After the game, players celebrated with the school band.

Did facing tough competition in their first three games help the Hawks prepare for the remainder of their season?

Isaac’s right arm figures to be of great assistance as Hayfield tires to climb out of a 1-3 hole. A first-year varsity starter, Isaac won the job during 7-on-7s in the offseason.

“He worked incredibly hard in the offseason --- really watched a lot of film, did all the 7-on-7s, worked out with the wide receivers on his own, he just really took to the offense,” Henderson said. “… You could see early in the summer, he just started figuring it out. … He throws with a lot of confidence right now.”

Henderson spent the previous two seasons as an assistant coach at Lake Braddock. He was the team’s offensive coordinator in 2013, helping his son, quarterback Caleb Henderson, direct the Bruins’ spread attack. Prior to assisting at Lake Braddock, Eric Henderson was the head coach at West Potomac, where he led the Wolverines to a share of the 2011 Patriot District title with Caleb as a standout sophomore signal caller.

During the offseason, Caleb Henderson, now a freshman on the University of North Carolina football team, helped teach his father’s potent spread offense to Isaac. So far, so good for No. 5, who is averaging more than 300 yards per game.

“[Coach Henderson] loves to pass the ball,” Isaac said. “I just happen to be in the right situation at the right time.”

Isaac’s first touchdown pass was a 30-yard toss to Hodge with 8:58 left in the second quarter, giving Hayfield a 14-0 lead. Isaac hit Pannell with a 10-yard scoring strike with 3:34 remaining in the first half, giving the Hawks a 21-0 advantage. His third touchdown pass was a fourth-quarter dart to Hodge into double coverage. 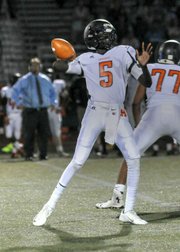 “It was funny, because [Hodge] was supposed to run a different route, but he adjusted,” Isaac said of his final touchdown pass. “[We] have a lot of chemistry and we just connected. He made a great catch.”

Hayfield also got a big night on the ground from senior running back Myles Ross, who carried 21 times for 115 yards and three touchdowns.

Washington-Lee quarterback Ronnie Fecso completed 17 of 33 passes for 198 yards and two touchdowns. He was intercepted once.

“When you’ve got a better athlete running in space and our kids weren’t as physical as they needed to be to disrupt their timing, it’s a recipe for [failure],” Shapiro said. “… When it comes down to it, we didn’t have an answer for 35 and 4. The quarterback threw the ball well, we didn’t put him on the ground [and] they kept a clean pocket.”