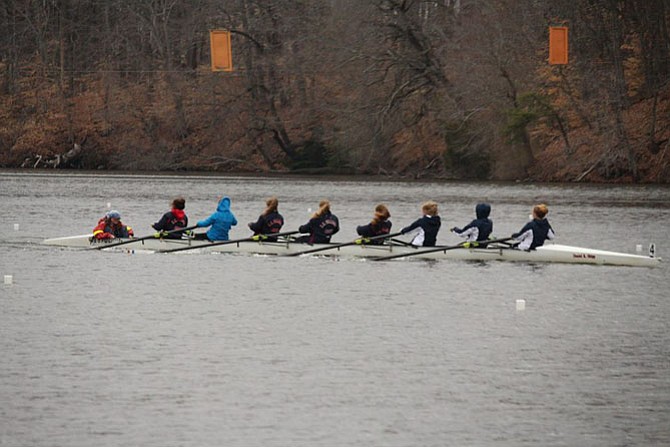 The T.C. rowing community came together to honor former T.C. head coach and rower Jon Schildknecht by naming its newest racing shell after him. At a March 21 ceremony at the Dee Campbell Boathouse in Old Town, Jon christened the new boat with Potomac Water and watched as the T.C. Williams boys’ first 8 took the boat out for its first voyage.

The T.C. Williams crew team braved wintery conditions on Saturday, March 28 to compete in its first away race of the spring 2015 rowing season – the Noxontown Regatta, which was held at St. Andrew's School in Middletown, Del.

The Titans — to borrow a phrase from the movie — seized the day. They finished first or second in six races. Putting in an outstanding performance, the T.C. Williams boys’ freshman 8 stormed down the 1,500-meter race course, winning their race by 8 seconds over rival Robinson and a field of tough competitors, with a time of 5:44.0. The boys’ freshman 8 is coxed by Michaela Gleeson and includes Stefanos Psaltis-Ivanis, Julian Depeyrot, Jake Souza, Conner McGivern, Bryce Cook, Ahmad Shujah, Wogan Snyder, and Ian Willmore. The boat is coached by coached by Enoch Cleckley.

The Titan girls’ lightweight 8 demonstrated that they are a force to contend with this season, earning second place behind Holy Spirit, the school that has won the national championship for the past three years in this category. The TC team finished a mere 10 seconds behind Holy Spirit, with a time of 6:02.5. This is the first year since 2010 that T.C. Williams has fielded a boat in the highly competitive lightweight category. Members of the T.C. lightweight boat include Elizabeth Roda (cox), Rachael Vannatta, Olivia Anthony, Sierra Arnold, Abby Prall, Sarah Scroggs, Caroline Hill, Emily De-Bodene, and LeeAnn Richards. The lightweight 8 is guided by coach Jaime Rubini.

The Titans’ powerful performance at St. Andrew’s followed a scrimmage held against Washington-Lee High School at the Dee Campbell Boathouse in Old Town on March 21. This was the latest round of an annual rivalry that goes back 65 years to 1949. The Titan boys performed well in races against a Washington-Lee. The W-L girls decided to stay behind in Arlington to get in some more practice time. As a result, instead of racing against the Generals, the Titan girls raced against the clock in a series of 500-meter and 1500-meter time trials designed to gauge the performance of different line-ups and check their speed going up the Potomac River course.

The March 21 event at the Dee Campbell Boathouse also included the christening of a new rowing scull, the “Jon Schildknecht,” to honor a former Titan Head Crew coach and rower who contributed in so many ways to the sport of rowing in Alexandria. Over 100 supporters gathered to honor Schildknecht, as he christened the boat with water from the Potomac River. His wife and former T.C. rower Carter Kidd Schildknecht and their three future T.C. rowers, Ingrid, Liesl and Hans, joined in the celebration. Schildknecht then supervised the launching of the new shell for its first voyage by the T.C. boys’ varsity 8, who will use the boat this season.

The next race for the crew is Saturday, April 4, when the Titan rowers return to St. Andrew’s to take on once again some of the toughest challengers on the East Coast at the Noxontown Regatta No. 2.