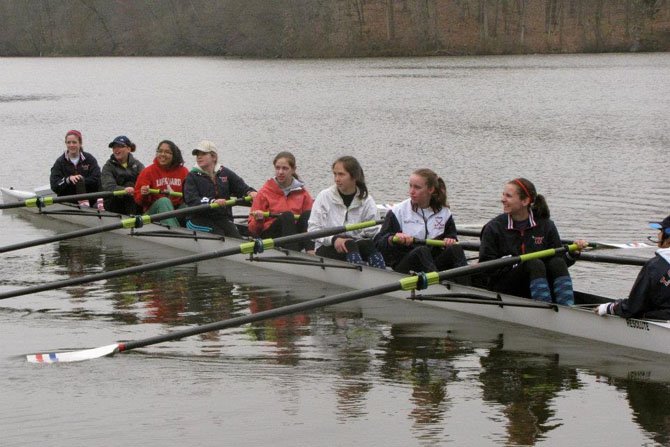 The T.C. Williams Girls Freshman 8 head out for a practice run before the Noxontown Regatta in Delaware on the morning of March 31. The Freshman 8 would go on to capture 1st place in their race later in the day. Members of the boat include (from right to left): coxswain Kathrina Policarpio and rowers Maeve Bradley, Kyra McClary, Maura Nakahata, Claire Embrey, Lynn Stevens, Ana Diaz, Rachael Vannatta and Zoe Gildersleeve. Photograph submitted

Leading the way for TC were the boys’ varsity 4, the girls’ freshman 8, and the boys’ lightweight 8, which not only won first place in each of their respective races, but did so by sizable margins, as well. The TC boys’ varsity 4 — which won the Virginia state championship last year — cruised to victory with a winning margin of 33 seconds, while the girls’ freshman 8 crossed the finish line 19 seconds ahead of their nearest competitor. The TC boys’ lightweight 8 captured top honors nine seconds ahead of the competition.

With their oar blades rising up from the water in perfect unison, the T.C. Williams boys’ varsity 4 sprint toward the finish line on their way to an overwhelming victory at the Noxontown Regatta in Delaware on March 31. Members of the boat include (from left): rowers Cameron Pattisall, Madison Weitekamp, Henry Anderson, Greg Montenegro and coxswain Mark Comey.

The T.C. crew team’s next event is Saturday, April 14, when the girls return to St. Andrew’s and the boys travel to Occoquan for the Darrell Winslow Regatta.