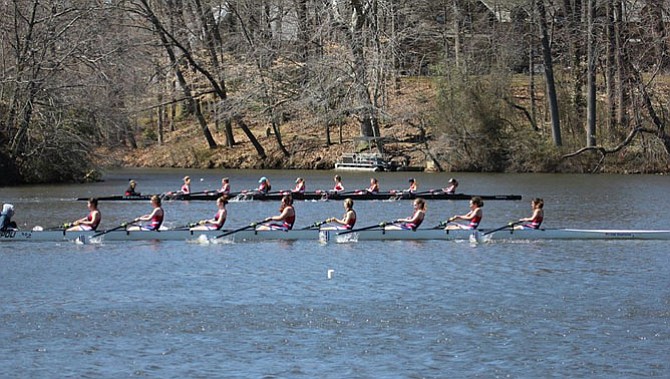 The T.C. girls’ freshman 8 take a leisurely row by the T.C. fans after a practice run at Noxontown Pond on April 4. They won their category for the second weekend in a row. Members of the boat include Camila Cardwell (coxswain), Hope Parsons, Grace Vannatta, Emma Carroll, Kirsten Emblom, Tess Moran, Grace Hogan, Cleo Lewis, and Rachel Sedehi.

The T.C. Williams girls’ crew team fought off challenges from a field of tough competitors, as well as high winds, to dominate the second Noxontown Regatta in Middletown, Del., on April 4. The Titan girls’ lightweight 8’s victory against three-time national champion Holy Spirit was just one of many outstanding performances for the day. The Titan boys’ crew team took a break for the weekend to recharge for next week’s competition at the Bull Run Marina.

The Titan girls’ crew team put in a powerful performance during its second appearance at a Noxontown Regatta in two weeks. Conditions at the competition were challenging, with Wilson Everhart III, Head Girls Coach for host St. Andrew’s School, noting that the “brutal, gusting cross-headwinds throughout the day” were “the strongest winds I have experienced on Noxontown Pond in my 10 years of coaching.”

Despite the challenging conditions, the Titan girls took first place in three of the five major girls’ races and took second in a fourth race.

The Titan freshman girls led off the competition with a decisive victory against a tough field of competitors for the second week in a row. The freshman girls raced down the 1,500-meter course in 6:08.5 and beat their nearest rivals, Whitman High School, by 19 seconds.Members of the T.C. girls’ freshman 8 are Camila Cardwell (coxswain), Hope Parsons, Grace Vannatta, Emma Carroll, Kirsten Emblom, Tess Moran, Grace Hogan, Cleo Lewis, and Rachel Sedehi. Titan head girls’ coach Patrick Marquardt guides the freshman 8.

The Titans girls’ third 8 then took up the challenge and sprinted down the course in 6:25.8, winning its race against teams such as St. Andrew’s, Bethesda Chevy Chase, Whitman, and Madison. Members of the third 8 include Paige St. John (coxswain), Fatima Chavez, Ella Benbow, Jessica Mellon, Isabel Montenegro, Priya Vohra, Tess Moran, Tori Cook, and Cecilia Fernandez.

One of the most dramatic moments of the day came in the lightweight category. T.C. Williams family and friends waiting by the finish line were thrilled to see the T.C. girls’ lightweight boat leading the way against rival Holy Spirit as the boats came into view. The Titan girls intensified their assault to maintain their lead against Holy Spirit despite a strong final sprint by this team, which has been the national champion in this category for the past three years. The crowd’s cries of “Go T.C.!” were deafening, as the girls’ lightweight 8 crossed the finish line victorious. The T.C. Lightweight boat finished the race in 5:43.3 seconds, 4 seconds ahead of rival Holy Spirit. Members of the T.C. lightweight boat include Elizabeth Roda (cox), Rachael Vannatta, Olivia Anthony, Sierra Arnold, Abby Prall, Sarah Scroggs, Caroline Hill, Emily De-Bodene, and LeeAnn Richards. The Lightweight 8 is guided by Coach Jaime Rubini.

The brutal wind forced a cancellation of the events for the Titan novice and freshman B boats.

T.C. Williams girls’ head coach Patrick Marquardt said: “The Titan girls are making a strong start this season against some very tough teams. While we still have a lot of work to do, this team has strong potential to do well in the competitions ahead of us.”

The Titan oarsmen and oarswomen will split up on April 11. The Titan girls will return to Delaware one more time for the Noxontown No. 3 regatta, where they will continue to hone their technique against some of the strongest boats on the East Coast. The T.C. boys will go to the Bull Run Marina in Clifton, where they will participate in a scrimmage against Westfield High School.