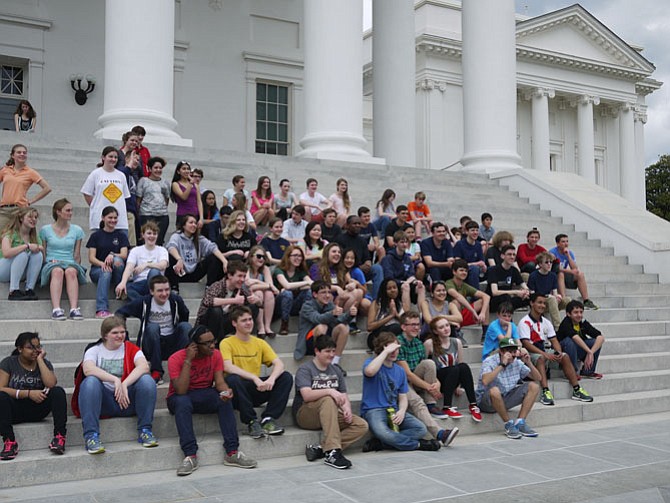 Members of the Yorktown Orchestra and Madrigals visit the State Capitol. Photo by Eden Brown/The Connection

Yorktown High School’s Concert Band, led by Brian Bersh, and Yorktown’s Madrigals, led by Roger Oliver, travelled to Richmond on Friday, April 10, to perform at the Dixie Classic Festival, held at Hanover High School from 4:30 to 9:30 p.m. They left at 7 a.m. from Arlington, and upon arrival in Richmond started band and choir clinics with Dr. Terry Austin and Rebecca Tyree at Virginia Commonwealth University’s Concert and Recital Halls, working on technique until noon.

They toured the State Capitol from 1:30 to 3:30 p.m., and then drove to their event at Hanover High School just outside Richmond. After a quick change into concert attire and warm up, the groups went on stage to be judged by a panel of adjudicators featuring Austin, director of bands at VCU; Thomas Palmatier, conductor emeritus of the U.S. Army Band, Washington, D.C.; Gordon Ring, director of bands, Longwood University; and Jack Winn, former supervisor of music, Chesterfield, Va.

After the students’ performances, they received another clinic as a follow up. Yorktown’s two groups performed three pieces each, and were rated and recorded by the panel. They received “superior” ratings, the highest level, a confirmation of the complexity and quality of their work as assessed by the panel. The students returned to Arlington via King’s Dominion, where the band played several pieces beneath the park’s “Eiffel Tower.”