Ackridge Plans for Residents to Live, Work and Play
Votes

Ackridge Plans for Residents to Live, Work and Play 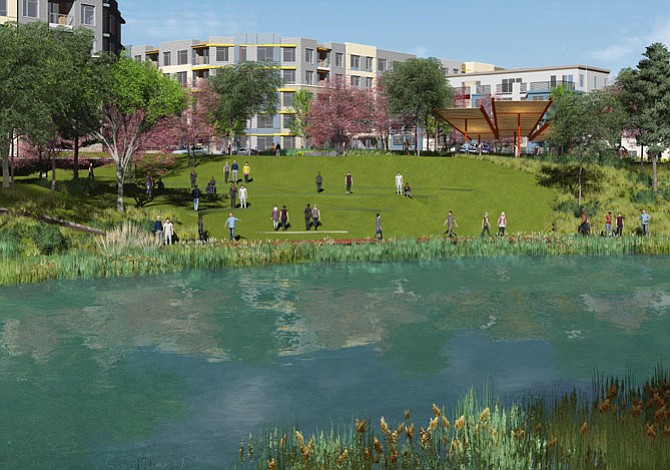 Artist’s rendition showing the view across the pond to the amenity area.

Artist’s rendition of the site entrance on Stonecroft Boulevard.

A plan is afoot to transform 50 acres of vacant land along Route 28 and Stonecroft and Westfields boulevards in Chantilly. Being proposed for what would be called The Preserve at Westfields are 155 townhouses, 650 apartments, plus retail and other amenities.

But first, Fairfax County would have to amend its Comprehensive Plan for that area. Since the plan currently recommends office, hotel and industrial uses there, high-density residential uses would have to be added on paper before any homes could actually be built.

The county Board of Supervisors will hold a June 2 public hearing on the matter. And on March 17, the West Fairfax County Citizens Assn. (WFCCA) Land-Use Committee received information about the proposal residential community.

“If we do this right, we’re ultimately making the Route 28 Corridor stronger by providing amenities and a live, work and play environment,” said attorney Greg Riegle, representing the applicant. “And that’s the philosophy the Westfields Business Owners Association has endorsed.”

By right, he said, 1.2 million square feet of offices could be built on the site. But it wouldn’t make much sense in an area with an already-plummeting office market. Instead, said Riegle, “It’ll be a high-quality living environment with a diversity of housing stock. And some of the multifamily homes could be for empty-nesters interested in downsizing.”

There’ll be an amenity area with walking paths, a pavilion/performing and gathering area, plus a lake that’s currently not accessible. And, said Riegle, “We’ll celebrate the lake and also provide [some 15,000 square feet of] retail amenities, such as restaurants — with opportunities for outdoor dining — to the community at large.”

Akridge owns the land and would build the apartment and retail components; Elm Street Development would construct the townhouses. And although a residential development would yield students, which offices wouldn’t, Riegle stressed that “We’re being asked to contribute millions of dollars to parks, schools, etc. And that money to be spent here doesn’t exist now.”

Planned are wide sidewalks and extensive landscaping, as well as direct access to residential units from the street. Overall, said Riegle, “This could add value to the Westfields area. There’d be contemporary-style buildings and trees everywhere, plus a central open space in the attached-housing area. The townhouses, which would be for-sale, would have rooftop decks and offer low-maintenance living for empty-nesters.”

Regarding the homes’ appearance, At-Large Planning Commissioner Jim Hart, said, “We’ve had other developers promise upscale townhouses and deliver something cheaper.” But Riegle said he needn’t worry because “We have to proffer those architectural details and materials specifically.”

As for traffic, Riegle said having residential uses, instead of offices, would result in a 70-percent reduction in morning rush-hour traffic and a 58-percent decrease during the evening rush-hour. The developer also proposes doing certain transportation improvements.

At Stonecroft Boulevard, there’d be a signalized entrance with dual left-turn lanes and signalized, dual right-turn lanes. And a southbound through lane would be added to Westfields Boulevard.

With a left turn from Stonecroft onto Westfields, said Riegle, “We’d decrease the delay and the queuing length [of waiting cars]. We’d add a second, right-turn lane, and the free-flowing right turn would let those drivers go, without waiting for people turning left or going straight.” Therefore, he said, “There are benefits to having a developer come in and do these things, vs. having [this property] developed by-right with offices.”

However, Ted Moore, on the Sully Station Homeowners Association Board of Directors, was still concerned. “Even if you have two, right-turn lanes, traffic will still back up — and I-66 traffic backs up into Sully Station,” he said. “So until you get rid of the traffic lights at E.C. Lawrence Park and Braddock Road, it won’t change.”

Riegle replied, “This is a start to manage the traffic more creatively.”

Chris Tacinelli, principal with Gorove/Slade transportation planners and engineers, said, “The biggest issue is Route 28, so people are turning right on Stonecroft to get away from it. We’re looking at ways to move the solution forward.”