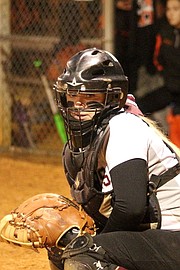 Mount Vernon senior Stormy Zyzyk moved to catcher for the 2015 season after earning all-state honors as an outfielder last year.

“To take an all-state outfielder and move her to a new position for her final year of high school is never ‘Plan A,’ but it had to become ‘Plan A’ after a few weeks of observation.” 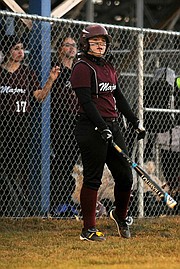 Stormy Zyzyk and the Mount Vernon softball team have won five straight after starting the season 0-3.

But as the Majors’ first scrimmage in mid-March approached, it was obvious to Zyzyk that the team had a flaw capable of hindering what could be an otherwise successful year.

Zyzyk, who has also pitched for Mount Vernon, felt the lack of a seasoned catcher on the roster was affecting Anderson’s confidence in the circle. Having already signed to play college softball at Towson University, Zyzyk felt her senior season was more about helping the team than proving her individual talents.

So No. 5 approached head coach Dan Coast with the idea of moving from center field to catcher.

“Being a pitcher, I know it can be difficult to stay under control and have confidence while you're on the mound if your catcher isn't up to par,” Zyzyk wrote in an email. “So I could see [Anderson] getting a little down on herself or even holding back due to us really lacking in a catcher. So I thought it'd be the best option and could really help out our team. I also saw it as an opportunity to challenge myself and grow as I have nothing to lose really and I already know where I'm going to college. I guess you could say I was just concerned. It's not that the players who we were trying to convert to catchers couldn't get the job done, it's just they didn't really have the knowledge of the game compared to me because I've been playing for so long.

“The main thing that made me decide to volunteer is that it's the job of the catcher to make the pitcher look good and I felt I would be best suitable for that, even though Susannah does a great job of that on her own.”

Coast didn’t like the idea at first, but realized it was the Majors’ best option.

“To take an all-state outfielder and move her to a new position for her final year of high school is never ‘Plan A,’” Coast said, “but it had to become ‘Plan A’ after a few weeks of observation.”

While Zyzyk is a talented and successful softball player, she had minimal experience behind the plate and had never caught an entire game. She is also left-handed, a rarity for catchers, meaning she would quickly need to locate a new glove with the season fast approaching.

“The glove was the first thing my coach asked me about because my outfielder’s glove was not going to cut it,” Zyzyk wrote. “My parents and I researched some first-baseman gloves because they're easier to find in stores and we needed one right away. We were able to find a well-broken-in one at a local Dick's Sporting Goods and I had one within days after making the decision to move to catcher.

“Playing catcher is a completely different aspect than center field. You're directing the complete game from behind the plate. I'm used to being loud and authoritative in center field, so that wasn't hard, but making split decisions in the field, calling where the ball needs to go is still something I'm getting used to.”

After getting the OK from her future Towson coaches, Zyzyk transitioned to catcher and opened the season behind the plate against West Potomac on March 18.

Coast said it’s the first time in his coaching career that he’s had a left-handed catcher. Zyzyk is still improving behind the plate, but her athletic ability and strong arm have helped limit the damage done by opposing baserunners.

“Susannah is a very skilled pitcher,” Coast said. “She is a freshman but she throws like a senior with a whole lot of talent. For her, it’s critical she has someone who can handle her pitching. Anytime you have a pitcher who doesn’t have confidence in her catcher, it affects her performance.

“Susannah is fortunate to have Stormy back there.”

“I think things are jelling extremely well,” Coast said. “… Susannah has had three shutouts and allowed four runs in the last five games.”

Zyzyk said the transition has been challenging, but not as difficult as she expected.

“I'm using different muscles but my body has gotten used to it now ... and I definitely feel it after a game,” Zyzyk wrote. “I also get tired a lot easier and I really have to push myself to keep giving 110 percent and staying completely focused.”

Fatigue hasn’t stopped Zyzyk from producing at the plate. The senior is batting .423 with three doubles, three triples and six RBIs.

Mount Vernon (5-3) will host Edison at 6 p.m. on Friday, April 17. The Majors will host defending conference champion Marshall on May 5.

Zyzyk’s willingness to move to catcher “speaks highly of her,” Coast said.