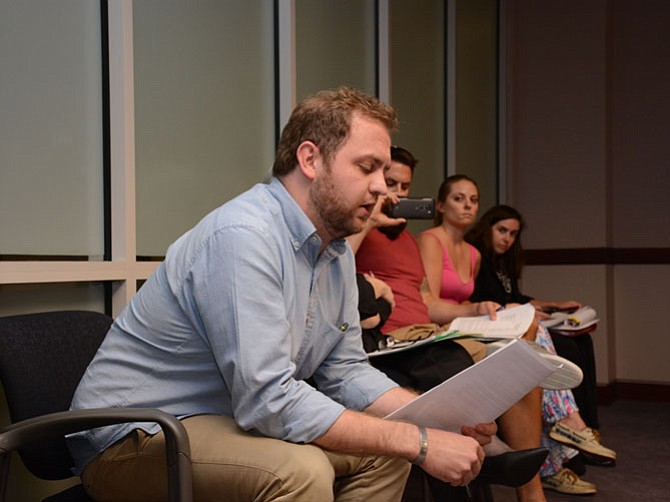 Alex Horton (center) of the Huntington area of Alexandria, reads his latest statement at the Aug. 12 Use of Force subcommittee of the ad hoc police policies review commission, calling for a continued “constructive dialogue” about police accountability, professionalism and transparency. Photo by Tim Peterson.

Alex Horton waited patiently for his chance to speak. Meanwhile the Use of Force subcommittee of the Fairfax County ad hoc commission to review police policies and procedures waded through the results of a survey to determine the content and language of policy change recommendations it will eventually bring to the full commission.

Once it was time for public comment, Horton pulled out a prepared statement and proceeded to read from it while seated outside the ring of subcommittee members.

On the morning of June 14, Horton was asleep in a model apartment in his building in the Huntington area of Alexandria. He had been staying there briefly while repairs were taking place in his own unit. Upon seeing the door to the apartment ajar, a dentist with an office across the hall called Fairfax County Police and reported a vagrant in the building.

Police gained access to the building and unit, and reportedly announced themselves repeatedly. Hearing no response, they entered and performed a sweep of the room, brandishing their service weapons. In a July letter published in The Washington Post, Horton describes waking up in shock while this was taking place.

The letter goes on to explain no shots were fired and the situation de-escalated after Horton produced proof that he lived in the building.

Horton came to the subcommittee meeting not as much to complain about the officers’ tactics specifically, but rather his experience with the police department afterwards. An Iraq war veteran, Horton said he understood the process officers used to sweep the room.

“My chief complaint,” Horton said, “is how the officers failed to reasonably exhaust all opportunities to gather information before raiding the bedroom with guns drawn and leveled at me.”

Following Horton’s letter in the newspaper, Fairfax County Chief of Police Edwin Roessler announced an investigation of the matter would take place. Aug. 7, the chief released recordings of the 9-1-1 call and dispatch call, as well as a five-page response letter to Horton, to the public.

At Horton’s request, the two met in person to discuss his concerns.

“I felt it was helpful and constructive,” Horton said.

In addition to the case, Roessler said the two had “a good, healthy discussion about philosophical issues with policing in the national dialogue. He made good points about the profession, I wanted to get his input.”

In his statement at the meeting, Horton said the chief justified the officers’ procedures because they were executed by the book. “Whether the book itself needs rewriting is a question I hope Chief Roessler and other leaders will answer in the coming weeks and months,” said Horton.

Horton was also critical that the chief’s summary in the letter to him said officers tried but were unsuccessful in obtaining information from the security guard at the apartment complex.

“A representative from the security company told me precisely the opposite of what was found in the report,” Horton said, “The officers only asked the guard which building the 9-1-1 caller had identified and they went in. That’s it, no questions, no fact-gathering.”

Horton played recordings he’d made of conversations with the security guard who encountered the police, as well as a police supervisor with knowledge of the incident. That supervisor asserted the officers didn’t do anything wrong by not gathering more information.

Horton’s next major complaint was with statements made by Fairfax County Police Internal Affairs commander Maj. Michael Kline, who attended the previous subcommittee meeting and spoke about how the incident transpired and the ensuing investigation.

During his explanation (which is available on YouTube at https://www.youtube.com/watch?v=k82WIL9Uvo4), Kline walks the subcommittee members through the mentality of the officers who responded to the vagrancy call.

Whether they’re homeless just looking for a place to stay the night, drug addicts strung out, a fugitive, someone who is mentally ill, “these things are in the back of the mind of the patrol officer as he’s prepared to make that entry.”

Kline said the officers knocked and announced themselves, standard procedure, and hearing no response, entered the room with a mindset that the person inside might be trying to barricade themselves or set up an ambush.

“It can be pretty well inferred, our investigation indicates, that he had spent the night before drinking rather heavily,” Kline said. “He didn’t hear the knock and announce because he was still in bed and asleep when we went in.”

“This is untrue and pure conjecture,” Horton responded. “By all accounts, the officers said I was cooperative and compliant, and nothing would have indicated I was inebriated.

“Whether consciously or not,” Horton continued, “he seized on the harmful trope of the damaged, drunk and disheveled war veteran that my community has sought to amend in the wake of Vietnam.”

Horton went on to say he shared this complaint with Roessler as well. Roessler confirmed that the matter is a “personnel issue, under inquiry by me.”

Though Kline was in the room for the Aug. 12 meeting, he didn’t immediately respond to Horton’s statement.