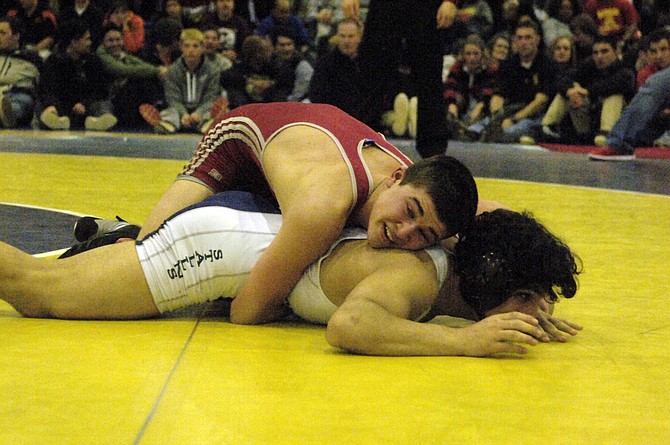 Disappointed with his performances at the 2013 and 2014 state tournaments, Grammes approached the 2015 competition with a cool confidence. After a grueling victory in the semifinals, Grammes captured what he came for.

“It feels pretty good to be honest,” said Grammes, who also won Conference 6 and 6A North region titles in 2015. “Both of the last two years [were] kind of upsetting at states --- I struggled a little bit. ... Going in my freshman and sophomore year, I was really nervous. I didn’t really focus as much on warming up properly because I was nervous.

“This state tournament, I went in confident, thinking that I deserved to be a state champion and it made it a big difference in the way I wrestled.”

Grammes earned a trip to the 152-pound final by defeating Herndon’s Samuel Milligan in the semifinals, 6-3.

“In my mind, that was my finals match,” Grammes said. “I knew that was going to be a real grind-out. Me and Sam, we’ve been wrestling together since we were in first grade. ... I was gassed [toward the end of the match]. I had no energy left. It was straight who wanted it more.”

McLean finished seventh in the team standings with a score of 32. Colonial Forge dominated the competition, winning the team title with a score of 147. Centreville finished runner-up (57.5), followed by Robinson (51), Westfield (48), Battlefield (47) and Oscar Smith (37.5).

Due to inclement weather concerns, the VHSL condensed the two-day event into a one-day tournament. Friday’s competition lasted past midnight.