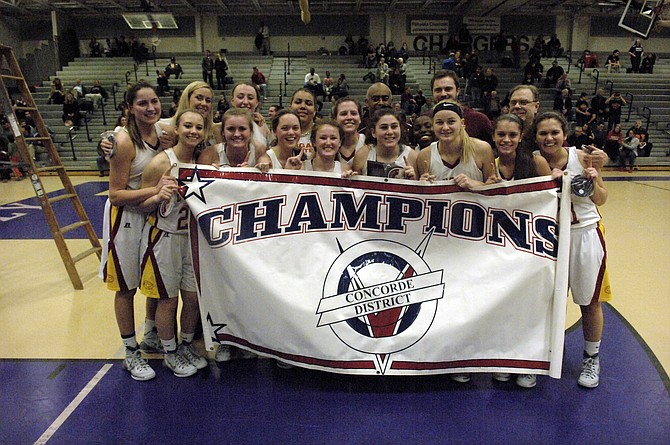 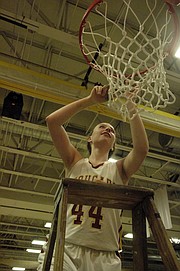 Oakton sophomore Delaney Connolly cuts off a piece of the net in celebration of the Cougars winning the Conference 5 championship on Monday night at Chantilly High School. Oakton defeated Chantilly 64-51.

After Oakton girls’ basketball coach Fred Priester celebrated his 16th conference/district championship in 21 years with the Cougars by cutting down one of the nets at Chantilly High School, the Conference 5 Coach of the Year made his way down the ladder and answered a reporter’s question.

Does winning conference championships get old?

“They never do get old, especially now that the VHSL has discombobulated everything else,” Priester said. “The one thing you feel like you can count on is the conference, the district. Winning a conference or a district championship is never going to get old.”

Things have changed in recent years in the world of Virginia High School League athletics. The Cougars play in Group 6A rather than AAA, and the Concorde District is now referred to as Conference 5. However, one thing that remains consistent is the Priester-led Oakton girls’ basketball program experiencing success.

Oakton led by 13 points in Monday's second quarter, but Chantilly started to chip away and pulled within six when Simone Jeffries’ bucket cut the Cougar lead to 31-25 with 5:40 remaining in the third. Oakton responded with 14-4 run, building the lead to 16.

Chantilly made a final push, cutting the Oakton lead to six at 48-42 with less than 5 minutes remaining in the fourth quarter, but the Cougars responded with buckets by Lindsey Abed and Maddie Royle to maintain control.

“When they went on their run,” Abed said, “we all had to come together as a team and remain focused and that’s what we did.”

“They play fantastic with each other, especially the high-low action,” senior guard Abed said about the sophomore duo. “They do very well.”

Abed, the Conference 5 Player of the Year, scored 17 points.

Oakton’s Connelly and Royle earned second-team honors, and senior guard Karlie Cronin, who missed most of the regular season with a knee injury, received third-team recognition.

Abed was also named Defensive Player of the Year.