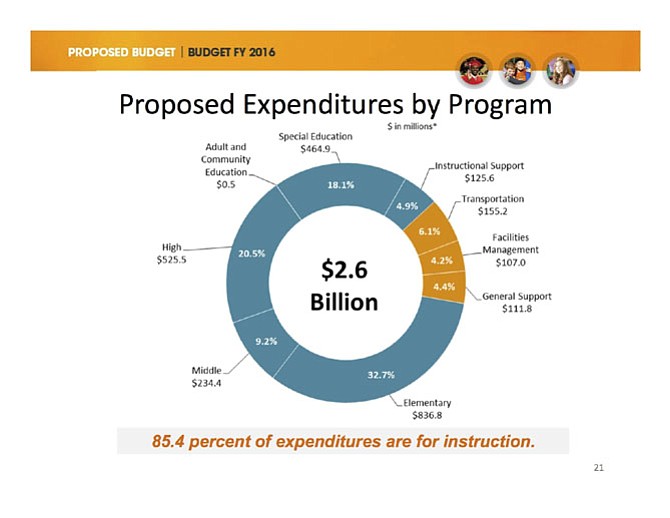 A slide from Superintendent Dr. Karen Garza’s $2.4 billion budget proposal at the Jan. 8 School Board meeting.

“We are great because we have great people,” said Garza at the School Board meeting Jan. 8. “Compensation is a priority, and it’s reflected in the budget I’m presenting to you tonight.”

She said that the non-competitive compensation offered to teachers makes some look elsewhere like Alexandria City Schools or Arlington Public Schools.

$39.7 million will be used for step increases for teachers. More than 80 percent of the budget is going towards instruction, however, with $18.6 million being added due to the expected enrollment increase. Enrollment is expected to reach 188,106 next school year.

The budget is $64 million - 2.6 percent increase - from the current year’s budget. Even so, there have been $55.4 million in reductions with more planned for fiscal year 2017.

None of next year’s budget included staff cuts according to Garza. However, at this time next year, she said the School Board can expect a deficit of $100 million.

“It’s my opinion that we have nothing left to cut,” she said, adding that the school system has cut a total of $435 million since 2008.

She was also concerned that there would be no room for innovation in the upcoming strategic plan due to the lack of school funds.

“We urge our county Board of Supervisors to fully fund this request,” she said.

Dranesville District School Board member Jane Strauss recalled Board of Supervisors Chairman Sharon Bulova stating at a previous meeting about the importance of funding education.

“Paying our teachers has got to be the number one priority in this budget,” Strauss said. “We cannot afford to continue to sink.”

Student Representative Harris LaTeef, Langley High School senior, was pleased there were no staff cuts for the upcoming year.

“Cutting positions when Fairfax County Public Schools is experiencing record student enrollment growth would be counterproductive and I'm glad this has been avoided,” he said. “However, the true way we can avoid cuts that could detrimentally impact our school system is greater funding from the Board of Supervisors. The 10th largest school district in the United States needs to be fully funded.”

Mount Vernon District board member Dan Storck agreed that more funding is needed from the county, but added that an additional stream of revenue may be necessary if the state funding continues to be inadequate.

“I hear all the time that we cannot continue on the path that we’re on, and I know we do recognize that,” he said.