Coming Home to Queen of Peace in Springfield
Votes

Coming Home to Queen of Peace in Springfield 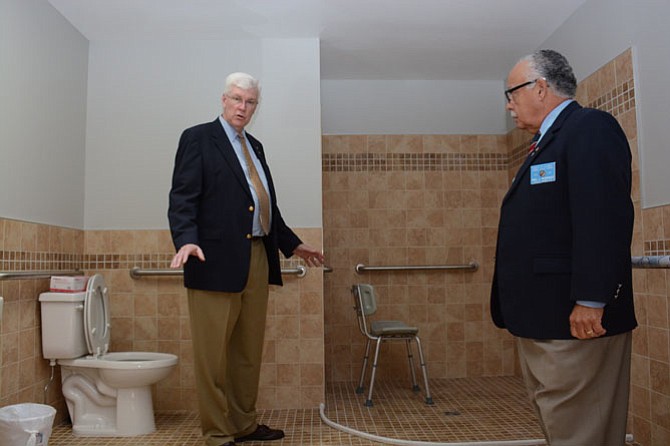 Marian Homes director William C Baker (left) and District 14 Warden for the Knights of Columbus Fidel Rodriguez tour one of the fully transformed bathrooms in the Queen of Peace house. Photo by Tim Peterson.

Marian Homes volunteers from Fairfax (from left) — Walter Purdy, Michael Perri and John Germain — work on converting a north Springfield home to make it accessible for people with intellectual disabilities.

Ten months ago, the unassuming single-level house on Gresham Street in north Springfield was a private residence. Today it’s the permanent home of four individuals with disabilities, and a fifth is on the way.

There are 71 group homes like and including this one in Fairfax County, affording 316 people the opportunity to receive support and care services in a community-integrated setting. This model is in contrast to the aging state-run model for housing people with mental and physical disabilities in large, centralized “training centers” scattered around the state.

Claiming these centers were isolating people from having more normal, integrated lives, the state mandated residents be moved to smaller community-based centers.

The Northern Virginia Training Center located on Braddock Road is one of the large, older centers. It still has fewer than 70 residents in the process of being discharged to meet a March 2016 scheduled closing. Of the remaining residents 37 are from the Fairfax-Falls Church area.

The rear area of the house was added by previous owner Larry Ichter in 1989.

Those individuals being discharged compete with thousands of people currently on the county’s waiting list for disabilities services and supportive housing, which is managed by the Fairfax-Falls Church Community Services Board.

The group homes are a favorable option in Fairfax County, according to Community Services Board assistant deputy director Jean Hartman, along with two other alternatives: 37 apartment projects that each house two to three people and six Intermediate Care Facilities that can take as many as 12 individuals.

But together those options only house 423 individuals. The county’s list has more than 7,000 on it who are waiting for either support services, housing or both.

“The impact of the state’s decision to close training centers really just amplified what was already a preexisting need for housing,” said Hartman, who referred to the high cost of living in Fairfax County compared to other parts of the state where people with disabilities have been discharged from other training centers.

MARIAN HOMES is a nonprofit organization linked to Fairfax Station-based Knights of Columbus St. Mary of Sorrows Council 8600 that was set up to help people with disabilities find supportive housing. The council is made up of 535 members.

Including this newest structure, Marian Homes owns three group homes in Northern Virginia, specially retrofitted to be more accommodating for residents like those leaving the training centers. The first one for five women in the Brecon Ridge subdivision of Fairfax was dedicated in 1998 and a second for five men in the Fairfax subdivision of Greenbriar was purchased in 2010. All of the first 10 residents came from Northern Virginia Training Center.

To operate the homes and provide round-the-clock support for the residents, Marian Homes has partnered with Chimes of Virginia, the local base of large Baltimore-based Chimes Foundation of care providers.

On June 25, Marian Homes held the grand opening of its third house, located on Gresham Street in north Springfield. In this instance, the group used deferred-loan funding it was awarded from the Fairfax County Redevelopment and Housing Authority to cover the $510,000 mortgage.

Marian Homes volunteers started the demolition and reconstruction in late February this year, and spent another $103,000 to have contractors finish transforming the interior from a three bedroom single-family unit to a five-bedroom dwelling where each of the residents can receive the support and care they need. 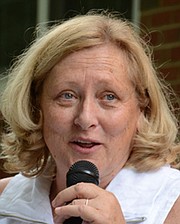 “It’s better for them to live with other individuals,” said Chimes chief operating officer Nancy Eisele. “In larger settings it gets lonely, there are limitations on social skills and communication. I think this model does work well for a number of people, with the right combination, who can really get along in a congregate setting.”

FAIRFAX RESIDENT JOHN GERMAIN is on the board of Marian Homes and designed the house’s custom interior that required a complete teardown and rebuild.

“I’m elated,” Germain said while looking around the sparkling new floorboards and generously wide hallways. “I’m happy to see the residents -- I’m so joyful for them to have a place they can call home.”

Phil Torrey of Fairfax Station is the Marian Homes treasurer and was on one of the demolition teams. “I helped take out that wall with a sledgehammer,” he said. “It looks a lot different now. It’s really nice.”

Construction was completed in just 75 days, at the end of May. The first four residents moved in on June 15.

Renovations included converting the house from three bedrooms to five, adding a walkout entry, all-new flooring, building out the bathrooms to accommodate wheelchairs and a hoist mechanism and completely remodeling the kitchen. There are plans to add an electronic lift up to the side entrance of the house. 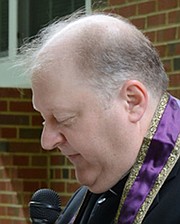 “It’s been 10 months from getting the property to today,” said Marian Homes president William Crowder. “It’s really been a rocket ride for all of us.”

The grand opening ceremony brought together local elected officials, Nancy Eisele and Rev. James Barkett, pastor of Saint Mary of Sorrows Catholic Church in Fairfax, who blessed the house and gave it the name “Queen of Peace.”

“This is what government should be doing, supporting organizations like this,” said Del. Tim Hugo (R-40). Hugo then presented Marian Homes president William Crowder with a state of Virginia flag that had been flown over the capitol in Richmond.

Cook said the house is an example of what can happen when different organizations and government work together. It wouldn’t have been done nearly as quickly, he said, “certainly if you waited for county government.”

“We worked through government partnerships,” Cook added. “That’s why this works so well. There’s a need for more group homes. Don’t stop at four -- we’re looking for five or six to come out.”

Jim McHugh of Fairfax is the deputy Grand Knight for the Knights of Columbus Council 8600. “Our main principle is charity and our big event is Marian Homes,” he said. “I’m proud, excited for the opportunity to help another life, give five more people a place to call home.”

Dick LaFrance is known as the “guiding force” behind starting Marian Homes. “It’s overwhelming,” he said, looking at the house, referring to it as “the promise of what we had in mind 20 years ago.”

The new residents of the house on Gresham Street in north Springfield are in the process of moving in and making it their permanent home.

Mike Lukacs used his experience as a realtor to find the Queen of Peace home. Finding a house that is suitable for this type of conversion isn’t easy. “For five bedrooms, single-level in Fairfax County, it’s just not out there,” he said.

But Lukacs is searching for the next Marian Home anyway. In fact, over the weekend following the Queen of Peace grand opening, he and John Germain were scheduled to look at potential homes for the next project.

Germain said the county has already invited them to bid on the next Request for Proposals that comes out in October.

With more people still in the process of being discharged from the Northern Virginia Training Center and thousands more on the waitlist for housing and services through the Fairfax-Falls Church Community Service Board, the county could use more than a few more houses like the Queen of Peace.

“Let’s get another five people in,” said Germain.

To find out more about Marian Homes, visit www.marianhomes.org.