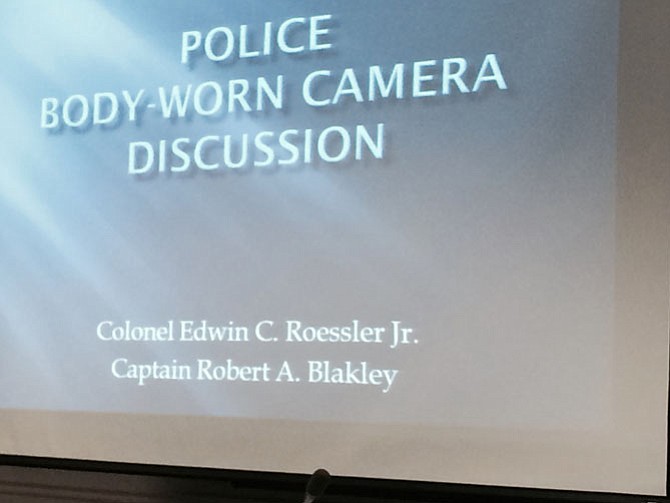 The Fairfax County Board of Supervisors Public Safety Committee, chaired by Gerry Hyland (D-Mount Vernon), met on Tuesday, June 9 for the first time since June 2011. Since then, there have been six officer-involved shootings in Fairfax County, including the August 2013 shooting death of John Geer. Police handling of the communications and investigation of that shooting led to the formation in March 2015 of the Ad Hoc Police Practices Review Commission.

All 10 members of the Board of Supervisors were in attendance, including Penny Gross, who excused herself after about 75 minutes saying: “I’m a little preoccupied today,” to laughter. Gross (D-Mason) faced the first primary election challenge of her career, winning with 56 percent of the vote over challenger Jessica Swanson.

In a discussion of FCPD proposal to implement body cameras for all patrol officers Police Chief Edwin Roessler described cameras as “another step to total accountability.” Cameras “capture officer’s actions whether they are good or bad … technology to hold ourselves accountable,” he said,

But the draft policy and procedures accompanying Capt. Robert Blakely’s presentation did not list transparency or accountability among the purposes of the body cameras.

Purposes listed included: to capture criminal events and provide evidence of those events in court; to document crime scenes; to document victim, witness and suspect statements; to act as a deterrent for purposes of officer safety; to reduce unreasonable and/or false complaints against officers; to provide training and “performance mechanism to ensure the professionalism of all officers.”

Cost estimates were $4 million for startup and acquisition with ongoing operating costs of $4 million a year. Estimating that cameras could capture an hour of video for each 8-hour shift for each officer, Blakely pointed to the need for massive data storage of more than two petabytes of data annually. That’s more than 20,000 terabytes. Costs include the addition of eight-to-10 positions including a redaction specialist and three Freedom of Information clerks. And three “might not be enough,” Blakely said.

Some jurisdictions “had to take action to block certain aspects of FOIA because the demands were so high,” Blakely said. Not all video would be subject to all the provisions of FOIA, he said.

Roessler told the cautionary tale of the early days of dashboard cameras in patrol cars which included VHS tapes, complicated chain of custody issues and a suspension of the program while the technology matured.

“The moral to this is, ‘Nothing is simple,’” said Chairman Sharon Bulova. “This is complicated.”

Michael Hershman, chairman of the Ad Hoc Police Practices Review Commission reported to the committee that the commission is undertaking a large scope of work in a short time frame, using five subcommittees: Use of Force; Communications; Mental Health; Investigations and Oversight; and Recruitment and Vetting. There are 35 members of the commission, plus an additional 25 members of subcommittees.

In addition to reviewing internal policies and data, the commission is looking at other localities, reading independent reports, and reviewing best practices.

“We’re trying to do a better job of being transparent and sharing information,” said Bulova.

“We have a commitment to finish and give you recommendations in October, and we will be doing that,” Hershman said.

It’s a complex, emotional topic, and there are differences of opinion among members of the commission, he said. But “the disagreements we’ve had have been very civil.”

Supervisors pressed Hershman to hold additional public forums in other parts of the county, including Mount Vernon, Reston and Culmore.

“This is a large county, this is a long-term issue,” said Cathy Hudgins (D-Hunter Mill). “I would like to know that we are going to put it to bed as best we can with new policies and procedures.”

Hershman responded: “Let me say this about putting this to bed once and for all ...

it’s healthy to review the state of policing every several years. It’s a never-ending process.”

Gross asked whether Hershman was comfortable with diversity on the commission.

“We weren’t satisfied with the diversity … of the commission,” Hershman answered. “No, I’m not comfortable. But we have worked very, very hard, and we’re not stopping, at every turn we reach out.”

John Cook (R-Braddock) cited recent statistics indicating that at least 25 percent of people shot by police in the U.S. were people with mental illness: “I want to make sure that we are looking at that issue as a national phenomenon.”

All meetings of the Police Commission and subcommittees are open to the public, and the documents and data gathered by the commission are available online. See http://www.fairfaxcounty.gov/policecommission/ for schedule and materials.

The committee heard about police department goals to train 100 percent of its officers in crisis intervention, and efforts to reduce the number of people with mental illness in jails.

The new Community Services Board facility, the Merrifield Center, was built to accommodate a 24-hour drop-off for people with mental illness instead of having police take them to jail, but more money and resources will be needed to implement that, said. Tisha Deegah, executive director of the Fairfax-Falls Church Community Services Board.

Cook pointed to an 80 percent recidivism rate for people with mental illness who were incarcerated, vs. a 20 percent rate with diversion to treatment, and the economic cost associated with that.

Hudgins expressed frustration that the same goals were in place for mental health reform in 2007, but the resources have not accompanied the goals. “We actually substituted the jail for mental health services,” she said.

Rohrer said that the resource shortage wasn’t just on the part of county funding, but also state funding and choices made by hospitals to close beds that could serve people with mental illness in crisis. Many nights every week, for example, officers are dispatched to deliver as far as Salem or Norfolk where a bed is available for treatment, tapping critical police resources, but also putting the person in crisis and that person’s family in greater difficulty, Rohrer said.

POLICE & FIRE GAMES opening ceremonies for the nearly 10,000 registered athletes from around the world, are about two weeks away, and organizers appeared before the committee with enthusiasm and a small amount of trepidation. Opening ceremonies will be Friday, June 26, at RFK stadium, including lighting of a cauldron and a flyover. Tickets to the opening ceremonies are free, available at http://fairfax2015.com.

Athlete’s Village, the social hub for the games, will be in Reston, with major venues around the county.

The public can attend any of the 1,600 medal events in more than 60 sports at more than 50 venues for free, no tickets required. See http://fairfax2015.com/schedule

More than 5,800 volunteers have signed up to fill some of the 18,000 shifts, said Bill Knight, executive director of Fairfax 2015. There are more than 930 medical volunteers.

Closing ceremonies will be at Wolf Trap, Sunday, July 5.

The committee also heard plans to develop legislation on animal cruelty that would include regulations on dog tethering. Currently the county can enforce state laws.

Disclosure: Mary Kimm is a member of the Ad Hoc Police Practices Commission.