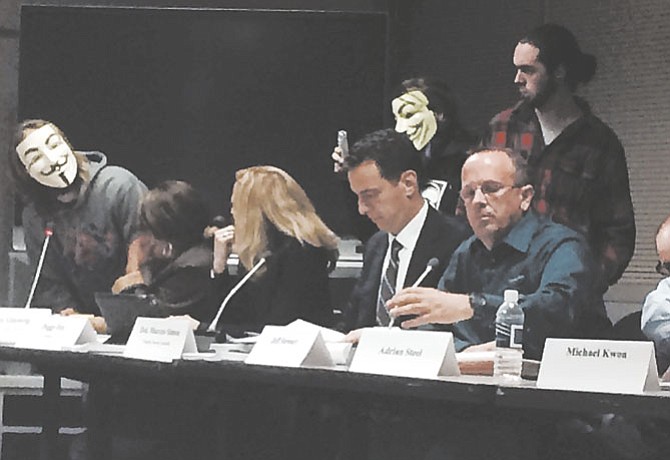 Their faces were veiled by the iconic pale plastic and long, up-curved mustache made popular by the movie “V for Vendetta.” The men had been protesting with the Facebook group Justice for John Geer prior to the meeting.

When given the chance to speak, they asked questions about police use of tear gas and pepper spray, and the difference between police officers and citizens with regards to the amount of time allowed after being involved in a shooting before giving a statement. One man also asked questions directly referencing the killing of John Geer, which were turned down due to the ongoing investigations into that case.

The masked men left the room once they had asked their questions, but were stopped on their way out by commission chairman Michael Hershman, who said he respected their rights to demonstrate as they did and thanked them for participating peacefully.

Though he reminded the commission discussion of the Geer case details are off the table while investigations are still underway, he said, “This is not the last bite of this apple.”

Adam Buchanan of Springfield protests outside the Fairfax County Government Center with the Facebook group Justice for John Geer.

Flanagan, whose department deals with cold cases, officer-involved shootings and in-custody deaths, walked through his typical progression following an officer-involved shooting. This includes responding directly to the scene, conducting interviews of witnesses, returning to the scene with the officer and interviews with the officer after a day or so have passed.

“At the end of the day I have to be right,” Flanagan said, commenting on adhering to administrative policies. “These take a long time.”

Morrogh explained a bit about his role as a prosecutor of criminal, rather than civil, cases and addressed the issues of transparency that were a main focus in the formation of the Ad Hoc Commission.

On transparency, he said, “We’re seeing the same questions around the country. I would turn over all reports as soon as I get it but it would be unethical to disclose information pretrial to the public.”

Similar to Flanagan, Blakely described the course of events following an officer-involved shooting from the police perspective of Fairfax County Police Internal Affairs.

After the presentations, members of the commission and the public in attendance were able to ask questions of the three speakers.

Commissioner Peggy Fox of news channel WUSA9 asked if the men were in favor of dashboard cameras in police cruisers and body cameras on officers.

They were responses were in favor, including Morrogh, who said if a picture is worth a thousand words, “a video speaks ten-thousand.”

Connection Newspapers editor and publisher Mary Kimm followed that by asking Morrogh when the public would get to see the dashboard camera footage of the 2009 police shooting of David Masters.

Morrogh responded that he had no problem with the public seeing the video. He also confirmed recent media reports that he has decided to convene a special grand jury to review evidence in the killing of John Geer.

Emotions bubbled over when commissioner Nicholas Beltrante asked Morrogh why it had taken 18 months since Geer’s death to draw a grand jury. Morrogh remarked about letters he has received from Beltrante and commented negatively on the commissioner’s age before Hershman moved the meeting along.

Morrogh said that regarding information related to the Geer case, “I’d love to tell, I really would, but I’m not going to do it.”

The commission was formed after public criticism of how Fairfax County police and government officials handled the release of information regarding that incident. Kimm alluded to this when she commented the evening’s presentations about administrative policies “don’t add up to events that brought us here.”

Board of Supervisors chairman Sharon Bulova, who formed the commission and brought it before the supervisors for endorsement in March, said that one could write “a paper on things that went wrong” in that situation.

Bulova listed the delayed sharing of information, the wrongful death civil lawsuit between the Geer family and Fairfax County and the Internal Affairs investigation into the incident. “It’s been such a long time,” she said.

ADDITIONAL BUSINESS of the meeting included announcing the formation of themed subcommittees that will more closely examine Police Use of Force, Communications, Mental Health and Crisis Intervention Training, Police Recruitment and Vetting, and Independent Oversight and Investigations.

Shirley Ginwright, chairman of the Communities of Trust Committee, president of the Fairfax County NAACP and chairman of the commission’s recruitment and vetting subcommittee, spoke to the need for more diversity on the subcommittees than exists on the commission, as additional citizens are allowed to be selected to participate at that level. “It’s supposed to be inclusive of members of the community,” she said.

The next meeting of the commission will be a public forum, held Monday, May 18 at 7:30 p.m. at the Fairfax County Government Center.

Documents from the meeting, information on upcoming meetings and lists of commission and subcommittee members can be found online at www.fairfaxcounty.gov/policecommission. Fairfax County video from the April 27 meeting is set to be online soon.