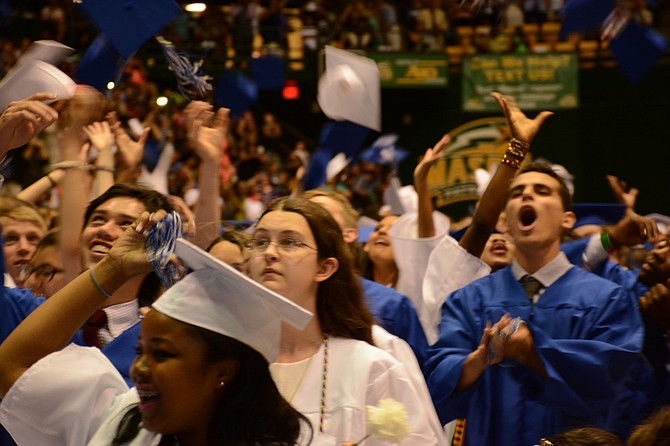 West Potomac seniors celebrate after being proclaimed graduates in the June 18 ceremony. Photo by Tim Peterson.

“It really resonates with me and holds a weird place in my heart,” the West Potomac High School class of 2015 president said during her graduation remarks to fellow wolverines. “Everyone wants to see everyone else succeed. That’s what I think I’ll miss the most about West Potomac. Hashtag blessed.”

Graduate speaker Alexis Nobrega delivered the message of standing out and being unafraid to be who you are. “When we were young,” she said, “we all thought if we didn’t fit in, we didn’t stand a chance.”

Standing out, Nobrega said, “can lead to the greatest award. Believe in yourselves; you’ve already made it this far.”

First-year principal Alex Case praised the class of 2015 for being “engaged, focused, inquisitive and dedicated.”

Case was particularly proud of the class’ dedication to the local community: As a group, he said, they put in 9,000 hours of community service in the two weeks leading up to graduation. That makes around 27,000 hours as a class over the last four years, Case continued.

The principal threw out another statistic, that together the class of 2015 had taken around 6,000 standardized tests. And though they were successful through those examinations, Case said it’s important to remember “life seldom comes with answer choices A, B, C or D.”