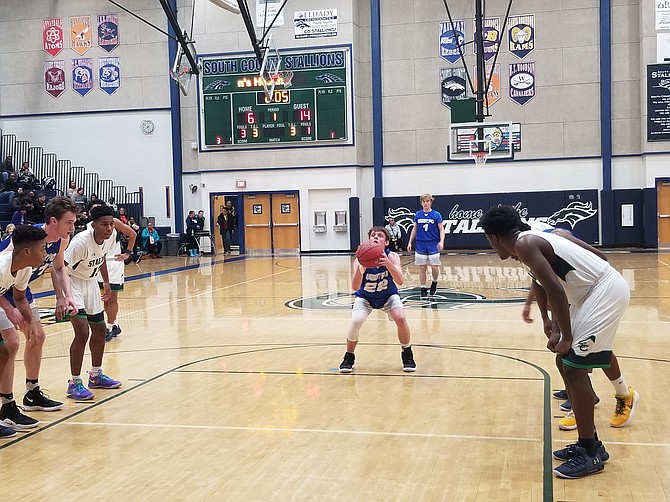 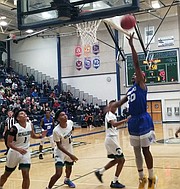 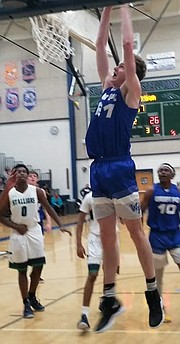 West Potomac senior Jonas Munson goes up for a dunk against South County.

Friday night started as an opportunity for the undefeated West Potomac boys’ basketball team to further prove its potency as the Wolverines traveled to Lorton to take on defending state champion South County.

The evening ended with a blown 13-point lead, an overtime loss and a bag of ice on the right ankle of West Potomac’s best player.

There was, however, a silver lining — even if the Wolverines had to fight through frustration to see it.

After losing a 13-point lead, West Potomac forced overtime with an Ethan Payne 3-pointer late in regulation. But with standout guard Daryl Mackey, Jr. on the bench after suffering an ankle injury, the Wolverines managed just one point in the extra period and fell to South County, 61-59.

The Wolverines entered the game down two starters — point guard Bradley Harden was injured and forward Shannon Harrigan, per VHSL rule, was forced to sit out after receiving two technical fouls in West Potomac’s previous game. Despite not being at full strength, the Wolverines jumped out to a 9-0 lead — thanks to seven straight points from Jonas Munson — and led 43-30 midway through the third quarter after a Mackey bucket.

South County then chipped away at the lead, thanks primarily to the play of Donovan Myles and Andre Speight. The Stallions eventually took the lead late in the fourth quarter before winning in overtime.

“The kids fought really hard,” head coach David Houston III said. “We wanted to win the game with the guys that we had. We thought we could win the game with the guys we had, with the effort they put forth. … I think we had a lot of guys get a chance to play that are … back-up guys in this playoff-type atmosphere, and you can’t really ask for anything better than that for them to have an opportunity to make some plays.”

Mackey suffered a right ankle injury in the second half, when he landed awkwardly near the baseline.

“It felt weird,” Mackey said, “because I had to click it back in to place.”

Mackey continued to play, but Houston took him out of the game late in the fourth quarter. Mackey finished with a game-high 20 points, despite not playing in the overtime period.

“I just saw [Mackey] and he didn’t look like it was getting better and I didn’t want to get it worse this early in the year,” Houston said. “… We’ve got months to go. We wanted to win the game, he could have helped us win the game but his health is a little more important than that.”

After the game, Houston and his players were disappointed they didn’t come out with the win, but the Wolverines put forth a performance to build on.

“We’re mad about it,” junior Jack Fricka said. “We’re hungry. We know we’re a hard team (to beat) regardless of who is playing and who is not. We have kind of embraced the next-man-up mentality on this team. … We’ll take it as a learning experience and move on.”

Munson finished with 15 points for West Potomac. The 7-foot Central Arkansas signee showed off his versatility, throwing down a dunk and knocking down a 3-pointer.

Payne scored nine points for the Wolverines, knocking down a trio of 3-pointers, and Fricka added eight.

West Potomac won’t play again until a Dec. 27 holiday tournament contest in Charlottesville, giving Mackey’s ankle some time to heal. The Wolverines will enter the tournament with a 5-1 record.

“I think we’re good, [South County is] good,” Houston said. “They were at home, they did what they were supposed to do against a wounded team. We’ll see them probably somewhere in February.”

It wasn’t all bad news for the Wolverines. After the game, Houston informed Mackey that the senior guard received an offer from Delaware State — his first college offer.