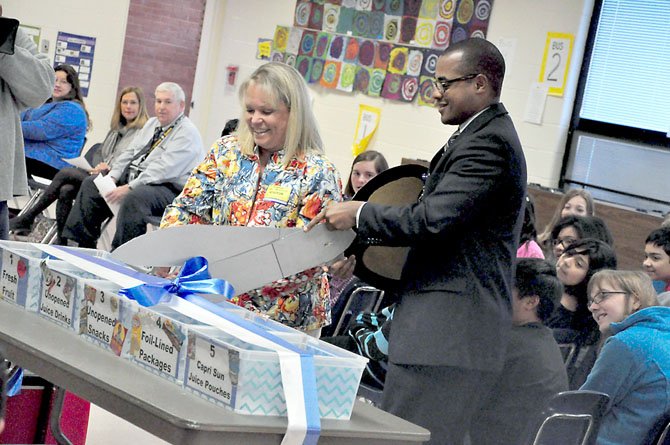 Lisa Lombardozzi, president of LINK, pictured here with Marty Smith, Cluster One assistant superintendent for Fairfax County Public Schools, on March 12, 2012, as they cut the ribbon on the new food donation bins at Dranesville Elementary School. Photo by Alex McVeigh.

For the next three to four weeks, Lisa Lombardozzi will have one eye on spring training in Florida.

Steve Lombardozzi Jr. makes himself useful all over the field, at second base, third base, shortstop and in the outfield. He pinch hits, bats from both sides of plate, and is a stellar defender with a perfect fielding percentage in the outfield.

That’s similar to the way his Aunt plays, making herself useful wherever and whenever she can around Herndon, volunteering to help out with most every cause.

As president of LINK, she assists a group of churches in Herndon and Sterling who provide food to area families who find themselves in emergency situations.

With LINK and In partnership with the Capital Area Food Bank (CAFB), she has started a Mobile Food Pantry program where the food bank delivers pallets of food to a church parking lot in Sterling, and LINK volunteers assemble and package the food, which is given to families in need.

“When we all listen to everything Lisa does, we all think, ‘Gosh, I’m not doing enough,’” said Patricia Dunn Williams, of the Herndon Rotary Club, and founder of GraceFul Care.

“She’s a very busy lady,” said Supervisor John Foust. “She’s been at this for a long time and does a wonderful job.”

“The award goes to somebody who has done an amazing amount of volunteer work,” said Mary Drum, of the Rotary Club.

Lombardozzi organizes coat drives and food drives; arranges holiday gift distributions to more than 800 families in need; has served as President of Herndon Middle and High school PTAs; actively volunteers in Young Life; prepares the newsletter for Herndon United Methodist Church; chairs numerous committees and assisting with community events; and has been the president of the Herndon Woman’s Club for two years.

“To honor her dedicated volunteer spirit and commitment to improving the quality of life in the Herndon community, the Mayor and Town Council of the Town of Herndon, hereby proclaim February 25, 2015 as “Lisa Lombardozzi Day.”

Lombardazzi enjoyed a Rotary Club banquet in her honor that night.

“It’s the way I was raised. My parents said we were expected to be involved in our community,” she said.

“We were taught to love God and love people. I love people so giving back is second nature to me,” she said. “I can’t imagine not giving back with my free time.”

Lombardozzi was a longstanding pantry coordinator for LINK, a local organization providing emergency assistance to those in need, and became LINK’s President in 2011, where she continues to serve.

“It’s expensive to live in this area,” said Lombardozzi. “I don’t know if [families in need are] ever going to make enough money to live in our area. They’ll be struggling every day of their lives.”

Williams said she’s been encouraged by her friend to help find bilingual volunteers who can help LINK field incoming calls.

“She is a leader,” said Williams. “She’s so easy, everyone is her friend. She’s always finding a way to get others to help.

“Everything she touches grows tenfold,” Williams said, “because of her leadership.”

Lombardozzi has earned awards for her civic activism in the past. Supervisor Foust named her to be Lady Fairfax in 2009, a Fairfax County honor.

“Nobody can do anything by herself,” said Lombardozzi. “It takes a lot of people to do things.”

Lombardozzi Jr. left Washington when the Nats traded him to the Tigers with Ian Krol and Robbie Ray for starting pitcher Doug Fister. Last year, he was traded to the Orioles soon before the season began.

Herndon will root with her that Pittsburgh becomes her nephew’s next home.

This General Assembly resolution was patroned by Del. Tom Rust and Sen. Barbara Favola on Feb. 16, 2015.

“WHEREAS, Lisa Lombardozzi has been named the 2015 Citizen of the Year by the Herndon Rotary Club for her many contributions to the Herndon area and her outstanding efforts to assist less fortunate members of the community; and

WHEREAS, a tireless volunteer, Lisa Lombardozzi has been a member of the Herndon Woman’s Club since 2004; she also serves as president of LINK, a group of churches in Herndon and Sterling who provide food to area families who find themselves in emergency situations; and

WHEREAS, since joining the Herndon Woman’s Club, Lisa Lombardozzi has made a difference in the lives of those who need help; she became chair of the club’s Home Life department, organizing coat drives, toiletry drives, food drives, and many more events to assist those in need; and

WHEREAS, Lisa Lombardozzi was president of the Herndon Woman’s Club for two years and also served on the Labor Day Festival committee and the club’s annual fashion show committee; and

WHEREAS, since 2011, Lisa Lombardozzi has served as president of LINK; her dedication and vision have produced great synergy between LINK and emergency support groups in Fairfax and Loudoun Counties; and

WHEREAS, under Lisa Lombardozzi’s leadership, LINK, in partnership with the Capital Area Food Bank (CAFB), has started a Mobile Food Pantry program; the CAFB delivers pallets of food to a church parking lot in Sterling, and LINK volunteers assemble and package the food, which is given to families in need; and

WHEREAS, another innovative way that Lisa Lombardozzi and LINK have harnessed community resources to provide emergency food is through the School Food Rescue Program; volunteers pick up unused perishable food from schools in Fairfax and Loudoun Counties and include it with previously scheduled food deliveries; and

WHEREAS, through these and many other efforts, Lisa Lombardozzi has touched the lives of countless people throughout Loudoun and Fairfax Counties; she has welcomed many new volunteers to LINK’s outreach efforts, and donations have increased so that LINK now serves thousands of people; and

WHEREAS, Lisa Lombardozzi also contributes her time and talents to Herndon United Methodist Church, Young Life, the Northern Virginia Baseball Travel League, and other community and school organizations; now, therefore, be it

RESOLVED by the House of Delegates, the Senate concurring, That the General Assembly hereby commend Lisa Lombardozzi on being honored as the 2015 Citizen of the Year by the Herndon Rotary Club for her outstanding efforts to assist less fortunate members of the community; and, be it

RESOLVED FURTHER, That the Clerk of the House of Delegates prepare a copy of this resolution for presentation to Lisa Lombardozzi as an expression of the General Assembly’s admiration for her dedicated service to the residents of Loudoun and Fairfax Counties.